Weather becomes the story at Hockey Day Minnesota in Moorhead 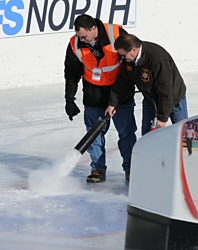 The Clay County sheriff's department came to the rescue with a big canister of carbon dioxide in an attempt to reconstruct the north goal crease (Photos by Tim Kolehmainen).

There was an emergency in Moorhead Saturday afternoon.

Midway through the first period of the Spuds’ game against Hill-Murray at Hockey Day Minnesota, the call went out from behind the Moorhead Youth Arena. We need carbon dioxide, pronto.

Warm temperatures in the mid-30s and intense sunlight had wreaked havoc on Moorhead’s outdoor ice. Hoping to save the game from being shifting indoors, local officials tried virtually everything to keep the game moving.

And I mean everything.

“You just do what you can do out there to play,” said Spuds’ goaltender Michael Bitzer.

The game – and the ice conditions – started off well. But as the afternoon continued, the ice quickly deteriorated.

Midway through the first, the north end goalie crease began melting in the sun and patches of the south blue line began shearing off. Hill-Murray goaltender Tim Shaughnessy, who began the period wearing sunglasses in the Pioneers’ net, soon found himself stumbling through slush that looked more like Minnesota’s 10,001st lake than it did a goalie crease.

He’d have been better off playing boot hockey.

“The crease was so bad in the first period, I couldn’t even skate in it. I had to be on my knees the whole time,” laughed Shaughnessy. “I had to do my best to stay on top of the crease and stay out of it.”

Between the first and second, the Clay County sheriff’s department arrived with a canister of carbon dioxide – and a small cheer from the crowd. After the crease was rebuilt with loose snow, the entire area was blasted with the frigid liquid.

But it didn’t take long for it to fall apart.

“That only takes care of the surface,” said Moorhead coach Dave Morinville. “You really have to blast it. We needed more time to let it set up.”

Early in the second period, Bitzer slid to make a pad save and pushed several inches of slush back out of the crease. As he stood back up, hunks of blue paint from underneath the ice lifted up with him.

After a few more minutes in which Bitzer could barely move side to side, both coaches gave thumbs up to a more radical plan.

They moved the net.

Referees shifted the net six feet closer to the blue line, also changing the location of the treacherous zone from the crease to behind the net. Both goalies took a turn with the new net location, as the teams also switched ends midway through the third period so as to equalize the conditions.

“My angles were completely off after that and the defense kept backing into me,” said Shaughnessy. “We didn’t know what was going on, but we pulled it off eventually.”

Meanwhile, the sun was beginning to take its toll on the blue lines and along the north end boards. For much of the game, players from both teams were either sloshing through melted slush or stumbling over blue lines that had become speed dips.

“The first period, I almost did a back flip out there,” said Hill-Murray defenseman J.D. Cotroneo, who added that there was a “gentlemen’s agreement” that when the puck went into the questionable ice, players let up until it was carried into a more playable zone. “You have to look over your shoulder every time and almost hop over (those spots).”

Not everyone could keep their eye on the soft spots, however. A few players took a heavy tumble when they caught an edge in the ruts, both at the blue lines and in the corners. Thankfully, said Hill-Murray coach Bill Lechner, no one was seriously hurt.

“I understand why they wanted to complete the game because it was such a big event,” said Lechner. “But it was getting borderline worrisome.”

After the game, Hill-Murray’s Zach LaValle limped out of the locker room with a twisted ankle suffered in just such a rut. Yet he only paused a moment when asked whether the game was enjoyable.

“Absolutely. It was still a blast.” 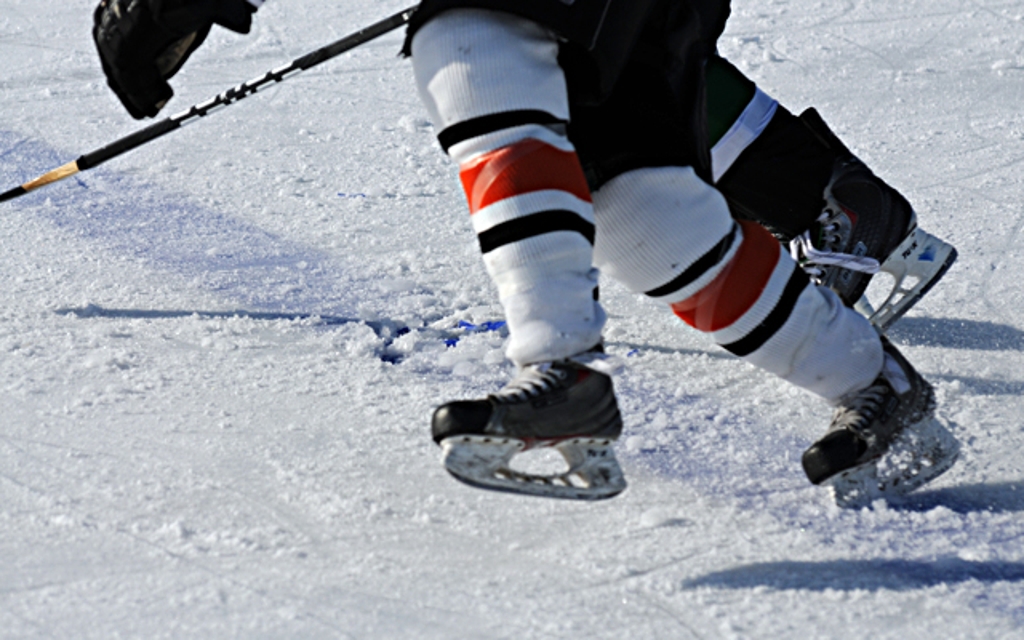 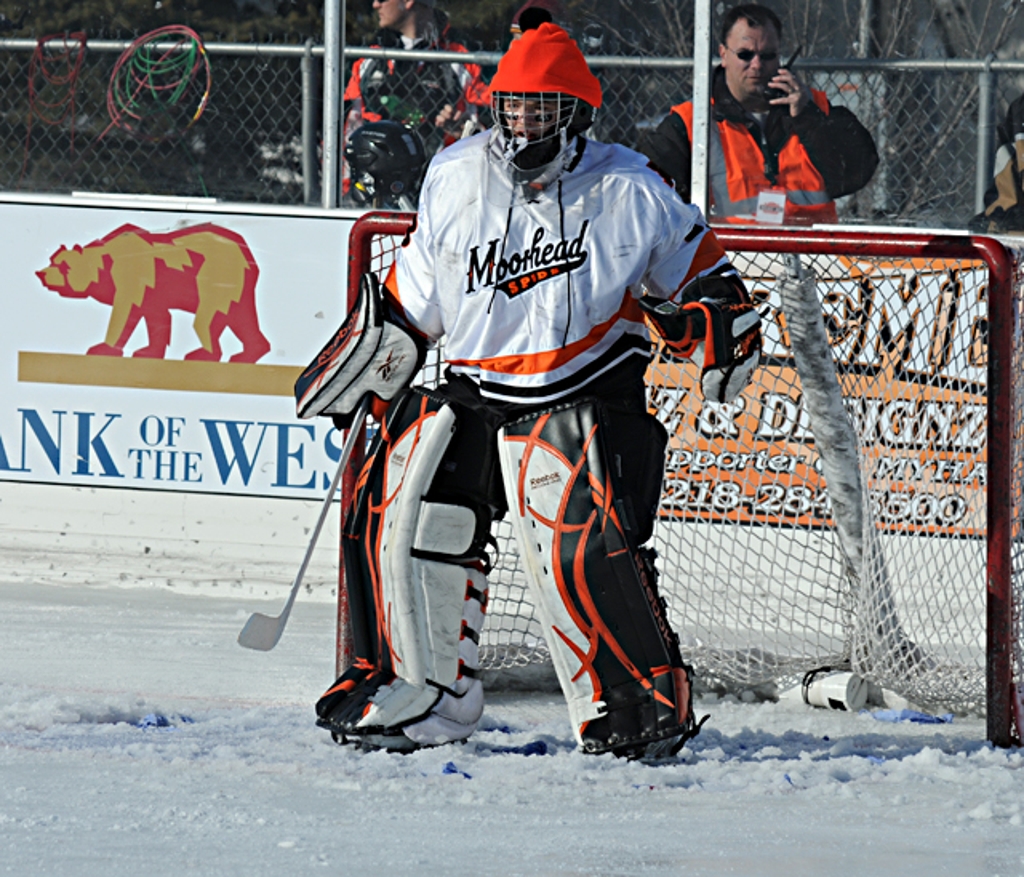 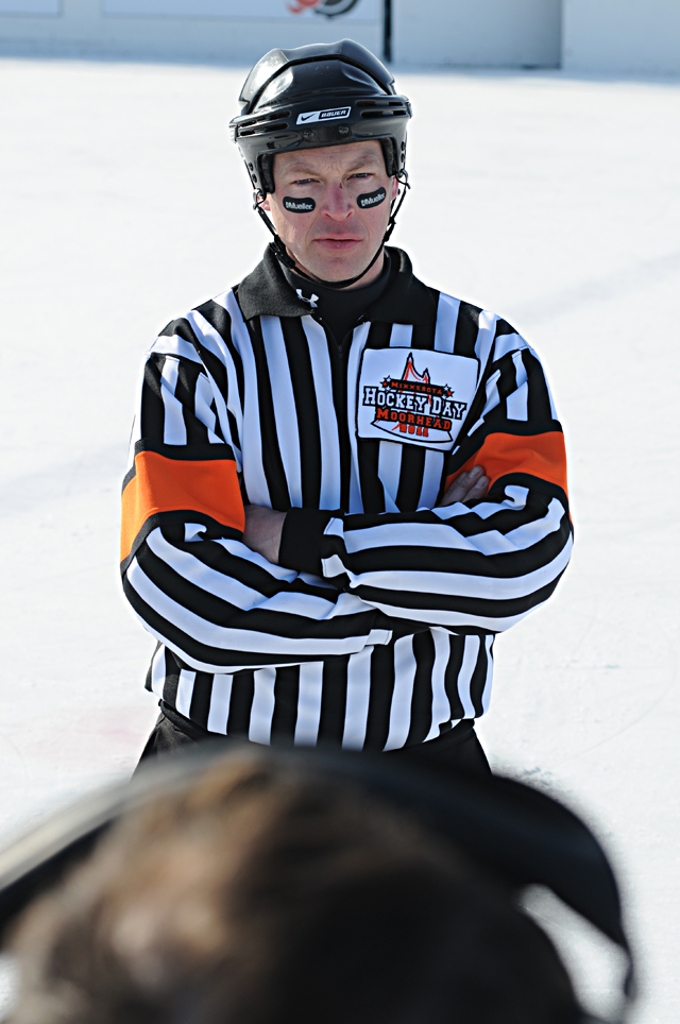 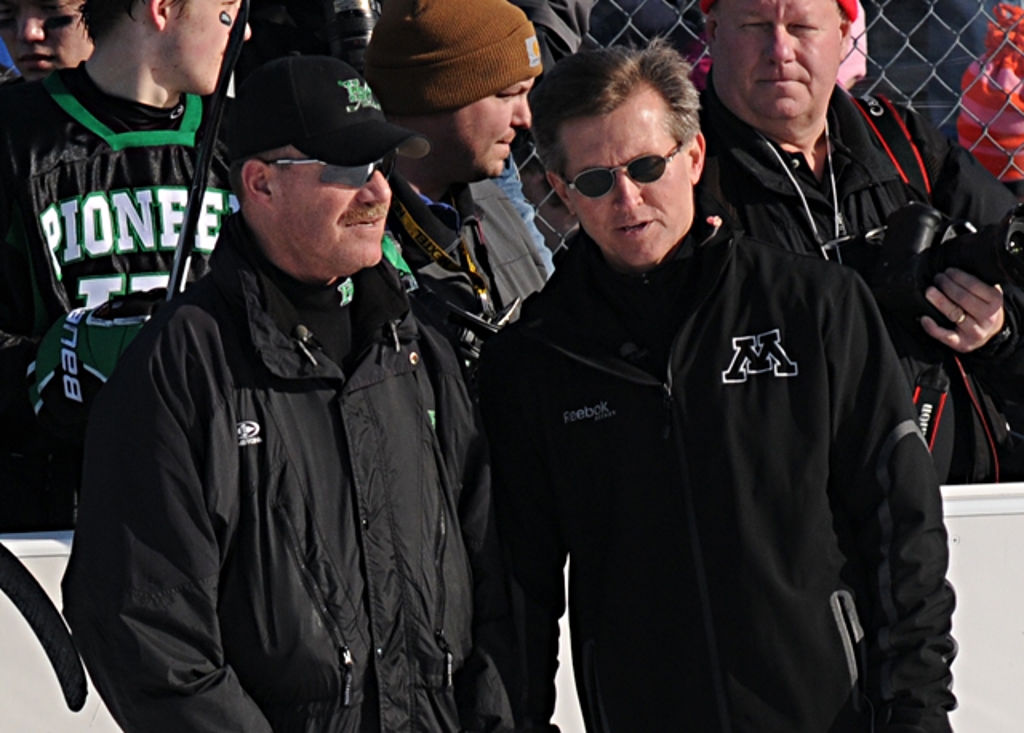