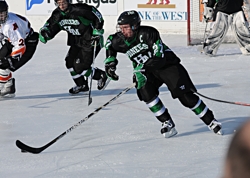 For the fourth straight week, Hill-Murray stands alone as the No. 1 ranked team in the Class 2A rankings.

The Pioneers can attribute their longevity as the state’s top-ranked team to a 12-game win streak including their most recent victory over Moorhead on Hockey Day Minnesota.

Throughout the outdoor game against Moorhead, Hill-Murray coach Lechner repeated his message for the Pioneers.

“Good teams find a way to win,” Hill-Murray goaltender Tim Shaughnessy said following the game against Moorhead. “We had to find a way to prove that we’re a good team.”

The 3-2 victory over the Spuds didn’t come easy, however, as poor ice conditions effected play and extended the game. 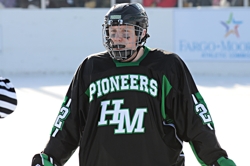 “The last long game we had like that was Minnetonka in four overtimes last spring at the Xcel Energy Center,” Lechner said.

The Pioneers came one goal short of a championship game appearance last year as the Skippers defeated Hill-Murray in one of the most memorable games of the 2010 state Class 2A tournament.

Once again this year, Hill-Murray is intent on reaching the title game.

The Pioneers struggled early in the season, losing two of their first three games, but have bounced back in a big way.

“We say we're not going to be perfect and we're probably not going to go undefeated,” Lechner said. “We've done that in the past, and we couldn't hang on to it.

"We got to state and we had nothing left. We've learned through the years by trial and error that's it's ok to take a loss or two.”

Since the Saturday, Dec. 4, loss to Benilde-St. Margaret’s, Hill-Murray has gone 18-1-1 with the one loss being a close 2-1 defeat to No. 2 Eden Prairie and the one “tie” being a shootout victory over Edina during the Schwan’s Cup Tournament.

For the remainder of the season, that message will inspire the Pioneers to find their way back to the state tournament.

In Class 1A, the Pioneers’ Classic Suburban Conference rival, St. Thomas Academy, remains on top of the rankings.

Hill-Murray and St. Thomas Academy close out the regular season in a conference battle at St. Thomas Ice Arena in Mendota Heights on Saturday, Jan. 19.

The Pioneers extended their win streak to 13 games - with the last four wins coming on the road. Hill-Murray will finish the regular season with two additional more, games including a rematch against St. Thomas Academy who is ranked No. 1 in Class 1A. Senior Ben Bahe, a Mr. Hockey finalist, leads the team in scoring with 46 points (24 goals, 22 assists) ahead of a talented sophomores Jake Guentzel with 38 points (13 goals, 25 assists) and Zach LaValle with 36 points (18 goals, 18 assists).

A day after being named a Mr. Hockey finalist, senior forward Kyle Rau notched his fourth hat trick of the season against No. 3 Wayzata. The Eagles followed the game against the Trojans with a 3-3 tie to No. 7 Minnetonka on Saturday, Feb. 12 -- needing a Luc Gerdes goal with 27 seconds remaining in regulation to send the game to overtime. Eden Prairie closes its season against Lake Conference comepetion at home against Hopkins (Feb. 17) and at Braemar Arena against No. 6 Edina (Feb. 19).

Wayzata rebounded from its 4-3 loss to Eden Prairie with an overtime win over Roseau on Hockey Day Minnesota. The Trojans will be hoping to continue that momentum into their two final games of the regular season when they host No. 7 Minnetonka on Feb. 17 and travel to Hopkins on Feb. 19. Tony Cameranesi -- a Mr. Hockey finalist -- leads the Trojans in scoring with 48 points (14 goals, 34 assists). Senior Andrew McIntyre and sophomore Aaron Dingmann have split time in goal recently.

The Crimson hold a five-point lead in the Northwest Suburban Conference and are currently in the midst of a 13-game unbeaten streak. Maple Grove's last loss came back in December -- a 6-0 defeat against Eden Prairie -- and would be carrying an winning streak if it weren't for a 1-1 tie to Centennial on Saturday, Feb. 5. The Crimson close out the regular season with two home games -- against North Metro (Feb. 15) and Osseo (Feb. 19). Senior goaltender Ryan Coyne owns a 17-3-2 record with a .925 save percentage and is allowing an average of 1.59 goals per game.

The Red Knights fall to the No. 5 spot a week after being ranked No. 2 after back-to-back losses to Spring Lake Park and Shattuck-St. Mary's. The shocking upset to Spring Lake Park came after Panthers' forward Nick Turbitt scored a power-play goal with two seconds remaining. Benilde-St. Margaret's rebounded from the two losses with a 9-0 victory over Irondale and close out the regular season with tough competition -- the Red Knights are at home against Totino Grace (Feb. 13) and at Stillwater (Feb. 19). Senior Pat Steinhauser and sophomore Grant Besse have a combined 95 points (49 goals, 46 assists). Senior defenseman Patrick Daly is a Mr. Hockey finalist.

Edina ended Minnetonka's home unbeaten streak on Thursday, Feb. 10, as the Skippers had not lost at Pagel Activity Center since Jan. 10, 2009. There was no post-game celebration in the vistor's locker room, however, as senior co-captain and Mr. Hockey finalist Max Everson left the game with 34 seconds remaining following an empty-net goal by the Hornets. Everson had surgery on his wrist on Friday, Feb. 11, and hopes to return for postseason action. Edina, meanwhile, marches on with a trip to Buffalo (Feb. 17) and closes out the regular season hosting Lake Conference rival Eden Prairie (Feb. 19).

After losing to Bloomington Jefferson and Edina, the Skippers fall to the No. 7 spot in the Class 2A rankings. A tough three game stretch against Edina, Eden Prairie and Wayzata is followed by Minnetonka's last game of the season against Buffalo. Along with the loss to the Hornets, Minnetonka skated to a 3-3 tie against Eden Prairie allowing the game-tying goal with 27 seconds left. Three underclassmen lead the Skippers in scoring as sophomore Vinni Lettieri has 34 points (14 goals, 20 assists), sophomore Max Coatta has 31 points (14 goals, 17 assists) and junior Eric Baskin has 30 points (19 goals, 11 assists).

The Greyhounds have had an interesting series of three games after losing 3-2 to Blaine (Feb. 5), routing Cloquet/Esko/Carlton 8-1 (Feb. 8) and squeaking by Elk Rive, 2-1 (Feb. 12). Trevor Olson, Jake Randolph and Dom Toninato lead the scoring for Duluth East with 129 points (57 goals, 72 assists). The next closest in scoring is defenseman Nate Repensky with 24 points (3 goals, 21 assists).

Burnsville holds a five-point lead in the South Suburban Conference with two games to play and could challenge Edina for the top seed in Section 2AA. Senior Mike Dockry leads the Blaze's scoring with 56 points (27 goals, 29 assists) and senior goaltender Bodhi Engum owns a 16-4-2 record with a .900 save percentage. The Blaze close the regular season against Bloomington Jefferson (Feb. 17) and Bloomington Kennedy (Feb. 19).

The Wildcats outscored their opponents -- Eastview and Bloomington Kennedy -- by a combined score of 16-3 last week and end their regular season with games against Rosemount (Feb. 17) and Bloomington Jefferson (Feb. 19). A trio of juniors lead Eagan in scoring: Will Merchant with 45 points (28 goals, 17 assists), Michael Zajac with 45 points (19 goals, 26 assists) and Nick Kuchera with 38 points (10 goals, 28 assists). Senior netminder Tommy Bodeker has a 10-5-2 record with an .894 save perecentage.

In their almost typical comeback-style, the Cadets defeated No. 4 Rochester Lourdes 6-5 in overtime on Tuesday, Feb. 8. The Cadets' last defeat was to Hill-Murray (Jan. 27), and on Saturday, Jan. 29, thye host the Class 2A top-ranked Pioneers. How big will the game be? It's a battle for the top spot in the Classic Suburban Conference, it's the Cadets' last home game (aka senior night), their last game of the regular seasonand a chance to avenge an earlier loss and in an always heated rivalry.

The Hawks close out the regular season with a Friday night game against Hibbing/Chisholm (Feb. 18) and are expected to receive the top seed in Section 5A. Garrett Skrbich continues to light up the scoreboard as the senior forward has recorded hat tricks in Hermantown's last two games and has 61 points (37 goals, 24 assists) this season.

Another win against No. 6 Breck this season when Blake travels to Breck School Anderson Ice Arena on Saturday, Feb. 19 would provide the boost the Bears needs to lock up the top seed in Section 2A. Blake scoring led by senior George Ordway who has 53 points (22 goals, 31 assists).

The Eagles wasted no time bouncing back from a 6-5 overtime loss to No. 1 St. Thomas Academy with a 10-1 blowout victory over Owatonna. Rochester Lourdes closes out its regular season with a game against No. 5 Totino-Grace on Saturday, Feb. 19. Only three Eagles are in double digits in goals scored - Jason Samuelson (21), Landon Farrell (14) and Alex Funk (12) - with the next closest being Justin Dewitz (8).

Totino-Grace finishes the regular season with a tough schedule. The Eagles face Class 2A No. 5 Benilde-St. Margaret's in a North Suburban Conference matchup on Tuesday, Feb. 17, and host No. 4 Rochester Lourdes on Saturday, Feb. 19. Sophomore T.J. Roo continues to display scoring skill with a team best 53 points (18 goals, 35 assists).

Breck hopes to make a final push for the Tri Metro Conference championship and the top seed Section 2A. However a Saturday, Feb. 19, matchup against No. 3 Blake stands in the Mustangs' way. Breck is another team led by underclassmen -- especially juniors Conor Andrle (19 goals, 38 assists), Grant Opperman (21 goals, 29 assists) and Wesley Iverson (26 goals, 17 assists). Not to be forgotten is Iverson's brother Keegan who is only an eighth grader but already a strong physical presence.

The Warriors will look to figure out Lake of the Woods goaltender -- and Frank Brimsek Award finalist -- Alex Lyon in their final game of the season. Lyon owns a 15-5-3 record, a .949 save percentage and is allowing an average of 1.44 goals per game. Warroad forwards David Nelson and Nicholas Stoskopf have a combined 54 points (30 goals, 24 assists).

The Hilltoppers have been plagued by inconsistency. A four-game win streak over Eveleth-Gilbert, Cloquet/Esko/Carlton, Warroad and Thief River Falls was followed by a three-game losing streak against Duluth Central, Virginia/Mountain Iron-Buhl and Superior. The Hilltoppers end the regular season with a game against St. Cloud Cathedral on Saturday, Feb. 19.

Little Falls climbs back into the top ten thanks to a seven-game win streak. Junior forward Joey Hanowski, stepping out of his older brothers' shadows, leads the Flyers with 43 points (29 goals, 14 assists). Michael Stumpf ranks third in the state in save percentage (.933) and fourth in goals-against average (1.55).