Fasching, Michaelson notch goal and assist each in victory over Lakeville South 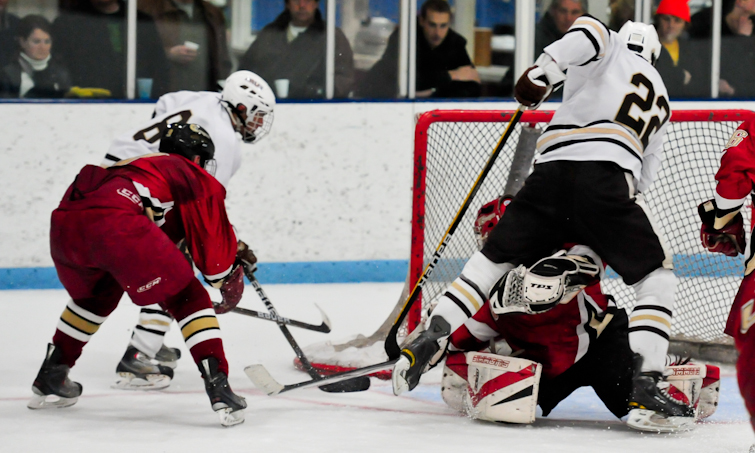 Hayes got great things from his standouts during the 3-2 victory over Lakeville South on Tuesday, Feb. 15, at the Apple Valley Sports Arena.

“This time of year, it’s cliché but you need your big time players to play big in big games,” Hayes said. “(Fasching and Michaelson) were fortunate enough to do that last year and create a little run. Hopefully now this sets the tone for going into our last game on Thursday (Feb. 17) and then into playoffs.”

The two underclassmen had big games as Michaelson scored on a power play opportunity and Fasching tallied the game-winner with less than three minutes remaining in the third period.

“Hudson has been fighting it a little bit trying to find the back of the net and you saw that emotion after he scored the goal,” Hayes said. “He’s been really fighting to get one. Have a big goal like that at a crucial time with a couple minutes left to go in the game, you couldn’t ask for a sweeter goal.”

After carrying the puck deep into the Lakeville South zone Fasching battled his way into scoring position and slid the puck past Cougars’ goaltender Brady Frahm.

“It was the greatest moment,” Fasching said. “I was so happy. I wanted to score so bad. I can’t remember the last time I scored to be honest. I was thinking about that before the game and then I was like ‘Oh, finally’ cause I’ve been trying so hard. (Coach Hayes) told me a couple days before that I had to relax, just play my game and I’d be fine.

As it turns out, Hayes wasn’t the only coach impressed with Fasching’s effort.

“Fasching finished that one,” Lakeville South coach Kurt Weber said. “Big, strong kid worked his way to the net and got it done. That’s what it’s going to take in a game like this – the big kids gotta stand up.”

Perhaps no one in the Apple Valley Sports Arena was more excited to see Fasching’s go-ahead goal than Eagles’ goaltender Aaron Gretz.

“Whenever he gets close to the net like that it’s pretty much an automatic goal,” Gretz said. “So once he got in close and there was no one around I pretty much knew it was going in.”

Fasching also played a role with an assist on Michaelson’s power-play goal which capped some impressive passing with a quick wrist shot that found the top right corner of the net.

“Our power play is clicking right now,” Michaelson said. “Hudson made a nice pass over to me and I buried it up top.”

Gretz made 29 saves in his last regular season home game with Apple Valley but also had the best seat in the house watching Fasching and Michaelson step up.

“They’re unreal,” Gretz said. “You don’t even notice they’re underclassmen, you think that they’re seniors. They’ve been solid for us all year. They’re going to be great once they get older.

“I mean, they’re already are great – but once they get older they’re going to be scary.” 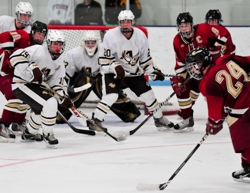 Apple Valley's A.J. Michaelson (No. 19) and Derek Smith (No. 20) give Eagles' goaltender Aaron Gretz an window to see a shot by Lakeville North's Alex Harvey (No. 24) during the Tuesday, Feb. 15, game. Photo by Adam Crane

The last time Apple Valley and Lakeville South met back on Saturday, Jan. 15, the Cougars emerged victorious with a 5-2 win.

Although the Eagles admit the game was not a fluke, they know what was to blame during the loss.

“We watched tape of that game and we just were not impressed with our energy level,” Apple Valley coach Jerry Hayes said. “To credit Lakeville South they had a lot of energy and their big time players played big. They have a couple really dynamic forwards and very good (defense) and they played really well the last time they played us.”

“Last game we came out really slow,” Michaelson said. “I feel like tonight we had more jump.”

“We didn’t come out with any intensity last game and we just didn’t play good at all,” Apple Valley goaltender Aaron Gretz said. “This game we wanted to set the tone early, get ahead, go in there and hit some guys and just pick up the intensity.”

The Eagles did just that scoring the first goal and stepping up in critical points during the game which was played on ‘Senior Night’ that recognized Apple Valley’s senior class – Kris Goodman, Michael Berens and Gretz.

“On Senior Night there are distractions,” Hayes said. “You got kids who are saying goodbye after a lot of these guys have a lifetime of memories growing up here so it’s tough for them to focus with their parents here and everything.

“I thought our kids did a nice job getting ready to play hockey. Lakeville South is a very good hockey team and we feel very good to get the win against them.”

Apple Valley is hoping its recent success will follow them as the regular season comes to an end and into playoffs.

“That was a big win for us,” Apple Valley forward Hudson Fasching said. “We had a big win over Burnsville our last game so we’re trying to keep a streak going and push that streak into Sections and just keep rolling.” 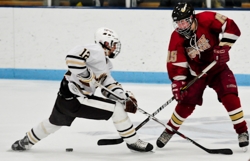 Not to be forgotten on the ice at Apple Valley Sports Arena was Class 2A scoring leader – Lakeville South’s Justin Kloos.

“He’s a heck of a hockey player to watch,” Apple Valley coach Jerry Hayes said about Kloos. “He’s fun to watch on tape but not so fun to watch live (when he’s playing against you).”

Thanks to watching tape from their last game against Kloos and the Cougars, the Eagles made sure to keep Kloos in their game plan.

“We really needed to key in on Kloos,” Apple Valley forward Hudson Fasching said. “We changed our forecheck because he has 70-some points so probably a good idea to mark somebody on him and stay on him the best we could.”

Lakeville South coach Kurt Weber knows the talent he has at his disposal.

“We ride on his back as you can see,” Weber said. “He’s a game changer. He missed the net a couple times tonight but he comes up hard. Everybody’s watching him. To his credit, he continues to work extremely hard. He’s extremely intelligent on the ice. He’s not big but he’s got all the other gifts and he makes up for (his lack of size). He generates a lot of offense and he’s a good team leader.

“He plays really well with (Alex) Harvey and that first line does a nice job. He actually plays pretty well with our defense – you’ll see (Drew Brevig) jump in the play and those two guys have learned to work together. Drew’s our third leading scorer as a defenseman, he’s got 40-plus points and you can see how that works. Justin is smart enough to use guys all over the ice and he draws a lot of attention so we gotta do a little bit of a better job of getting other guys to step up. Our second and third line did that in the third period.”

Kloos definitely drew the attention of Hayes during the Tuesday, Feb. 15, game as well.

“The first thing (about Kloos) is, it’s the ‘Shaquille O'Neal mentality’ – you can’t control him, you just hope to contain him – but thankfully he’s not Shaq cause that would really make things ugly,” Hayes said. “He’s a heck of a hockey player. The nice thing about him is that he’s so unselfish. You really see that. He looks for other people, he finds the quiet spots, he uses his speed extremely well. He’s fun to coach against cause it’s a challenge for your team. I’d like to think A.J. and Hudson have a similar challenge for other teams during their game planning cause they’re pretty dynamic in their own right.

“Justin, with the year that he’s having, I can’t think of anyone that’s having a better year than him right now including some of the guys that are Mr. Hockey candidates. It’s pretty impressive the year he’s having which is a credit to him and the Lakeville South coaching staff.” 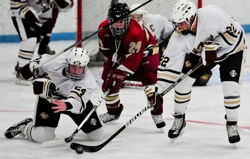 The 3-2 loss to Apple Valley on Tuesday, Feb. 15 may not have been what Lakeville South was hoping for, however the Cougars still feel they are in a good position heading into the final game of the season.

“For us this is what we expected at this time of year,” Lakeville South coach Kurt Weber said. “They’re right in the same boat we are. We’re trying to push for the State Tournament. They have a realistic option to get there and so do we. For us, this is where we want be and this is who we want to be playing at this time.”

Lakeville South outshot Apple Valley 31-28 including a flurry of shots during the last 1:51 in the third period after pulling goaltender Brady Frahm for an extra skater.

“We had our opportunities,” Weber said. “We missed a lot of chances especially in the slot at the end. Some of the chances - you wonder how they didn’t end up in the net but that’s the way it is. When you run into a good team you wanna be in a position to put the puck in at the end and we had our chances but it just wasn’t our night. The puck didn’t bounce our way and to their credit they’re a good team. We knew we’d have to play well all the way to the end and that’s what it took but we just couldn’t quite get it in at the end.”

The Cougars close out the regular season with another South Suburban matchup at Apple Valley Sports Arena. This time – on Thursday, Feb. 17 – Lakeville South will faceoff against Eastview.

“For us we’re just focused on finishing with Eastview, continuing to play well and that’s all we worry about,” Weber said. “We talk to our kids all the time about playing the level that we’re capable of. We did that tonight in all three periods pretty consistently.”

Hudson Fasching and A.J. Michaelson each had a goal and an assist and Aaron Gretz made 29 saves as Apple Valley squeaked out a 3-2 victory over Lakeville South on Tuesday, Feb. 15, at Apple Valley Sports Arena.

Fashing notched the game-winner with 2:41 left in the third period and also assisted on Michaelson's game-tying goal which came on a power-play opportunity.

Lakeville South's Justin Kloos provided an assist on both of the Cougars' goals that were scored by Alex Harvey and Calvin Boecker.

Both teams close out the regular season on the road on Thursday, Feb. 17, with South Suburban play. Lakeville South heads back to Apple Valley Sports Arena to take on Eastview and Apple Valley will faceoff against Lakeville North at Ames Arena. 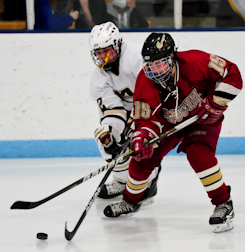 1. Hudson Fasching, Apple Valley
After being held out of the goal scoring column for five games, Fasching snuck a shot past Lakeville South goaltender Brady Frahm in the third period for the game-winning goal. The sophomore forward also assisted on A.J. Michaelson's power-play goal.

2. A.J. Michaelson, Apple Valley
Michaelson commanded the attention of Lakeville South whenever the junior forward was on the ice. Michaelson assisted on the game's opening goal and scored a pretty power-play goal that found the top right corner of the net.

3. Justin Kloos, Lakeville South
Despite not scoring a goal Kloos played a factor in both of his team's goals registering an assist on each score. The junior forward received extra attention from Apple Valley defenders and the Class 2A scoring leader still managed to find the score sheet. 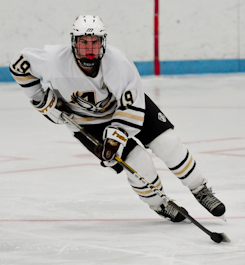