Looking back at the fifth annual Hockey Day celebration from Moorhead

After being selected as the host city, the Moorhead hockey community quickly came together in full force to to plan and execute the fifth annual celebration of the State of Hockey’s namesake sport. 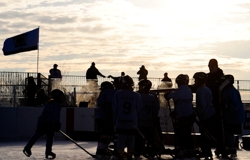 Although the gates opened at 8 a.m. – a full two hours before the opening faceoff of the first game between Wayzata and Roseau – parking lots were already overflowing and hockey fans made their way to the outdoor rink by the busload.

“It really is exciting,” Wayzata coach Carl Davis said. “We had such a fun day. Just the whole anticipation of this big event as the whole week evolved it was so much to look forward to. It turned out the weather was great, the crowd was great.

“It’s been just a perfect day. The players are going to look back on this day with such good memories.”

Fans came from across Minnesota to take in the action. They came from the Minneapolis-St. Paul area to Grand Rapids to the U.S./Canadian border.

Whether it was the outdoor game that will provide the most memories or playing on television, players and coaches alike wore mile-long smiles after the games.

“It was probably the most fun I’ve ever had playing hockey outdoors,” Roseau goaltender Jared Strand said. “It was really fun.”

“It’s just a blast to be out there on FSN, playing with all your buddies – it’s definitely a once in a lifetime opportunity,” Wayzata defenseman Marc Richards said.

Just like the post-game smiles, the memories weren’t just for the players.

“It was a once in a lifetime experience,” Roseau coach Andy Lundbohm said. “You couldn’t ask for a better day. You don’t get many opportunities to do something like that so the kids were really excited about it.”

By the time the hometown Spuds took the ice for their game against Hill-Murray, several thousands of fans surrounded the outdoor sheet of ice.

The bleachers were completely filled with fans needing to stand on their seats to see the action and standing room around the boards ran four-people deep.

Some fans took matters into their own hands building 'bleachers' out of chunks of snow, giving them a boost over the other passionate hockey spectators.

Yet, all four programs recognized that the event was larger than the high school games and made possible through hard work.

“We really are very grateful and thankful for all the Moorhead community and everybody involved,” Hill-Murray coach Bill Lechner said.

“It made it a big event that was fun for these kids that they’ll remember for a long time.” 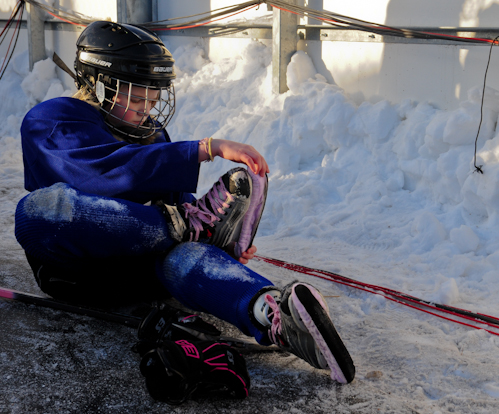 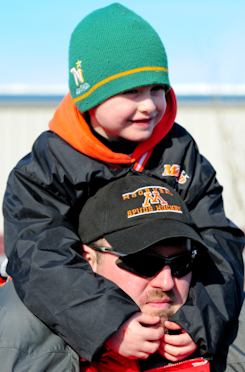