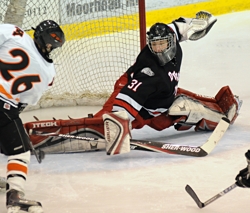 The top two seeds in Section 7AA, No. 1 Duluth East (18-5-0) and No. 2 Grand Rapids (21-3-1), have combined to win seven of the last eight section titles -- and they certainly appear primed for a showdown in the final this winter.

That trio has been leading the way for the 'Hounds all winter, although coach Mike Randolph knows he needs a more balanced lineup to make a deep playoff run. It's easy to be impressed with the top line, as its combination of puck control and passing skills is unmatched. When they get the puck, they just don't let it go.

"That's the way we have to play," said Randolph. "We have to move the puck and move without the puck. We contantly tell them to give and go and when you go, you go.

Grand Rapids also has its share of youth playing key roles, beginning with freshman forward Avery Peterson (7-15-22) and sophomore defenseman Jake Bischoff (4-17-21), the son of former University of Minnesota star Grant Bischoff. They helped the Grand Rapids Bantam A team reach the state tournament last winter and hope to do the same on the varsity. 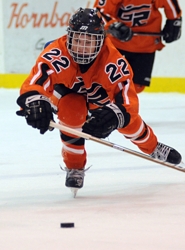 Grand Rapids sophomore defenseman Jake Bischoff (22) has been a great addition to the Thunderhawks' lineup (Photo by Tim Kolehmainen).

There are a few teams who could throw a wrench into the seeding, perhaps none more threatening than No. 3 Cloquet/Esko/Carlton (16-8-0). The Lumberjacks boast of a high-scoring line of Jack McFarlane (20-31-51), freshman sensation Karson Kuhlman (15-33-48) and Duluth East transfer Nolan Meyer (32-15-47), who leads the team in goals.

The Lumberjacks also have a history of pulling section upsets, particularly over Duluth East. Despite an easy 8-1 Greyhounds' victory in their last meeting on Feb. 8, East fans are likely breathing a bit easier knowing Cloquet is in the other half of the bracket.

Still, Duluth East and Grand Rapids appear the prohibitive favorites.  Cloquet is winless in four games against the top two seeds and has been outscored 20-5. 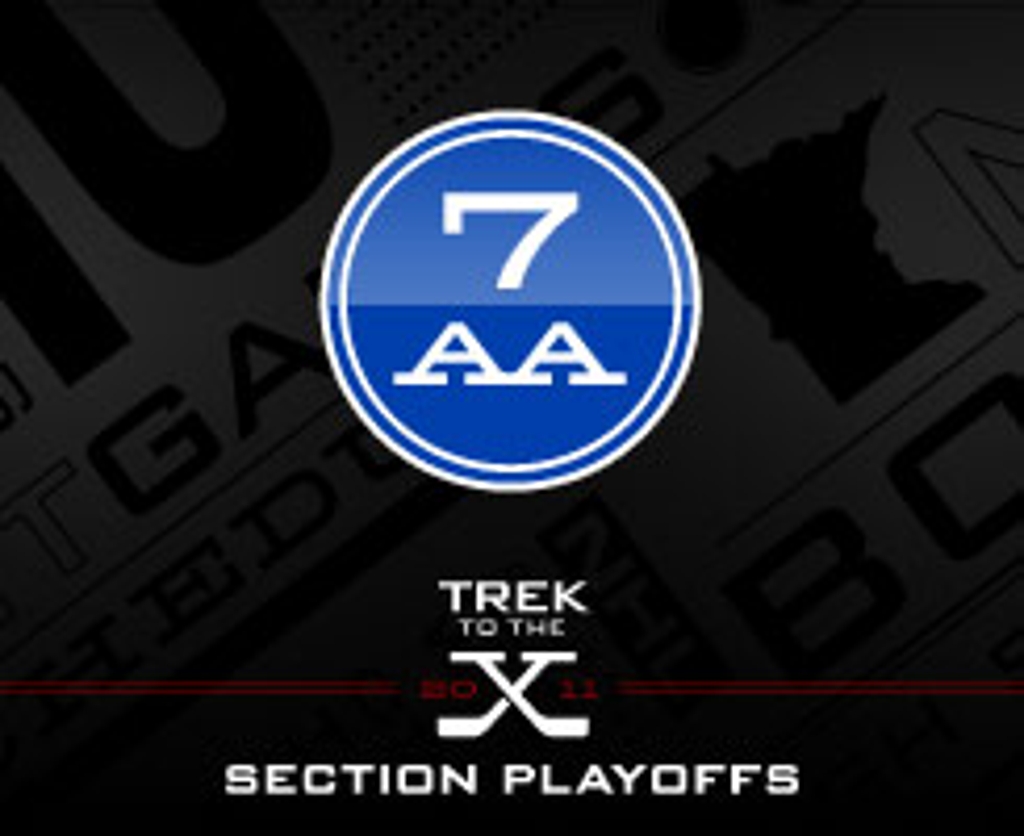 The top-seeded Greyhounds swept every Section 7AA opponent this winter, including a 2-1 victory over No. 2 Grand Rapids in mid-January.  Duluth East's top line of Jake Randolph, Trevor Olson and Dom Toninato has been carrying the scoring load with 65 goals. More balance would make the Greyhounds not only a section contender, but a state one as well.

The No. 3 Lumberjacks have been the kings of bracket busting in recent memory, particularly when it comes to knocking off No. 1 Duluth East.  Cloquet wouldn't play the Greyhounds until the finals, but it could happen.  The Lumberjacks also have a dangerous first line of Jack McFarlane, Nolan Meyer and freshman sensation Karson Kuhlman, who have combined for 67 goals this season.