The Devils are in the details 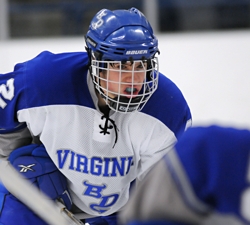 Virginia/MIB's Troy Nichols is one of four Blue Devils with at least 10 goals this winter (Photo by Tim Kolehmainen).

Welcome to arguably the deepest section in Class A hockey, where as many as half a dozen teams legitimately feel they can win the title. Section 7A has been a gauntlet to run for the eventual champion and that only increased this winter when No. 3 Duluth Central (12-13-0) powered up with its Denfeld brethern.

Virginia/Mountain Iron-Buhl (18-7-0) has advanced to state each of the last two years and gained the No. 1 seed this winter, courtesy of a season-ending 4-0 victory over No. 2 Hibbing/Chisholm (14-9-2). The two Iron Range powerhouses have a heated rivalry that combusts from time to time. If both avoid upsets, it could be a terrific section final.

The Blue Devils are led by Mr. Hockey finalist Garrett Hendrickson (27-45-72), the son of coach Keith Hendrickson. A true rink rat, the younger Hendrickson plays a solid two-way game and is a devil on the power play, netting 13 goals with the man advantage this year.

As a team, Virginia is hitting on 30.8 percent of its power plays, an impressive number. In addition to Hendrickson's baker's dozen, Travis Eddy (17-28-45) and Tom Norlander (19-8-27) each have six power play goals and rugged and tough defenseman Wes Judnick (9-28-37) has four. Virginia also has 12 shorthanded goals, six from Hendrickson.

The Blue Devils aren't alone in enjoying a high-powered special teams unit. Hibbing/Chisholm is even better with the man advantage, scoring at a 34.3 percent clip.

Sophomore Adam Johnson (34-36-70) has been among the state's leading scorers all season. He's an incredibly shifty and gifted offensive player. Linemates Nick DeCenzo (21-48-69), the son of coach Mark DeCenzo, and Joe Anderson (16-28-44) have combined for 30 power play goals.

The key to beating these two juggernauts is to stay out of the box. 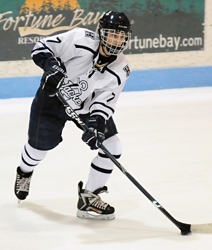 Hibbing/Chisholm's Adam Johnson has been among the state's leaders in goals and points all season (Photo by Tim Kolehmainen).

Duluth Central may have a chip on its shoulder after receiving the No. 3 seed. The Trojans beat Hibbing head-to-head in mid-January, a 4-2 decision that many thought would net them the No. 2 seed. But an otherwise up-and-down season with a sub-.500 record relegated Central to a spot below the Bluejackets.

No. 5 International Falls (10-14-1) hasn't had the success of recent years, but the suspension of key players for two weeks at midseason hasn't helped with consistency. The Broncos are an annual contender, although scoring (2.92 goals per game) could be an issue. 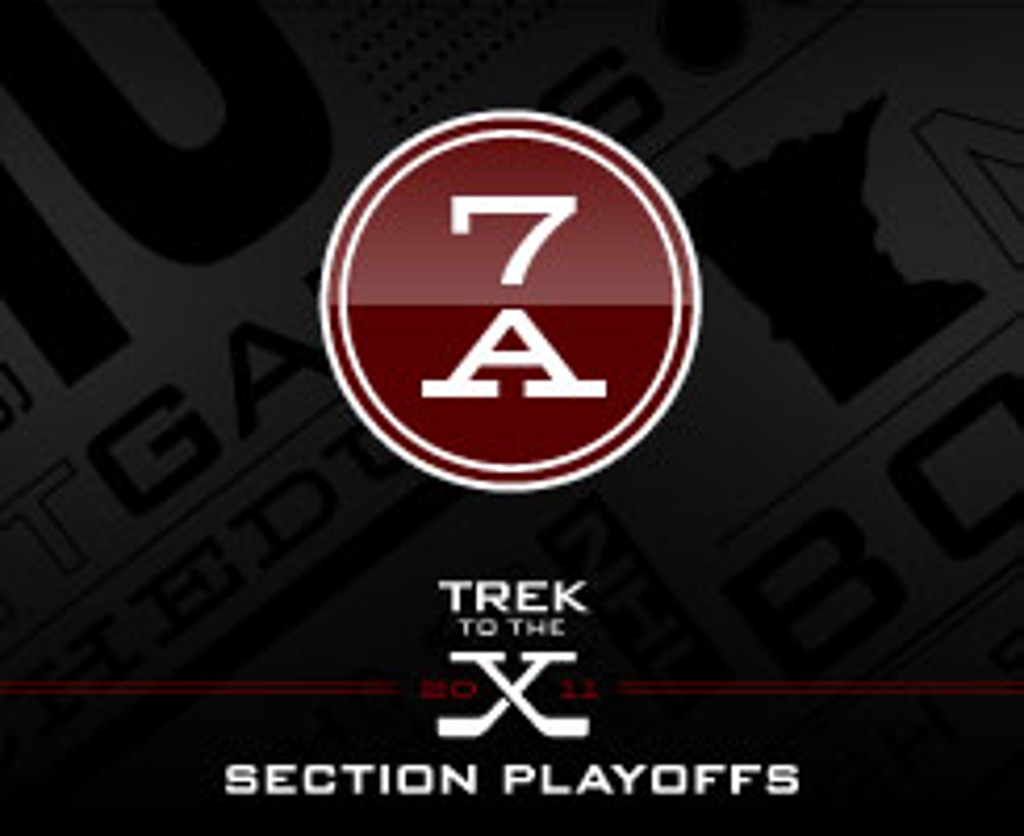 The two-time defending Section 7A champions earned the No. 1 seed again this winter.  Coach Keith Hendrickson's club just seems to know when to gear up for the playoff drive and this year should be no different.  Section 7A will be a battle, but the Blue Devils are tested, particularly senior Garrett Hendrickson.  The coach's son is committed to St. Cloud State and has 72 points on the season.

Frostbite Falls is a tough team to figure out this year.  The perennially strong program endured a tough midseason slump when several key veterans were suspended for a two weeks.  The Broncos seemed to emerge from that lull with a vengeance, yet stumbled down the home stretch with three straight losses.  Past history says don't overlook I-Falls, no matter the record.