On senior night in Moose Lake it was mostly the Cisar brothers that stole the show, taking 15 out of 18 points scored by Moose Lake Area in a 9-3 win over Two Harbors. 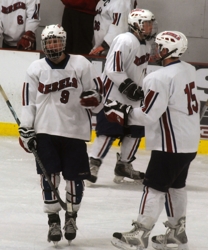 Tyler Cisar came into the game with 68 points on the season, just four points away from holding sole possession of the school record for most points in a single season. It took barely ten minutes of the first period to reach that feat. Cisar scored his second goal of the period, after assisting on another two goals, at the 6:50 mark to notch his 72nd point of the season.

“It definitely feels great to have the school record,” Moose Lake’s Tyler Cisar said. “I play with my brother and my cousin so we got some chemistry and they helped me get my five goals today and throughout the season to get me the 75 points.”

“I was definitely nervous to start the game but I got that first goal just seven seconds into the game, but that gave me some confidence and I started to light it up from there,” Tyler Cisar said.

Two Harbors’ Ben Ruberg sat out the first period as part of a punishment for misconduct issues committed off the ice, and it was very apparent the difference between the first period and the rest of the game for the Agates.

“He’s our go-to-guy so when he goes we go,” Two Harbors coach Steve Wasko said. “Ben’s been part of 76 percent of the goals we’ve scored this year – he’s been on the ice for them. Obviously it hurts but we had some things to take care and we did that. We just got behind the eight ball by six [goals] early.”

The rest of the scoring took place in the second period, including three more goals for the Rebels (two of which belonged to Tyler Cisar – a power-play and shorthanded goal) and three goals for the Agates. Ruberg figured in on all three goals with one goal and two assists. The two Agates’ goals were both scored by Austyn Wasko.

The third period consisted of three penalties and no goals and running time as the Rebels had a six goal lead.

“We’ve had four games in six days as of late so we’ve got a lot action, but we’re going to get back at it tomorrow after school and have a good practice,” Moose Lake coach Josh Gamst said. “Maybe we’ll have a light practice on Saturday, and then a nice long practice on Monday and we’ll go over the essentials of power-plays and penalty kills.”

“When you only win three games all year there’s not a lot of pressure on you,” coach Wasko said. “All the pressure is on Silver Bay and we’ve just got to come out and play with some pizzazz, and play to win the game – not to lose the game. If you can’t get up for this game then you probably don’t have a pulse.”

1. Tyler Cisar, Moose Lake Area
Cisar scored three goals for the hat trick and assisted on another two in the first period alone en route to a seven point night. Cisar also scored a power-play and shorthanded goal in the game. Cisar broke the Moose Lake school record for points (72) and finished with 75 points this regular season.