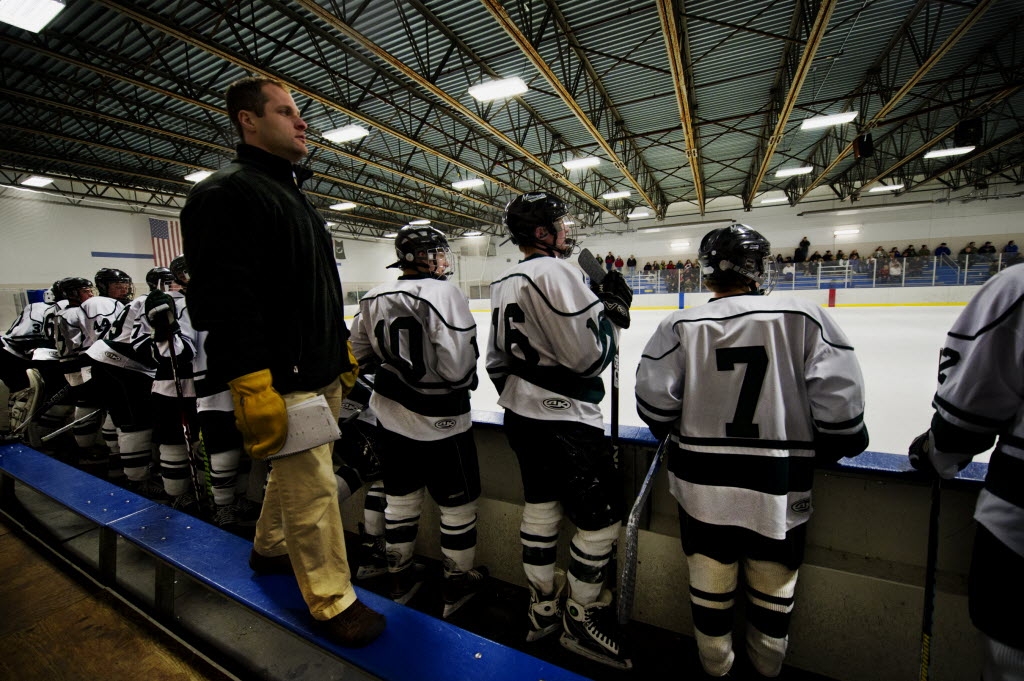 Benny Bissonette laughed about how recent changes to the Minneapolis high school boys’ hockey landscape altered his view of former rivals. As a Southwest student playing for Minneapolis West the past few seasons, Bissonette geared up for games against rival Minneapolis East — the other of the two teams drawing players from seven Minneapolis public schools.

This year, with numbers dwindling even more — way down from a heyday when individual schools put teams on the ice and Minneapolis routinely had a representative in the state tournament — Minneapolis merged into one team comprising all the city schools called the Minneapolis Novas.

Now Bissonette finds himself on a line with former East twins Alec and Jack Kelly, players from South High School he once “tried to get into fights with.”

But instead, bringing the teams together gave the Novas some punch; they are 18-2-4 heading into Saturday’s regular-season finale — using depth and a sense of unity and purpose to succeed.

“It’s a little sad Minneapolis is down to one team,” Bissonette said. “But it’s also exciting to have more competition in practice and to be more competitive in games. Everyone is way more into it.”

For 35 consecutive years (1946-80), Minneapolis had a team in the state tournament — highlighted by Southwest’s 1970 championship. But in 1981, the Bloomington schools were moved into Region 5 and began dominating the city teams. Since then, Roosevelt (1992) and South (1993) made it to the Tier II tournament and Edison made it in Class 1A in 1994. That’s been it.

As hockey families opted to send players to private schools or moved to the suburbs, city programs fought a losing battle for survival. Roosevelt dropped hockey in 1997. Edison followed in 2005. Remaining schools relied on co-ops. The East-West model was adopted for the 2006-07 season, but after four years of mediocre hockey and stagnant growth, a single team became necessary.

Former East coach Bill Ross summarized the concerns of some over the further contraction when he said, “The worst thing about having one team is that it’s too close to zero.”

But this year’s rejuvenation is a good start. Time will tell how much the success will boost the profile of city hockey.

The more than 40 players on either the varsity or JV represent the city’s south side. Half the team comes from Southwest, with South and Washburn each adding a quarter of the players.

First-year coach Shawn Reid calls himself a “realist, not a pessimist.” He does not expect the city’s hockey demographics or single-team model to change any time soon. Encouraged by large numbers of youth players at the Pee Wee and Mite levels, Reid is working to make the Novas their desired destination. Players from the Minneapolis Storm youth program came out in large numbers for the team’s alumni game at Parade Arena.

“Now that we’re competitive, I think we’re getting people to question whether or not they want to play in Minneapolis a little more,” said Reid, a Lakeville native and former Southwest assistant coach. “Our success is making that buzz a little louder. People are seeing results can occur when everyone works together.”

Players credited a December trip to Eveleth for fusing bonds. The Novas defeated two Iron Range teams, Greenway and Eveleth-Gilbert, en route to a holiday tournament championship. Playing teams such as North Branch and Pine City, the Novas have remained near the top of the Two Rivers Conference all season.

The approaching section playoffs present a giant challenge. The Novas reside in Class 2A, Section 6 along with top-10 teams Benilde-St. Margaret’s, Eden Prairie, Minnetonka and Wayzata.

Reid said opting to play in Class 1A would be inappropriate, given the overall enrollment of the seven schools in the co-op. And trying to drop down for competitive reasons, he said, is an argument many programs could make.

Pride is a major part of Reid’s pitch to get players excited about the Novas. The team is not a collection of players unable to get themselves into a better hockey situation. Rather, they are young men who are serious about hockey and believe in competing hard for their hometown. And while it’s been only one good season, it’s a start.

“The kids that do get out of here think, ‘It’s Minneapolis and they’re not going to do too well,’” said Zach Austin, a junior forward who attends Washburn. “But we’re proving that we can put together a good team.”

Said Bissonette: “We knew there would be a lot of eyes on us. We felt some pressure to be good because there used to be five good teams from Minneapolis.”