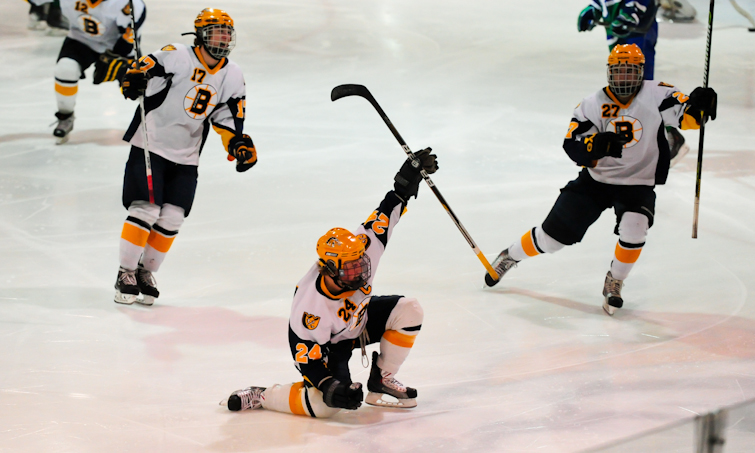 Breck forwards Jack O'Connor (No. 17) and David Zosel (No. 27) join Austin Rudnick (No. 24) as the junior defenseman celebrates his second-period goal during the Saturday, Feb. 19, game against Blake. Photo by Adam Crane

Breck junior goaltender Jack Kenney may be proof that anything can happen.

Kenney made 27 saves during his tenth varsity start to help the Mustangs defeat Blake, 5-1, on Saturday, Feb. 19. 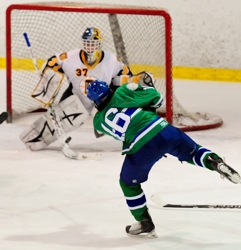 Blake senior forward George Ordway (No. 16) sends a shot on goal and Breck goaltender Jack Kenney (No. 37) during the Saturday, Feb. 19, game. Photo by Adam Crane

“It was a big game, huge game,” Kenney said. “The fans were going crazy so that’s awesome to have. We just worked hard and it’s good to come out with the win.”

“I heard two weeks ago that I was going to be playing the next three games depending on how I performed throughout the week,” Kenney said. “Every day is a tryout and everything can change – I started on JV this season so I’m just trying to work hard and keep it going.”

The junior has settled into the starting role on varsity and was called upon for a big performance against Blake – a conference and section rival.

“It’s always this way,” Breck coach Les Larson said. “Blake against Breck – you throw the record books out. It always has implications on the conference championship.

“That was part of our goal at the start of the season but the more important thing is that we’re playing well now going into sections because our big goal is to get to St. Paul.”

Although owning the early momentum, Breck surrendered a first period goal to Blake which could have set the tone for another Bears’ victory.

“I thought we had the momentum before that but then we just had a little bit of a letdown,” Larson said. “Thank goodness we had the character to keep our heads and come back and keep doing what we were doing and it worked.”

The packed crowd at Breck School Anderson Ice Arena watched as the Mustangs battle back by scoring five unanswered goals.

After ending the first period with a 1-1 tie, Breck junior defenseman Austin Rudnick netted the eventual game-winner 1:40 into the second period and set the tone for the remainder of the game.

“It all started off with (David) Zosel’s win on the draw – we’ve been struggling with the draws lately,” Rudnick said. “Zosel won the draw gave it back to Keegan Iverson, our eighth grade defenseman, and before the faceoff he said if he gets it he was going to dish over right away. He dished it over and we’ve been working on one-timers in practice so I just let one go.” 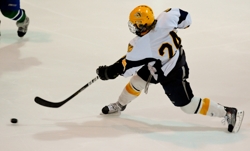 Breck junior defenseman Austin Rudnick (No. 24) fires a shot on net during the Saturday, Feb. 19, game. Photo by Adam Crane

Rudnick’s shot topped the radar in a game where shots were known to pack a punch.

In the third period, Kenney faced 12 shots – several of them coming on Blake’s power play – with one being felt more than others.

“Someone took a shot from the goal line and it hit my dangler and it just snapped it in half,” Kenney said. “I didn’t notice it until two whistles later and the ref called me out on it. I have another mask in my locker just in case something like that happens. I used Max’s mask for two minutes and then coach brought over my backup mask. Then I used my back up mask. Then he took a new dangler that we had in the locker room and put it on my original mask and I used it again.

“So three masks in one game – that’s something I’ve never done before.”

Don’t expect the goaltender to make it a tradition or ritual, however.

The win sends both teams into Section 2A playoffs as Blake and Breck will most likely be up for the top seed, leading the other team to earn the second seed.

“It’s always been a rivalry ever since I was a freshman,” Rudnick said. “It’s been nuts whenever we play them. They got us one early in the season and it felt good to get them back before playoffs start.”

As if two regular season matchups between Breck and Blake in Tri Metro Conference play wasn’t enough, the two rivals may meet again in the Section 2A playoffs.

“Well at this point it doesn’t matter who you play, you just have to play your game,” Blake coach John Hamre said. “So if you’re worried about who you’re playing, it’s the wrong mindset. You gotta be focused on if you’re playing your best hockey no matter who you play. (Breck) is a good team in the section, there’s lots of good teams in the section and we’re just going to focus on making sure our team is ready.”

Breck coach Les Larson knows the road ahead is not an easy one.

With aspirations to make it to the state tournament, both teams are preparing for tough section playoffs.

“We want to play our best hockey in the playoffs,” Hamre said. “That’s always the goal every year. That’s every team’s goal in the section. We know it’s going to be a real competitive section playoffs.”

Even heading into postseason play, Breck is sticking with what it knows best.

“Stay with the basics,” Larson said. “We’re kind of like Cal Ripken taking 6o ground balls before every game. It’s fundamentals, it’s concentrating on what you’re good at, do the basics great and everything goes from there.”

After winning the Class 1A championship the past two seasons, Breck is hoping their youth will not hinder a ‘three-peat’ effort.

“It’s going to be nuts,” Breck defenseman Austin Rudnick said. “We’ve got a bunch of young guys – they’re probably going to be a little nervous but it’s all part of it. Once they get their first shift out the way, we’ll be back to how we’ve been playing lately.”

“One of the things that we tell our young players near the end of the season is ‘you’re not a freshman anymore because you got 24 games under your belt,’” Larson said. “That kind of strikes home. The season is 118 days long if you go to the state tournament – that’s four months. There should be a difference from beginning to end.”

Junior goaltender Jack Kenney made 27 saves for the Mustangs.

Blake senior goaltender Ryan Hayes made 22 saves in the loss.

Up next for both teams is section play with the first seed up for grabs between the Blake and Breck. The squad not chosen as top seed will most likely receive the second seed setting up a third matchup between the teams for the Section 2A Championship and a trip to the State Tournament. 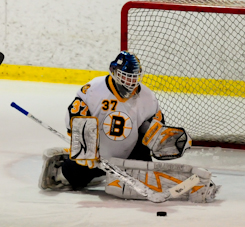 1. Jack Kenney, Breck
The junior goaltender made 27 saves and weathered a flurry of Blake shots on the power play - one of those shots broke Kenney's throat protector. Kenney switched masks but maintained the solid groove he settled into after surrendering a first period goal.

2. Austin Rudnick, Breck
The junior defenseman unleashed an absolute cannon that found its way past Blake goaltender Ryan Hayes for the eventual game-winning goal. Rudnick played well - and often, racking up several minutes - at both ends of the ice playing shutdown defense as well as creating multiple chances on offense.

3. Ryan Bullock, Blake
The senior co-captain displayed excellent skill on defense and impressive stick handling. With his team down, Bullock maintained high work ethic especially hustling back to break up a breakaway chance by Breck. Dartmouth will be pleased with their recruit when Bullock attends next year. 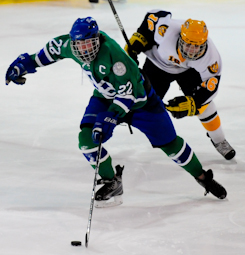