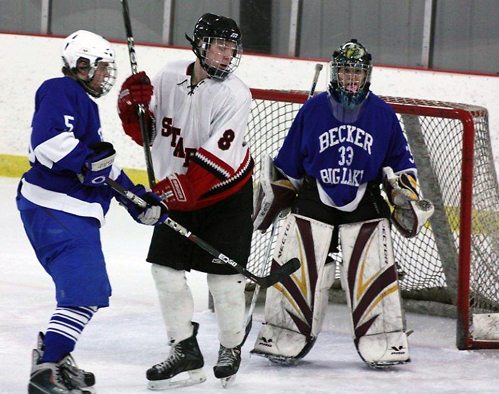 Alex Darsow checked the clock when he walked into his house late Saturday night.

That’s pretty late for a guy who had to be at work in eight hours.

Darsow, Becker/Big Lake’s junior goaltender, made it to the Nike Factory Store in Albertville on time, although he admits he was moving a little slowly.

Darsow had, after all, made an astounding 102 saves Saturday night (Feb. 19) against River Lakes in a first-round Section 8AA playoff game.

“It looked effortless almost,” River Lakes coach Jeff Melby said after his Stars won 4-3 in triple-overtime at River Lakes Civic Arena in Richmond. “Our kids were going, ‘What do we have to do to score?’ ”

Darsow’s performance had coaches from both teams checking the Minnesota State High School League web site to see if the save total was a state record. The site has two entries for “Most Stops Overtime Game.”

Ryan Sandersfeld of Fairmont is credited with 66 in a game against New Ulm in 2008. Karl Goehring of Apple Valley is listed as having 65 in 1996. While the opponent is not listed, Goehring’s total came in the state tournament against Duluth East, an epic five-overtime, 5-4 semifinal victory that lasted a state tournament record 93 minutes, 12 seconds of elapsed time.

The official scoresheet from Saturday’s game shows the period-by-period line on Darsow’s saves as 20-26-22-10-21-3. While the total saves were added up incorrectly and listed as 111 on the scoresheet, both Melby and Becker/Big Lake coach Jon Samuelson attested to what they believe is the accuracy in the period-by-period totals.

“We were keeping the shots on our bench as well, and we had it at about 126 shots,” Melby said. “We actually talked to the scorekeepers at one point between periods. I think they did it correctly.”

River Lakes, the section’s No. 8 seed, led 2-0 after the first period. After a scoreless second, Adam Hayes scored three unanswered goals for No. 9 Becker/Big Lake as it took a 3-2 lead. 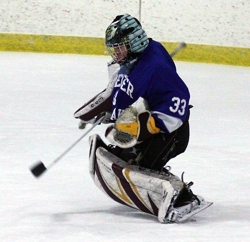 Becker/Big Lake's Alex Darsow is used to facing a lot of rubber -- he faced 50 or more shots seven times this season. Photo by Jane Johanns

With Darsow stopping everything thrown his way and the Eagles seemingly on their way to a most improbable victory, River Lakes tied it with 1:52 left in regulation on a shot by Austin Athmann. The puck was headed wide of the net before deflecting off the skate of Eagles’ senior Dylan Harlicker.

“It went off his skate and right into the net,” Darsow said. “He just looked at me and said … well, you can imagine what he said.”

River Lakes’ Mitch Ejnik ended the marathon battle 5:14 into the third overtime when he corralled a loose puck and scored from close range. A pileup at the side of the net trapped Darsow and didn’t allow him to get in position for Ejnik’s shot.

“It kind of came out front after (Darsow) got tangled up with some guys,” Samuelson said. “If he was in the net, I know he would have stopped it.”

The game lasted 81 minutes, 14 seconds of elapsed time. Last season, in the state Class 2A semifinals, Minnetonka beat Hill-Murray in a four-overtime game that lasted 86:31.

Becker/Big Lake assistant coach Brian Fritch said that, during a timeout late in the third period, Darsow skated over and told him, “I don’t know why they keep shooting, it is not going to go in.”

Darsow said the comment wasn’t mean to come off as cocky.

“I’ve been on the team since the eighth grade, and we had lost so many times to (River Lakes) in the playoffs,” he said. “I felt like I owed it to the seniors to give it my all.”

“Every time we play someone, even though we lose, even though it might be eight or nine or 10 to zero, we always hear comments about Alex and how well he played,” Samuelson said. “You couldn’t ask for a better kid, either.

"I ask myself every day what we would do without him.”