Hornets, two power play goals prove to be too much for tough Prior Lake 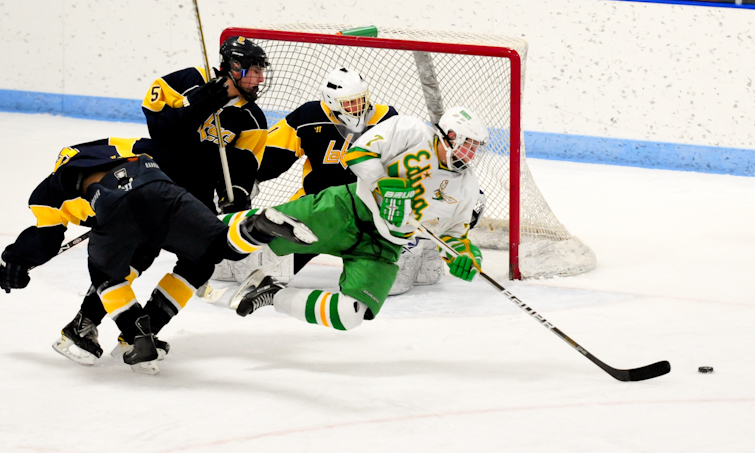 It was all Edina in the Section 2AA semifinal game against Prior Lake on Saturday, Feb. 26, as the Hornets handled the Lakers, 5-0.

“These are great games,” Edina senior forward Jake Sampson said. “The arenas are packed and we look forward to them every year. We came out strong today.” 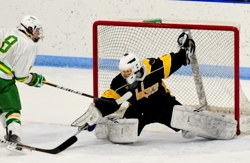 Sampson in particular played strong scoring two goals, the first coming after heavy traffic in front of the Prior Lake goal and after a few failed attempts.

“I saw five-hole so I shot it there after whiffing three times and it going of three other defensemen,” Sampson said. “Luckily it went in.”

Occasionally it’s better to be lucky rather than be good.

Sampson added his second goal on a power play opportunity 1:23 later after his first score.

Christian Dietzler, Nick Leer and Michael Sit also scored goals for Edina. Sit scored the lone goal in the second period on a snipe as his quick wrist shot found the top shelf on the power play.

Edina knew that the game would not be one were they could sit back and relax.

“We knew they were going to be an extremely tough team,” Edina coach Curt Giles said. “We watched them play before – we watched them against Holy Angels so we knew they were going to be tough. They’re a very, very good hockey team. They’re a big, strong hockey team and they have an excellent goaltender. We knew we’d have to play well to get past them.”

From here on out, Edina knows they’ll have to continue to play well.

“Now every game is huge,” Edina senior defenseman Max Everson said. “Each game could be it if you don’t play well. You can’t take a shift off and everyone has to go 100 percent the whole time.”

A section championship game against Burnsville is the only thing that stands in the Hornets’ trek to the Xcel Energy Center and Edina’s fifth straight State Tournament appearance.

Similar to Prior Lake, the Blaze will not make things easy for Edina.

“The atmosphere is going to be unbelievable,” Everson said. “It always is at Mariucci.”

For now, Edina isn’t going to look any further than Mariucci and Burnsville.

“All I know is we have to play well,” Giles said. “You can get concerned about other teams but our main concern is our team. We just want to make sure our team is playing well, doing the right things and fundamentally playing the right game and then we take our chances from there.” 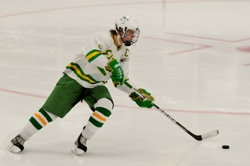 The packed Braemar crowd featured a familiar face, but one that was out of place – Edina senior defenseman and co-captain Max Everson.

“That sucked,” Everson said. It was such a good game and such a great atmosphere – those are ones you never want to miss.

Everson was forced to watch the game from the bleachers after sustaining a wrist injury during the Hornets’ 4-2 victory over Minnetonka on Feb. 10.

At the time, Everson’s season looked questionable. Next day surgery and welcome news that he could play again culminated during the Section 2AA semifinal matchup against Prior Lake as Everson returned to the starting lineup.

“It’s refreshing just because it’s so stressful watching from the stands,” Everson said. “It felt great to be out there. I was really happy I could come back and help the team win.”

The co-captain’s ice time was noticeably shorter than previous games and Everson wore a brace on his wrist but the Harvard-commit still managed to notch two assists in the 5-0 victory over Prior Lake.

Only one outburst of pain expression was apparent as Everson seemed comfortable back out on the ice.

“It started out in the second period and it was a little weak,” Everson said. “I was kind of second guessing myself on some stuff, a couple passes here and there, but as the game went on I was feeling better and I got more used to it. ”

Besides the obvious contributions on the score sheet, Everson’s return also brought several intangible boosts for the Hornets.

“It does a lot for us,” Edina coach Curt Giles said. “He’s a stable force back there, he handles puck extremely well, he’s a good player. Anytime you get a player like that back and continue playing I think it’s a great boost for us.”

The return was immediately noticed in the Edina locker room.

“He’s our captain, he’s our vocal leader,” Edina senior forward Jake Sampson said. “We had to have our other two captains step up and be vocal leaders and not just physical leaders. So it was a little different (when Everson was out) but it’s great to have Max back.”

Everson and Sampson are two of several talented Edina seniors that aren’t ready to be done playing hockey for the Hornets yet.

“All you want to do is keep continuing and play as long as you can.” 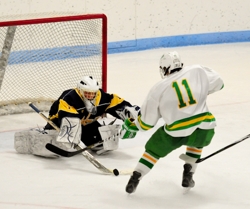 Prior Lake junior goaltender Kyle Miller gobbles up one of his 39 saves against Edina junior forward Lou Nanne (No. 11) during the Section 2AA semifinal game on Saturday, Feb. 26. Photo by Adam Crane

Not many people expected any upsets in the opening round of the Section 2AA playoffs – nobody except maybe Prior Lake.

Instead of facing No. 4 Holy Angels, top-seeded Edina took on No. 5 Prior Lake in the last Section 2AA semifinal game on Saturday, Feb. 26.

This time, however, there would be no upset for the Lakers as the Hornets won, 5-0.

“We knew we’d have our hands full today playing Edina but we’ve improved tremendously this year and coming into it we had some confidence that we could give them a game,” Prior Lake coach Joe Pankratz said. “Obviously they have a skilled team and we gave them everything we had.

“Our kids worked their rear-ends off.”

Despite physical play and solid goaltender, Prior Lake could not withstand excellent power play conversions by Edina.

“They scored two power play goals and that was the difference right there,” Pankratz said. “They’re good on the power play, they buried the puck. We didn’t have a ton of good looks at the net and we need to be a little opportunistic.”

Still, the appearance of Prior Lake in the semifinals was a positive in itself.

“For Prior Lake to get to the semifinals, knocking off Holy Angels in the quarterfinals – it was a good step for the program,” Pankratz said. “I’m looking forward to next year, a lot of guys coming back from this team and they’re good players.”

For Pankratz, the game against Holy Angels had a deeper meaning.

“It was an interesting game for me because Trebil was my peewee and bantams coach so that dynamic was kind of interesting,” Pankratz said. “We went into it confident.”

Pankratz attributes the upset victory over the Stars to impressive play at the end of the season.

“Second half of the season we played with everybody,” Pankratz said. “Looking at our schedule we played Apple Valley tight, Eagan and Lakeville South, we took Burnsville to overtime and beat (Bloomington Jefferson).

“ This game here obviously we haven’t seen Edina all year. It’s a little psychological for our guys a bit coming into semifinals – they’ve never been here before. So you have to get over that after the first few shifts but they worked hard. That’s what we wanted out of them and sometimes it doesn’t end up where you want it to end up on the scoreboard.”

Although Prior Lake didn’t leave Bloomington Ice Garden with a trip to the section championship game at Mariucci Arena, Pankratz is hoping the Lakers get used to semifinal appearances.

“It’s huge for our program,” Pankratz said. “Years past, Prior Lake was a door mat. Quarterfinals were those eight, nine, 10 to nothing games. Our program from the high school down to the youth in the last four years has made huge strides. We have great youth teams and the high school team just keeps improving and getting better. We have a lot of good people in place, a lot of good coaches in place out in Prior Lake. We’ve got a much bigger student section which was non-existent before. We probably had 200 students come to this game and tons of our youth players were here.

“Going into next year, we’re really looking forward to next season.” 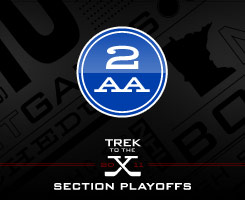 Prior Lake at Edina

Jake Sampson scored twice and Connor Girard made 25 saves as Edina defeated Prior Lake, 5-0, in the Section 2AA Semifinals from Bloomington Ice Garden.

Nick Leer, Christian Dietzler and Michael Sit netted the three other goals for the Hornets.

Senior defenseman Max Everson registered two assists in his return to the Edina starting lineup after missing four games with a wrist injury sustained during the Feb. 10, game against Minnetonka.

Prior Lake junior goaltender Kyle Miller made 39 saves in the loss as the Lakers end the season 9-14-4.

Up next for Edina is the Section 2AA championship game on Wednesday, March 2, at Mariucci Arena against Burnsville at 6 p.m. 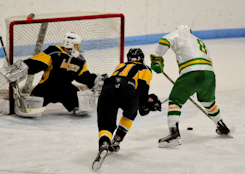 1. Jake Sampson, Edina
The senior forward scored two goals in a 1:23-span during the third period. Sampson's first goal came after several swings which echoed his determination during the game.

2. Connor Girard, Edina
Making his third shutout of the season, Girard made 25 saves for the Hornets. The senior forward faced an increase of shots during the final two periods but maintained poise and confidence.

3. Max Everson, Edina
Following the Feb. 10, game against Minnetonka, the Edina locker room looked defeated even though the Hornets had just snapped the Skippers' home winning streak. Why? They watched Everson leave the ice in the final seconds with a wrist injury. The Hornets co-captain made his return after missing four games which was felt on both ends of the ice as Everson played solid defense and registered two assists. 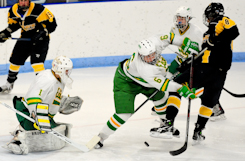 Edina senior goaltender Connor Girard (left) keeps his eyes on the puck through traffic in front of the Hornets' net during the Section 2AA semifinal game on Saturday, Feb. 26. Photo by Adam Crane