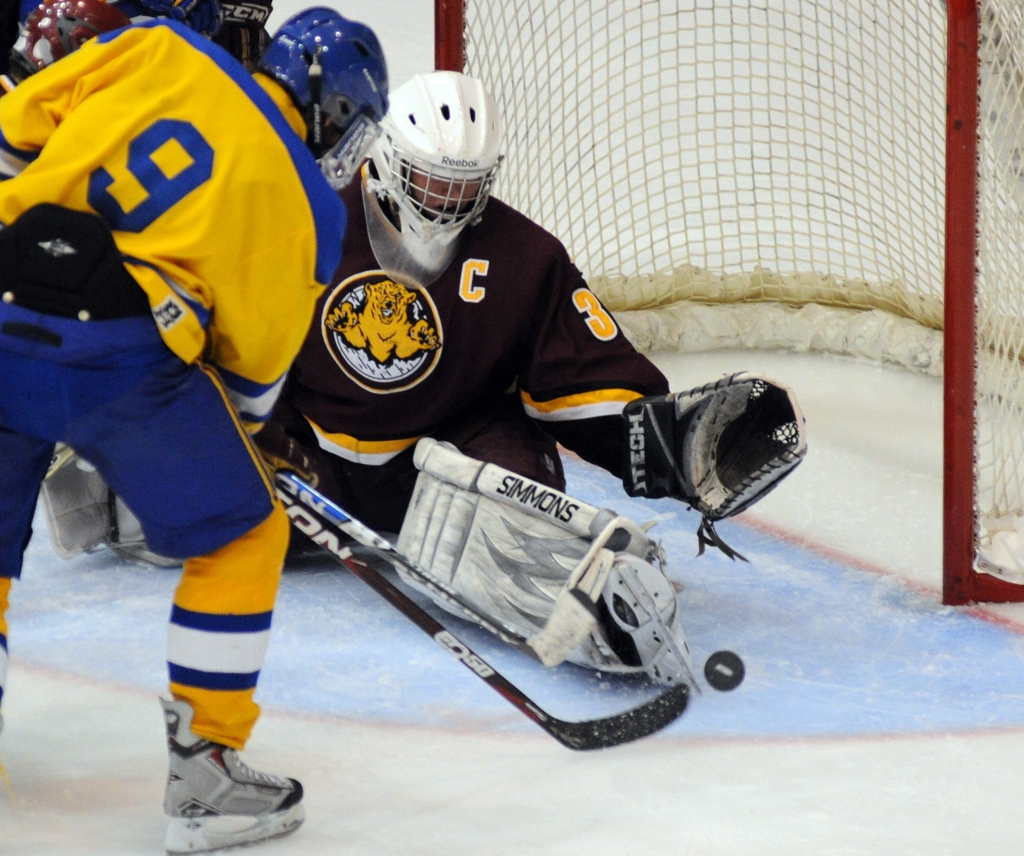 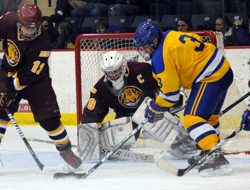 Matt Audette (3) looks for an opening against Lake of the Woods goaltender Alex Lyon (Photo by Tim Kolehmainen).

Doctors told the Thief River Falls senior that he had torn his anterior cruciate ligament (ACL), the bane of athletes worldwide. He would miss the entire football season – and his senior hockey season was also in jeopardy.

It was a big blow to one of the leaders of the Prowlers’ athletic success. A four-year varsity regular for the hockey team, he played in virtually every situation – power plays, shorthanded and even strength.

“He’s one of those glue guys,” said Thief River Falls coach Tim Bergland. “When he’s on the ice, you feel very comfortable.”

As a 5-foot-10, 180-pound defenseman, Audette was the second leading returning scorer for the Prowlers after scoring nine goals and 25 points last winter. Despite the threat of missing the entire season, teammates named him a captain along with fellow senior Micah Ranum.

Then came the good news.

Doctors told Audette that if he worked hard, he might be able to return to the ice in January – less than six months after surgery. Nothing was guaranteed, but it was a possibility. Audette took it as a challenge.

“Once he said that, I just had my mind set that I was going to make January,” said Audette.

On January 11, Audette was cleared by doctors to return to practice with a heavy knee brace. Two days later, he was on the ice for the Prowlers’ 4-1 victory over Crookston.

“Right away it was a little nerve-wracking,” admitted Audette, who returned as a forward for the first few games.

He had an assist against Crookston, then exploded for three assists against East Grand Forks on Jan. 25 and a goal and an assist against Duluth Central on Jan. 28. Eventually, Audette moved back to the blue line and has been an anchor for the Prowlers in their playoff run.

In 13 games since returning injury, Audette has racked up a goal and 12 assists. None were bigger than his most recent, as he found teammate Andrew Lansing for a game-winning one-timer against Lake of the Woods in the Section 8A semifinal Monday night. The goal with 5.9 seconds left in the second period propelled the Prowlers into the final against Warroad.

“That was a big momentum changer,” Audette said.

Audette hasn’t experienced any swelling in the knee in recent weeks, something that has allowed him to get more comfortable on the ice. But it’s still a process getting comfortable with pressing it, admitted Bergland.

“I think he’s getting better and better,” Bergland said.

Taming the Lyon and Bears? 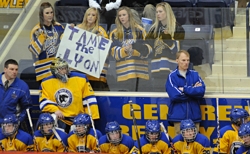 Thief River Falls fans remind their team of what the game plan was Monday night, "Tame the Lyon." (Photo by Tim Kolehmainen).

Nearly everyone in Ralph Engelstad Arena in Thief River Falls knew what the hometown Prowlers were facing in the Section 8A semifinal Monday night. And for those who didn’t, fans brought signs reminding them.

“Tame the Lyon.”
For two periods, the Lyon – Lake of the Woods senior goaltender Alex Lyon, that is – was running wild. Despite a shot chart loaded with more ink than the Sunday New York Times, the Prowlers were locked in a 1-1 tie with the third-seeded Bears.
As the second-seeded Prowlers pounded shot after shot on Lyon, they were greeted with that same message when they returned to the bench.
“Tame the Lyon.”
As the game aged, the Prowlers’ tension was obvious. After all, Lyon and the Bears had just shut them down 2-1 back on Feb. 1 – a game in which he had 29 saves. For a while, there was a distinct sense of déjà vu Monday night.
For Thief River Falls, the plan was simple against arguably the state’s best goaltender.
“Shoot, shoot, shoot,” said Prowlers’ coach Tim Bergland. “Traffic, tips and rebounds and all that stuff.”
But when Lyon is on his game – as he was Monday night – nothing comes easy.
"He’s tough to beat on that first shot, especially when he sees it,” continued Bergland. “(So we had) to get traffic and get in his way. It’s tough to stop the puck when he can’t see it, but he does cover a lot of net.”
Finally, with just 5.9 seconds left in the second period, the Prowlers’ Matt Audette corralled the puck in the corner and found defenseman Andrew Lansing streaking down the slot. Lansing's one-timer beat Lyon clean and gave the Prowlers a 2-1 lead.
Relief flooded through the Prowlers.
Audette pumped his fists as if the game were in its final seconds, not with a full period to play. As the horn sounded intermission, the Prowlers swarmed goaltender Jon Narverud. They were just one period away from meeting Warroad in the Section 8A final Thursday night.
The Prowlers protected the lead by controlling the puck, outshooting Lake of the Woods 18-2 in the final 17 minutes. Over the final two periods, Thief River Falls outshot the Bears by a 35-5 margin. The Prowlers got a short-handed insurance goal from Evan Ose five minutes into the third, then Lyon shut the door again, making 44 saves on the night.
But it was enough.
The Lyon may not have been tamed, but the Prowlers escaped. 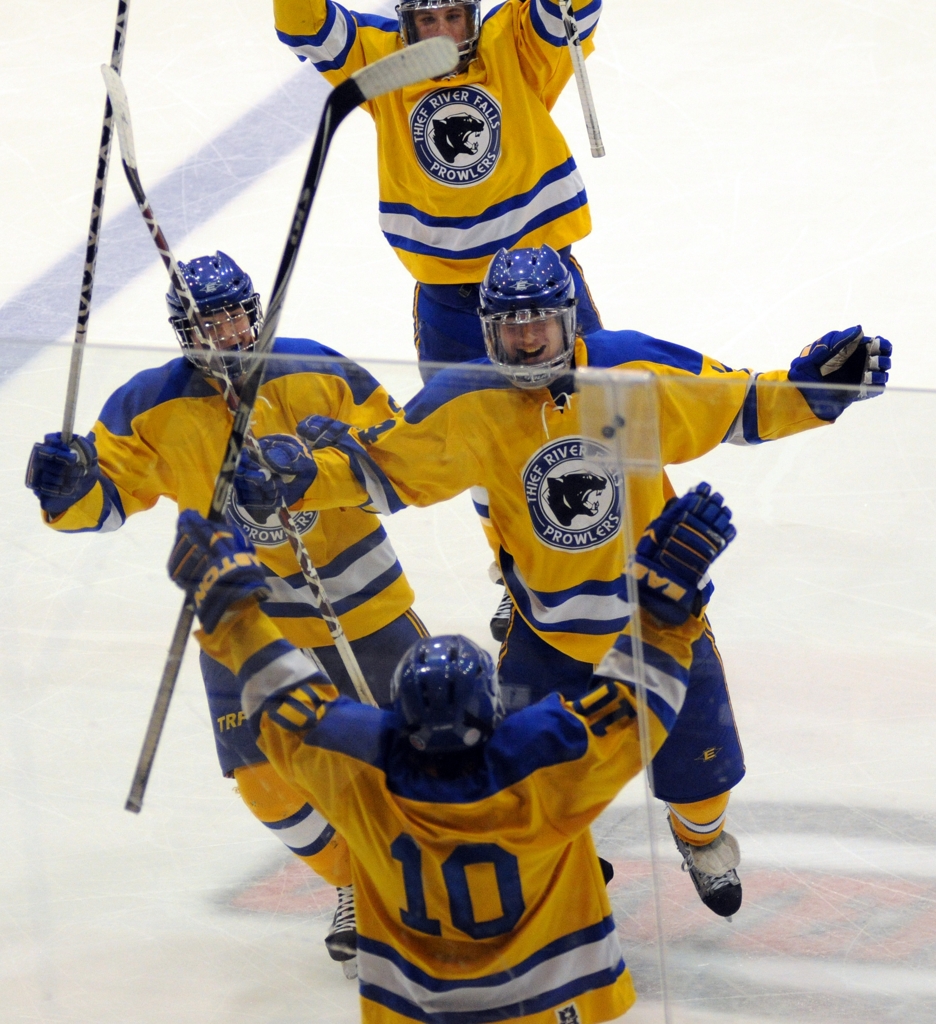 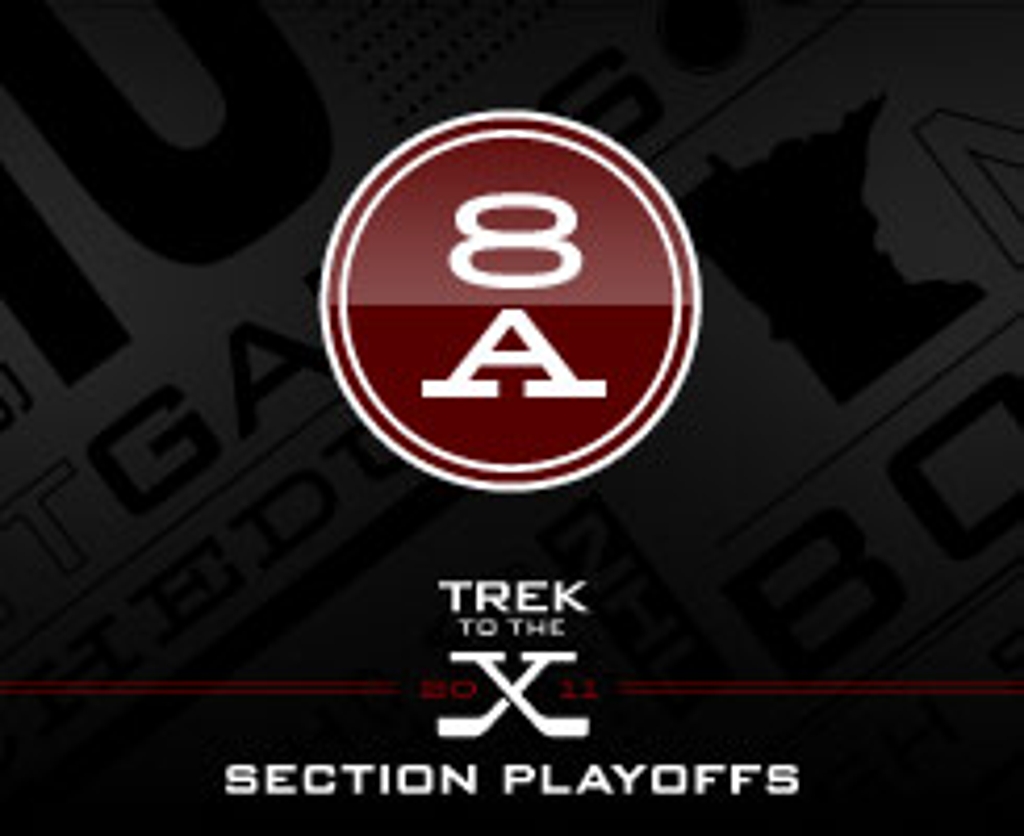 Lake of the Woods vs. Thief River Falls 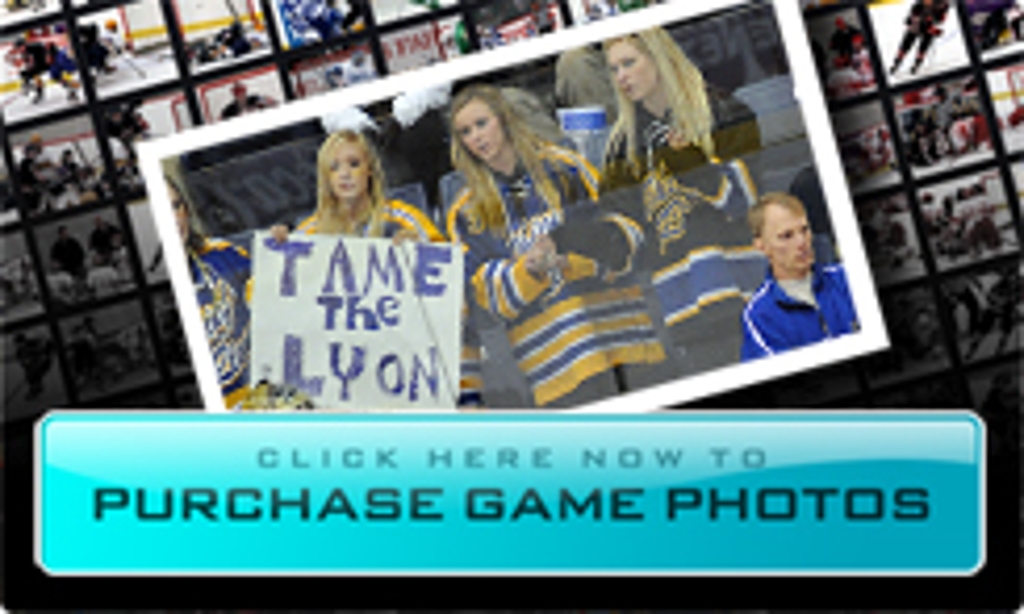 Andrew Lansing scored with 5.9 seconds left in the second period to send No. 2 Thief River Falls into the Section 8A final. Powered by Lansing's late tally, the Prowlers (18-8-1) edged No. 3 Lake of the Woods (17-7-3), 3-1 in Monday night's semifinal at Ralph Engelstad Arena in Thief River Falls.

The Prowlers dominated the shot charts, ripping 47 at Lake of the Woods goaltender Alex Lyon, one of the two finalists for the Frank Brimsek Award, recognizing the top senior goaltender in the state. But Lyon stood tall all night long, making 44 saves.

Travis Mollberg gave the Bears an early 1-0 lead, scoring 24 seconds into a power play midway through the first. But Thief River Falls answered right back on Chris Forney's power play goal. Forney crossed the blue line and rifled a high shot past Lyon to tie the score at 1-1 after one.

That score held until Lansing's goal in the final seconds of the second.

Evan Ose gave the Prowlers a shorthanded insurance goal 5:23 into the second period.

The Prowlers will play No. 1 Warroad in the Section 8A final Thursday night at Ralph Engelstad Arena in Thief River Falls. 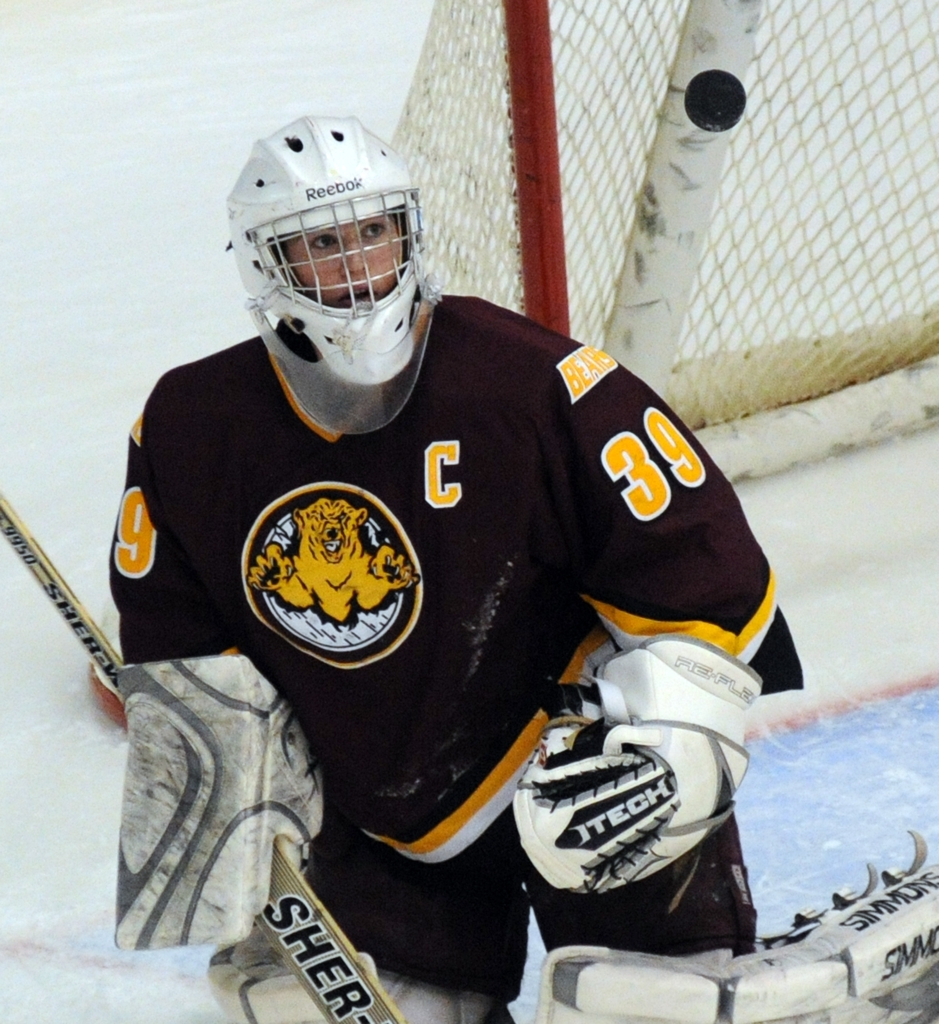 Alex Lyon of Lake of the Woods

1. Andrew Lansing, Thief River Falls
The junior defensemen saved his team a nervous second intermission when he scored the go-ahead goal with 5.9 seconds left in the period. Despite outshooting Lake of the Woods heavily, the game was tied at 1-1 until Lansing's goal -- this after the Bears beat the Prowlers 2-1 back on Feb. 1.

2. Alex Lyon, Lake of the Woods
As he was in most games this year, Lyon was the best player on the the ice for the Bears. He stopped 44 of 47 shots and kept his team in the game until the end. The Frank Brimsek Award finalist ended his high school career on the bench for the final minute, but was clearly one of the top three stars.

3. Chris Forney, Thief River Falls
Forney scored the Prowlers' first goal, a rocket over the shoulder of Lyon late in the first period that tied the score at 1-1. On the power play, the sophomore crossed the blue line, wound up and let 'er rip.

Tag(s): Home  Thief River Falls  Lake of the Woods  Trek to the X  Section 8A