Cadets cruise to Section 4A finals

For two consecutive seasons, St. Thomas Academy lost to Mahtomedi in the Section 4A finals.

Each time, the Cadets were heavily favored to advance to the state Class 1A tournament.

The two Classic Suburban Conference rivals met again on Tuesday, March 1. This time in the semifinals and this time it was the Cadets, ranked No. 1 in the state in Class 1A for most of the season, who sent the Zephyrs packing with a 4-0 win on Tuesday, March 1, at Aldrich Arena in Maplewood.

“It’s been a tough two years,” Cadets coach Tom Vannelli said. “To get the win and a shutout is pretty rewarding.”

It took only 45 seconds for the Cadets (21-6-0) to score first and establish that they weren't at all interested watching the Zephyrs (13-13-1) engineer a third upset.

“We came into this came knowing we were not going to get beat by these guys for a third year in a row,” Cadets forward Zach Schroeder said. “We were pumped about the game and wanted to pound them.”

Senior Matt Kroska kick-started the convincing win when he swatted a loose puck in front of the Zephyrs net that got past goalie Sawyer Marshall for an early 1-0 lead.

Another strong start for the Cadets, who raced to early leads in the teams' previous regular season meetings this year, allowed them to play to put constant pressure on Mahtomedi.

“Getting a goal early and being able to knock off a team that has haunted us the last two years feels pretty good,” Cadets senior forward A.J. Reid said. “When we got that goal, we set the pace and sent a message to them that they were not going to beat us again.”

Reid did his part in putting the Cadets one step closer to earning a state tournament berth. He assisted on Kroska’s goal to start the game and buried a wrist shot in the second period, adding some more insurance for a 3-0 lead.

After taking two penalties in the first period, Reid, had to find his groove while spending nearly a quarter of the period in the penalty box.

“I got a little frustrated, but getting that goal got me back,” Reid said. “It allowed me to get back into the game.”

When St. Thomas Academy got the lead, it stuck to a plan that was working from the start.

“You don’t want to let them back into the game,” Reid said. “They have some guys that can score, so going away from what we were doing and giving them some life would not have been good.”

“They’re a team that has won before, so if you can get up on them and not let them breathe, that is important,” Schroeder said. “We got on them early and stayed that way until the end of the game for the most part.”

Some of the seniors on the Cadets roster were part of the 2007-08 state championship team that went 26-5-0.

Reid said he remembers that title run well, Obviously, he wants to get there again.

“It was a lot of hard work and dedication to your team,” he said. “We want to be in that situation again because we have the team that is committed to winning.”

“South St. Paul and Totino are great teams and we played both of them,” Schroeder said. “Both are going to come at you hard, so we just can’t overlook them.”

St. Thomas Academy beat Totino-Grace 6-0 on Feb. 1. The Eagles only have one loss since, a 6-1 defeat to Benilde-St. Margaret’s.

There is a lot of responsibility that comes with being a goalie for one of the state’s strongest boys hockey programs.

David Zevnik, only a sophomore, has handled his part well in his first varsity season.

He has recorded six shutouts, two in the section playoffs, and one of those was earlier in the season against Totino-Grace, the team STA plays in the Section 4A finals.

“I’m proud of the way he has played the last two games,” Vannelli said. “Only a sophomore and look at the way he has handled himself. Couldn’t ask for more than that.”

Zevnik finished with 26 saves, so not a huge number, but was on top of his game, which has become something the Cadets are seeing on a regular basis now.

“He has been doing this all year,” Reid said. “We count on him to do a lot for us and he has been playing well.”

Not being on the state championship teams and cognitive to what has happened to STA the past two seasons, Zevnik said he understands the importance of winning.

“You see it in the seniors faces,” he said. “They know what it takes to win and have seen the tough parts of losing. You just want to play your best and let those guys know you are there for him.”

The way Zevnik has played, his teammates know his best interests are for the team.

“He has played well for us and wants us to win,” Schroeder said. “As a sophomore, he has come in and shutout two teams in sections in his first playoff games ever and still wants more for us.”

Being the goaltender that put an end to a two-year drought to a conference foe will even catch the attention of the opposing coach.

“We had our chances against them, but just couldn’t convert,” Zephyrs coach Jeff Poeschl said. “They have good defense and a pretty good goalie over there.” 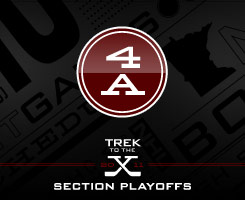 Senior A.J. Reid had a goal and an assist to lead St. Thomas Academy past Mahtomedi 4-0 in the Section 4A semifinals on Tuesday, March 1, at Aldrich Arena in Maplewood.

The Zephyrs had defeated the Cadets in the section title game each of the previous two seaons.

The top-seeded Cadets scored just 45 seconds into the game when Matt Kroska put home a shot in front of the net, where he picked up a loose puck.

Late in the first, Matt Raiola's slapshot got through the five-hole of Zephyrs goalie Sawyer Marshall to give St. Thomas Acadamey a 2-0 lead heading into the locker room.

The Cadets killed the second of two Reid penalties and the senior made up for it, putting home a wrist shot in the slot for a 3-0 lead.

Even with a lead, St. Thomas Academy did not let up in the third,

The Cadets had three power plays in the final period in large part because they played aggressive and kept the puck in the Zephyrs' zone for a majority of the period.

Andrew Commers scored a power play goal late to make it 4-0 and essentially ice the game for St. Thomas Academy.

The victory completed a season sweep for the Cadets, who beat their Classic Suburban Conference rivals for the third time and did so in dominating fashion, putting 39 shots on goal.

St. Thomas Academy advances to the Section 4A final, where it will play No. 2 seed Totino-Grace at 7 p.m., Friday, March 4 at Aldrich Arena.

1. A.J. Reid, St. Thomas Academy
He made up for two early penalties in the first period by scoring an early second period goal to give STA a 3-0 lead. He also assisted on the game's first goal, which happened just 45 seconds in the game and set the tone for the Cadets.

2. David Zevnik, St. Thomas Academy
Only faced 26 shots on goal, but that may have been because he didn't give up any quality second chances. Zevnik is only a sophomore, but gets the praise of an upperclassman by his coaches and teammates. He will be tough to beat for any team that plays the Cadets on Friday in the Section 4A finals.

3. Zach Schroeder, St. Thomas Academy
Accounted for two assists and was a major factor on the power play for the Cadets. As the point man, he got off a lot of shots, set up his teammates and tired out the penalty killers of the Zephyrs, which were busy in the final period. Schroeder could have had a bigger night if he were able to bury some quality shots, but he was a reason why the Cadets advanced to the Section 4A finals and took down Mahtomedi, their conference rivals in the semi finals.