Jake Guentzel, Loren French each score twice as Hill-Murray takes over in third 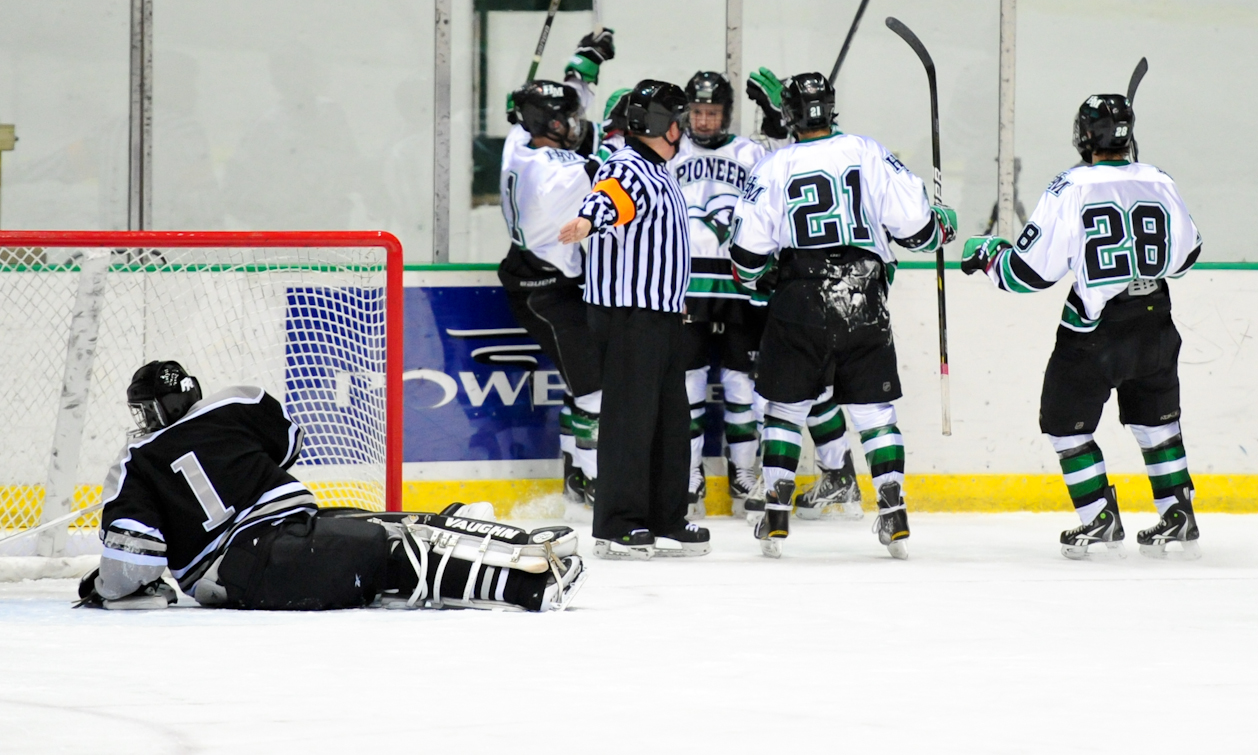 Hill-Murray celebrates a goal against Roseville in the Pioneers' 5-1 victory during the Section 4AA semifinal game on Wednesday, March 2. Photo by Adam Crane

Winning a section semifinal game may seem like a great feat.

For Hill-Murray, its 5-1 victory over Roseville on Wednesday, March 2, was strictly business.

Hill-Murray sophomore forward Zach LaValle (No. 21) tries to sneak a shot past Roseville goaltender Nick Lehr (No. 1) during the Section 4AA semifinal game on Wednesday, March 2. Photo by Adam Crane

“I thought we were going to come out better than that,” Hill-Murray sophomore forward Jake Guentzel said. “At first we struggled and we were getting kind of scared in the third cause we were just throwing the puck out of the zone. But in the third period we came out better.”

With a one-goal lead heading into the final period the Pioneers pumped in three "security" goals to seal the deal, sending Hill-Murray to the Section 4AA championship game.

Heading into the third period, Hill-Murray coach Bill Lechner reminded his team of the game plan.

“We call minutes: ‘miles,’ ” Lechner said. “So we had 17 miles left and if you want to reach to where you want to get to, Roseville is in your way.

“Basically treated it like a zero-zero game -- which it was close to being anyway. I think we responded better in the third period.”

The Pioneers’ seemed to agree it was a little too close for comfort in the third period.

“At the end we were kind getting more and more nervous because it was a close game and one bounce could make it go their way,” Guentzel said. “We battled and we got through it so that’s good.”

“It was a little closer than it needed to be but we pulled it out in the end and got some experience for the younger guys so it was good for us,” Hill-Murray senior forward Loren French said.

“The semis are a tough games sometimes,” Lechner said. “We told the kids that Roseville is a good team, they played hard, they laid it on the ice. I thought we played a little tentative at first but part of it was due to what Roseville was doing to us and we had to adjust and fight through it. We were fortunate enough to do that.

“We played kinda like ‘it just happens’ and we had to get back to ‘make it happen.’ I feel that we did that in the third period when we started taking control, forechecking properly, fighting through bodies, winning one-on-one battles and playing a little bit better hockey.”

With the semifinal victory under their belt, the Pioneers are looking ahead -- but not too far ahead.

“You kind of want to look towards state but we have to go game by game right now and see where it goes,” Guentzel said.

“The first game is usually easy because the Pioneers, respectfully, have had a high seed,” Lechner said. “The second game is your first real test of the playoffs and you’re going to get a team that’s always coming after you with all they’ve got.

“We’ll play better on Friday just because that’s the history of what happens around here.”

“I don’t think it really matters who we play, we gotta show up and play our game,” French said. “Our system doesn’t change. We just gotta make sure we’re going hard, 100 percent and we should be fine.” 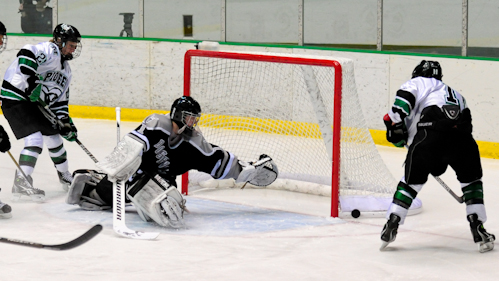 Roseville’s Jeff Pauletti had seen the upsets so far this postseason -- such as Section 6A No. 9 seed St. Cloud Apollo’s stunning victory over No. 1 seed Little Falls and Orono shocking top-seeded Blake in Section 2A.

“Anything can happen in the playoffs,” Pauletti said. “You just have to find one thing and get it to the net, backcheck well, take a shot, anything. It’s just like playing in overtime and you have to have an overtime mentality for 51 minutes.”

Though Roseville was not able to pull out an upset victory over the Pioneers, keeping the game close showed the fight in the Raiders.

“There weren’t many people that gave us a chance and that’s fine,” Pauletti said. “But we believed all year we could do this. Eleven of our 26 games -- up until today -- were one goal games or less and we played good competition. We played Burnsville, Wayzata, Lakeville South, those kind of teams and we were in close games with all of them. I expected what I saw.”

Leading the way for the Raiders was excellent play by senior goaltender Nick Lehr who made 38 saves.

“Nick (Mehr) has played great all year,” Pauletti said. “We’ve been fortunate to have two very good goaltenders in our program (Mehr and Brian Comiskey). Playing good defensively for our team starts in the back and those guys have been exceptional for us this year.”

Roseville finishes the season with a 13-9-5 record, dramatically improving from last year’s record of 7-18-1.

“I’m proud of them for their effort,” Pauletti said of his team. “It’s a group that works their butt off and we did all year. Our goal was to play great defensively and we did. It’s also the best bunch of guys I’ve been associated with as a group – 20 guys – that I’ve ever coached.” 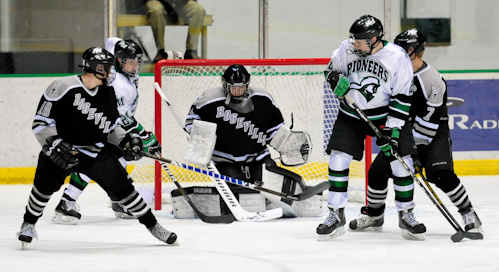 Roseville goaltender Nick Lehr makes one of his 38 saves during the Section 4Aa semifinal against Hill-Murray on Wednesday, March 2. Photo by Adam Crane 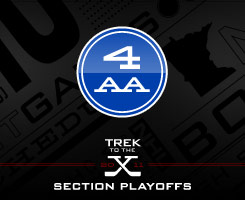 Jake Guentzel and Loren French had two goals each for Hill-Murray as the Pioneers advanced to the Section 4AA finals with a 5-1 win over Roseville in the Section 4AA semifinals on March 2, at the State Fairgrounds Coliseum.

Roseville kept the game close and was down 2-1 heading into the third, but Hill-Murray scored three goals in the final period to pull away.

Senior goaltender Nick Lehr made 38 saves for Roseville and was one of the factors early on in keeping the Raiders in the game.

Guentzel scored the first goal of the game on the power play, putting away a shot right by the Raiders' net.

Less than a minute later Robb Stautz tied the game when he pounced on a loose puck in front of the Pioneers net and beat Hill-Murray netminder Tim Shaughnessy.

Late in the first, Luke Voltin scored the eventual game-winner, slipping a shot by Lehr off the faceoff for a 2-1 lead heading into the second.

After a scoreless second period Guentzel got his second goal, tapping in a loose puck by the Roseville crease to stretch the Pioneers' lead to two.

French scored his first from the slot, scoring on a one-timer. He would add an empty net goal with 54 seconds to close out the game.

Roseville finishes the season with a 13-9-5 record.

Hill-Murray improves its record to 23-3-1 and will play in the Section 4AA finals 9 p.m., Friday, March 4, at the State Fairgrounds Coliseum against the winner of the Stillwater/White Bear Lake game.

Check back later for more coverage -- including pictures -- of this game. 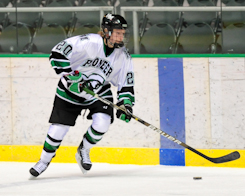 1. Jake Guentzel, Hill-Murray
The sophomore had two goals for the Pioneers, one being the first goal of the game. In the third, he gave Hill-Murray a two-goal lead with another tally right by the Raiders goal.

2. Loren French, Hill-Murray
Another Pioneer forward with two goals, both in the third period, which was big for Hill-Murray, which only led 2-1 heading into the final period. French buried a one-timer to extend the Pioneers lead to 4-1. He later tallied an empty netter.

3. Nick Lehr, Roseville
Lehr kept the Raiders in the game, stopping 38 shots. He was busy all night long as the Pioneers were at least consistent in their offensive attack. He was well positioned all game and handled the pressure Hill-Murray applied with composure that all goalies need in big games. 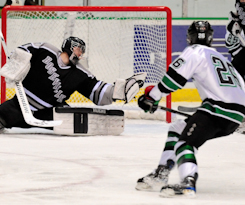