Prowlers break through, party on 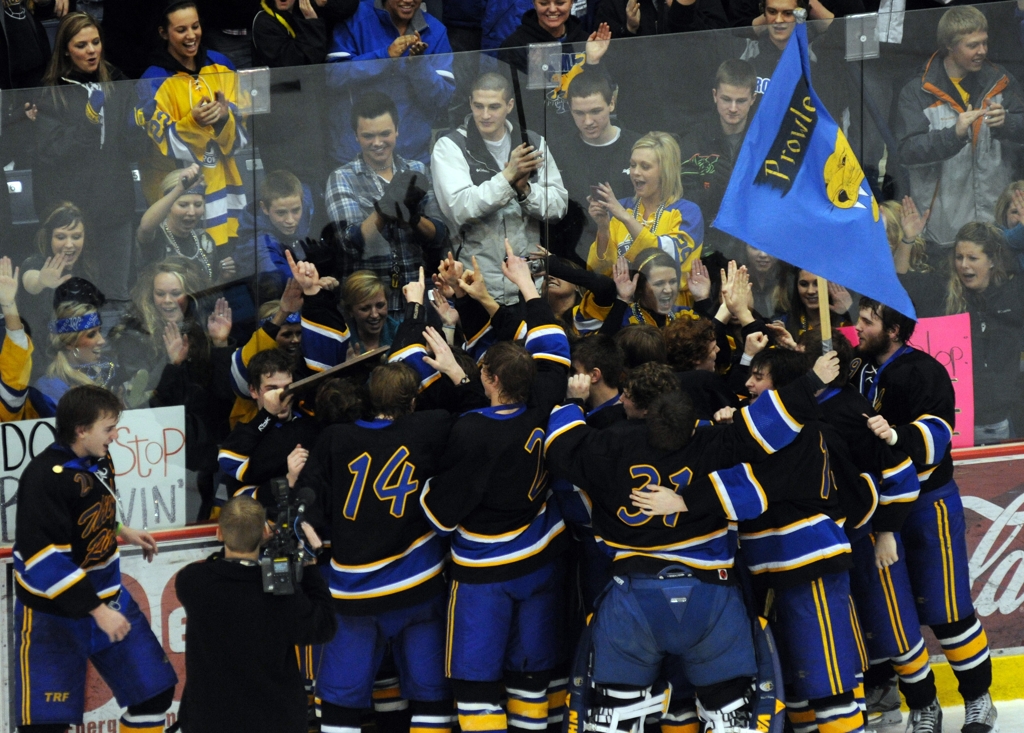 Thief River Falls players and fans joyfully celebrated the team's Section 8A championship -- and return to the state tournament (Photo by Tim Kolehmainen). 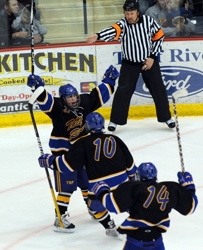 If there hadn’t been school the next morning, the celebration might have gone on all night.

After breaking a decade-long submission hold by Warroad in the Section 8A final Thursday night at Ralph Engelstad Arena, Thief River Falls was in a mood to party.

The Prowlers were going back to state.
“The whole town was here,” marveled senior Micah Ranum, who scored the eventual game-winner early in the second period of a 4-1 victory. “But if they couldn’t make it, they were listening to it (on the radio).”
Attendance numbers weren’t available, but there didn’t appear an empty seat in the house at the puck drop.
Standing room only was the norm. Fans lined the concourse around the lower bowl, some clad in yellow Prowlers jerseys, some with spiked blue wigs and flashing LED sunglasses, some dressed a bit more conservatively.
Officially, the Prowlers were the road team and wore their road blacks, but with the game on their home rink, most of the cheers were for the hometown team.
The volume cranked up even higher as the Prowlers got on the board just 47 seconds into the game when Riley Soderstrom popped in a rebound. The cheers carried on all night, as Thief River Falls led the whole way.
As the final seconds counted down, fans stood and saluted the team with a wave of whatever blue and gold object they could find. They remained in their seats throughout the medal ceremony and lingered long into the night, cheering the players and coaches as they individually walked through the concourse.
Coach Tim Bergland, a former Prowlers’ star and NHL veteran who returned home to coach his alma mater, soaked up the atmosphere in the ‘Little Ralph.’
“You just sit and look around the rink,” said Bergland, noting the number of longtime supporters and former players in the stands. “You look at your family, you look at your kids, you look at the people that have been around the program for years and years.”
It’s difficult to fault Prowlers’ fans, past and current players, coaches, administrators and anyone with a Thief River Falls connection of their glee. Aside from one brief shining moment in 2006, the Warriors have dominated the playoff rivalry for the past decade.
The two northwestern Minnesota combatants have met in the Section 8A tournament 10 years in a row, seven of those times in the final, including Thursday night. Heading into the latest meeting, Warroad had the definite edge, claiming eight of the first nine meetings. Thief River Falls’ only victory in that stretch was a four-overtime classic in the 2006 final, 3-2.
“Seniors on the team have lost three straight years to them and we weren’t going to give our last year up,” said Ranum.
Thursday’s victory for Thief River Falls was practically a blow out in terms of the playoff history between the two programs. That three-goal edge equaled the largest in the decade-year rivalry (Warroad 4, Thief River Falls 1 in the 2005 final) and also the highest goal total by any winning team. The average score of the 10 meetings doesn’t even equal four total goals (Warroad 2.4, Thief River Falls 1.1).
It wasn’t just the fans who soaked up the night.
Players prowled around the ice, each taking a turn kissing the section trophy. They took a few victory laps, then retired to the locker room to continue the celebration. But a few minutes later, the Prowlers popped back out on the ice to continue saluting the remaining fans.
No one wanted the night to end.
“It’s one of those things that they’ll remember for the rest of their lives,” said Bergland.
“But we hope to make it a habit.” 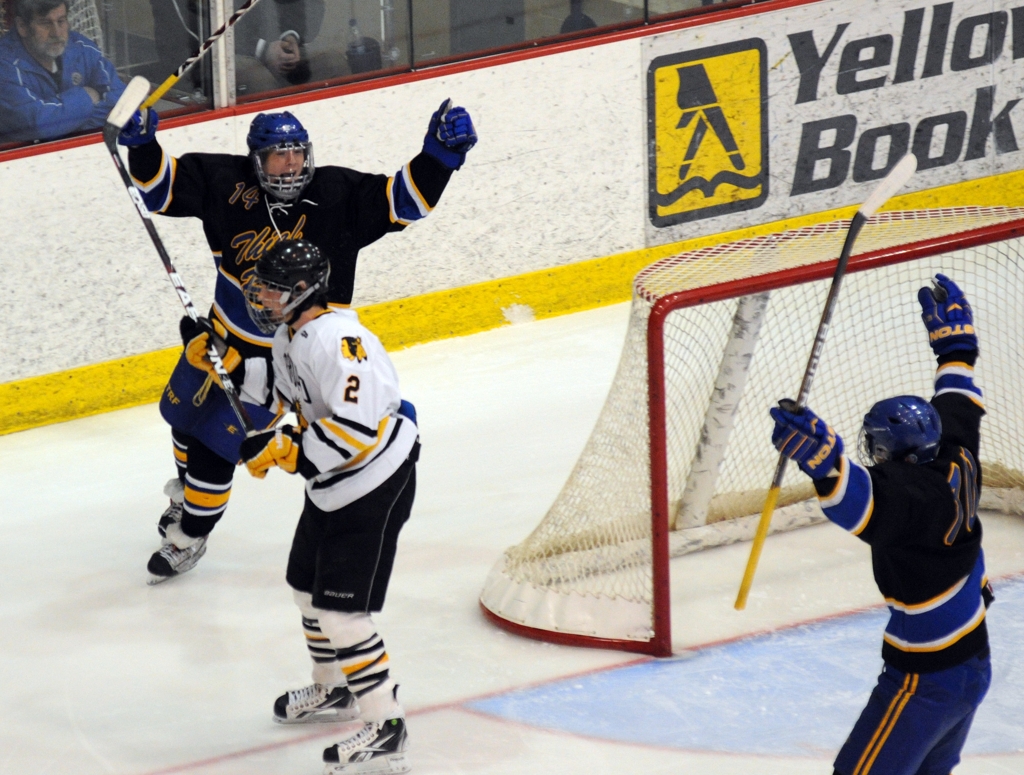 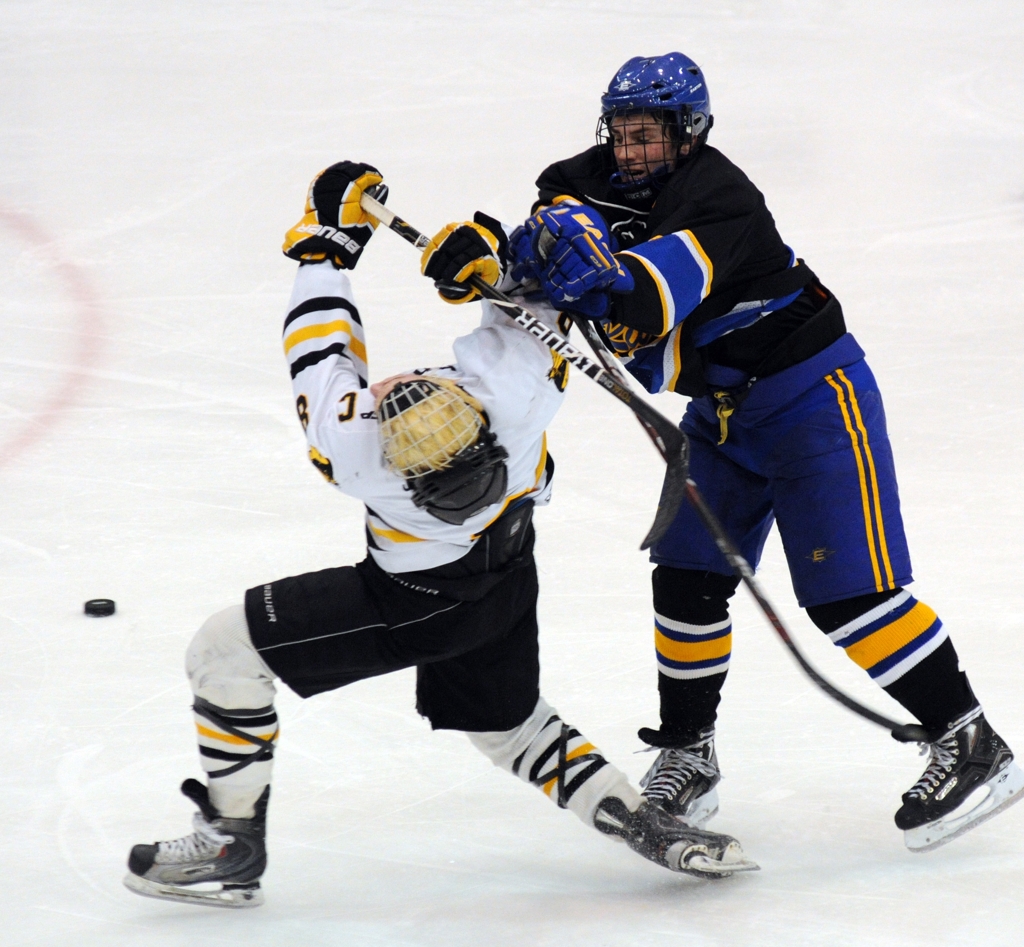 Thief River Falls' Matt Audette (3) got a penalty for head contact for this shot to Warroad's David Nelson (Photo by Tim Kolehmainen). 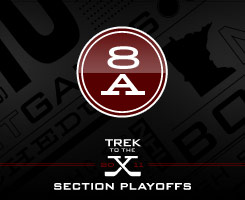 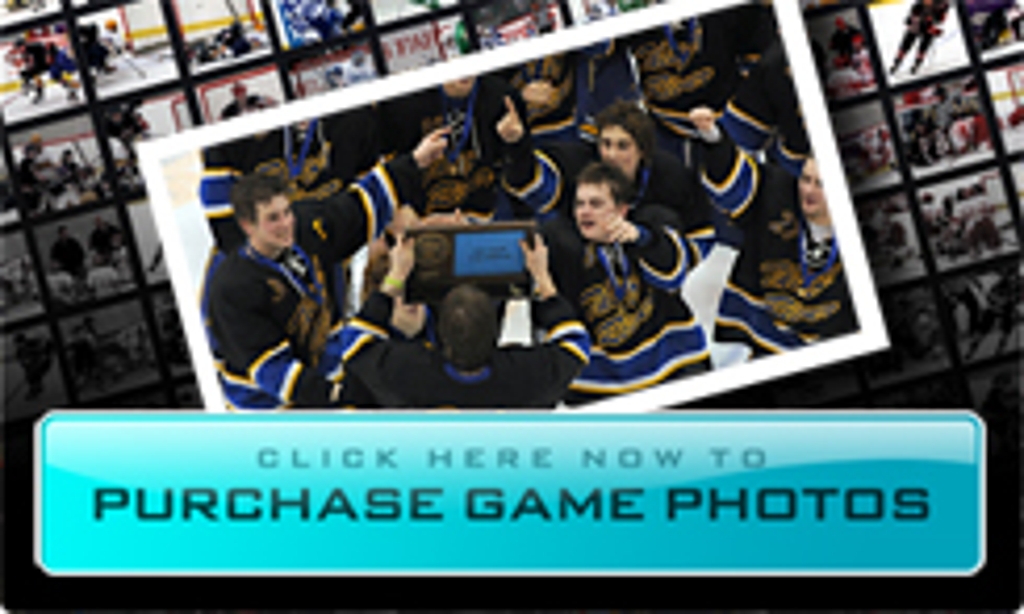 Wearing the road blacks on its own home rink, second-seeded Thief River Falls never trailed in beating top-seeded Warroad, 4-1, in the Section 8A final at Ralph Engelstad Arena Thursday night. Riley Soderstrom scored 47 seconds into the game on a rebound and the Prowlers (19-8-1) led the whole way.

David Nelson scored early in the third period to cut the Prowlers' lead to 2-1 and the Warriors (19-9-0) put on plenty of pressure in the ensuing minutes, but Jon Narverud held them at bay. The Thief River Falls junior goaltender made 18 saves on 19 shots.

Micah Rarnum netted the game-winner three minutes into the second period, a goal that gave the the Prowlers a 2-0 lead. Connor Doherty and Brady Meunier also scored for Thief River Falls.

Andy Foster made 20 saves on 23 shots for the Warriors.

1. Riley Soderstrom, Thief River Falls
Soderstrom treated the full house, pro-Prowlers' crowd to a goal just 47 seconds into the game. The junior forward corraled a rebound and fired it into the Warroad net to give Thief River Falls an early lead they did not relinquish.

2. Ryan Crosson, Thief River Falls
The senior was a playmaker all over the ice, setting up numerous scoring chances with his pinpoint passing and toughness along the boards. He netted just one assist, but could have had many more. His physical play also countered Warroad's hard-hitting.

3. Connor Doherty, Thief River Falls
Doherty was the right player in the right place at the right time. With Warroad cutting the Prowlers' lead to 2-1 and buzzing for more, Doherty found a loose puck on his stick and fired it home to regain a two-goal lead in the third.  Warroad's moment was stopped and the Prowlers weren't again threatened.