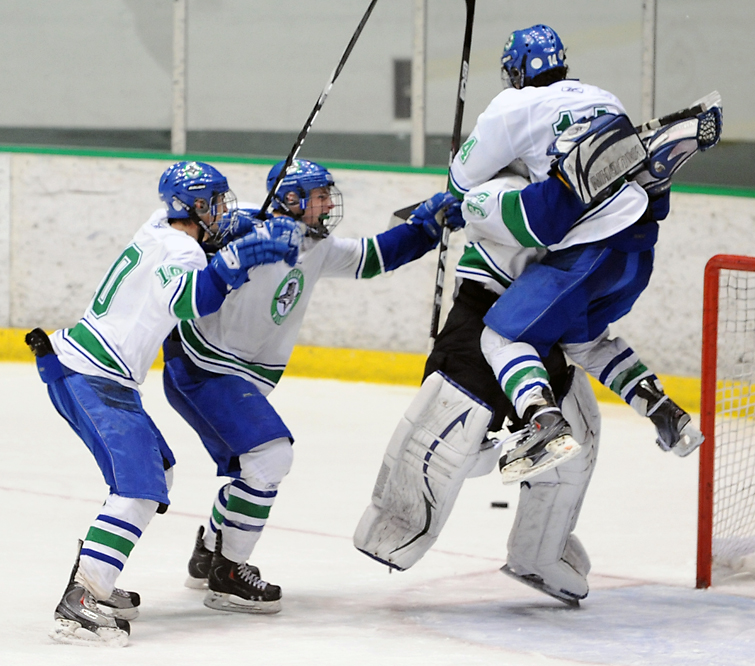 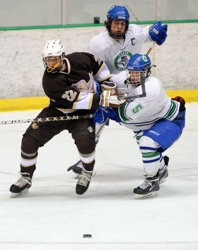 During grueling offseason workouts, they thought about Apple Valley.

Every weight room session, they thought about Apple Valley.

During an exceptionally long lung-burning, leg-numbing practice, they thought about Apple Valley.

Eagan lost to Apple Valley in overtime in the Section 3AA semifinals last season. Wildcats junior Michael Zajac said he had been thinking about a playoff rematch with the Eagles, “since the minute that game ended.”

“It was a big, big fuel source for us,” Zajac said after the top-seeded Wildcats beat the No. 2 Eagles 1-0 in the Section 3AA championship on Thursday, March 3, at the State Fairgrounds Coliseum in St. Paul.

Talk to the hard-nosed Zajac, and you get the impression he would have gnawed through his composite stick to beat Apple Valley. That wasn’t required, but Zajac was asked to play a defense-heavy role against the Eagles’ forward line centered by high-scoring sophomore Hudson Fasching.

“I don’t care if I get a point or if I get two points or three points, I just want the W,” said Zajac, who has scored a team-best 56 points (24 goals, 32 assists) in 28 games this season. “Especially if it means getting to the state tournament.” 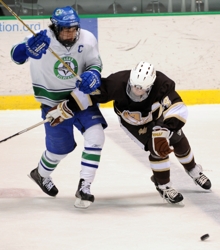 “Couldn’t breathe, really, at night, and I had the chills,” Zajac said. “It’s not good.”

Coincidentally, Apple Valley junior A.J. Michaelson, the Eagles’ top scorer and a University of Minnesota recruit, was vomiting Wednesday night while heading to Mariucci Arena in Minneapolis to watch the Section 2AA and 6AA title games.

“We didn’t know if he was going to play earlier in the day,” Hayes said. “We made the final call at about 4 o’clock. He definitely wanted to play.”

While the flu bug undoubtedly took some of the sting out of two of the game’s biggest offensive threats, it was Eagan’s defense-first mantra that set the tone. The game was scoreless through two-plus periods before Wildcats senior Kyle Bonstrom scored 5 minutes, 39 seconds into the third.

“We wanted to play defense first and the offense would take care of itself,” Eagan coach Mike Taylor said. “That’s what we kind of sold the kids on all week. We can’t get into run-and-gun with them. They have the horses to do that.”

Apple Valley loaded a forward line with Michaelson, Fasching and Michael Berens in the third period, and that unit did generate some quality chances. But Apple Valley was held without a shot in the final 3 minutes as it struggled to break the puck out of its zone.

The Eagles were unable to pull Gretz in favor of an extra skater until there were just 13 seconds remaining.

“The defense did a good job, they made my job easy,” said Wildcats senior goaltender Tommy Bodeker, who made 18 saves. 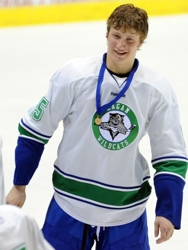 Eagan’s third line is called the Blue Line, a fitting color when you consider the blue collar job description: work hard, get pucks in deep and crash the net.

During the Section 3AA championship game on Thursday, March 3, at the State Fairgrounds Coliseum in St. Paul, Eagan’s Kyle Bonstrom, a skater on the third line, experienced the ultimate in job satisfaction. He scored the lone goal of Eagan’s 1-0 victory against Apple Valley.

With the victory, Eagan advances to the state tournament for the first time since 2006.

Bonstrom scored at 5:39 of the third period, sending the puck past Eagles’ goaltender Aaron Gretz with a backhand swipe. The play developed quickly as a puck bounced over the stick of an Eagles’ defenseman and into good position for Bonstrom to shoot.

“Any opportunity you get you want to put it in,” said Bonstrom, who has now scored two of his seven goals this season in the playoffs. “You have to capitalize.”

For half the game, neither team enjoyed good scoring chances. The second half of period two saw both teams quicken the pace and create more offense. Apple Valley defenseman Anthony Leong got a puck past Eagan goaltender Tommy Bodeker that hit the pipe.

“Both teams were playing so tight defensively,” Bonstrom said.

But as time began running out on Apple Valley’s chances of going to state for the second consecutive year, frustration mounted. Forward Trent Heuer returned to the bench late in the third period and smashed the butt end of his stick into the back wall of the bench.

With 10 seconds remaining, the jubilant players hopping in place on the Eagan bench told a different story. The Wildcats, upset in last season’s section semifinals by Apple Valley, made good on their No. 1 seed.

“I was very proud of the way our guys battled for 51 minutes,” Eagan coach Mike Taylor said. “After last year, they were on a mission.” 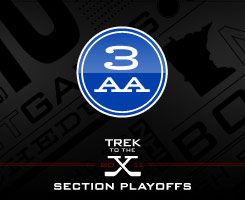 1. Kyle Bonstrom, Eagan
The senior third-line forward, who scored five goals during the regular season, notched his second of the playoffs when he alertly backhanded a bouncing puck into the goal in the third period. It was all the Wildcats needed to propel them to the state tournament for the first time since 2006.

2. Michael Zajac, Eagan
The Wildcats’ junior scoring star was assigned the task of shutting down Apple Valley sophomore standout Hudson Fasching, and Zajac responded with a superb defensive performance. He also had his moments in the offensive zone, firing several close-range shots on goal.

3. Aaron Gretz, Apple Valley
The Eagles’ senior goaltender was a rock, making 24 saves and making them look easy. Gretz was on his angles and smothering his rebounds, and he couldn’t be faulted on the goal that beat him, as it was the result of a funky bounce in the slot.