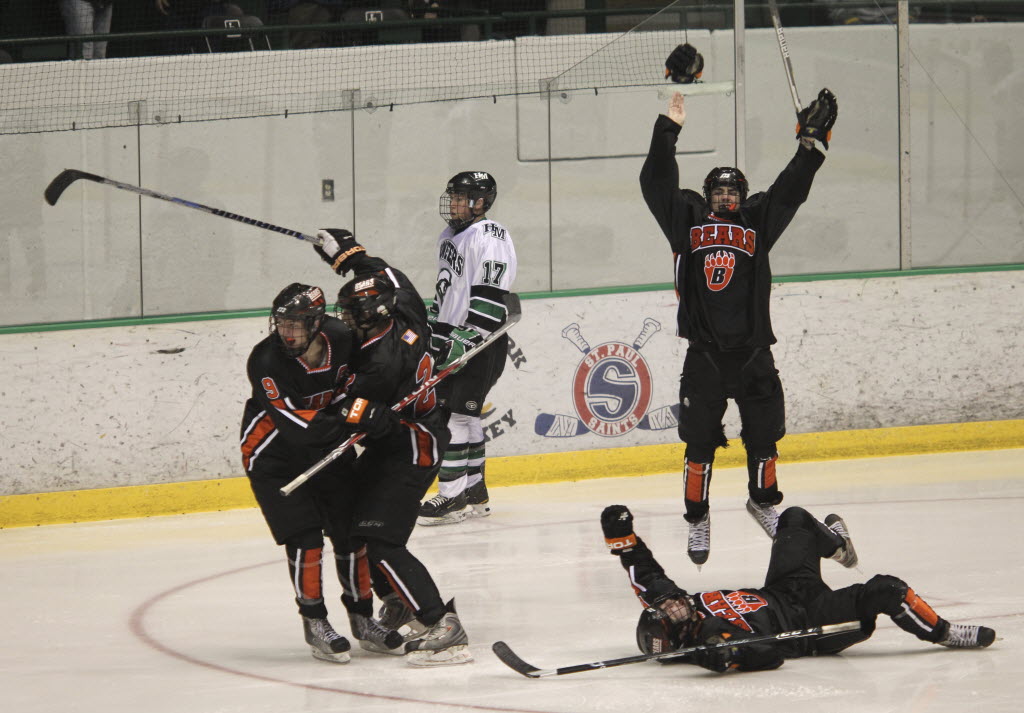 Editor's note: This is the fourth of four parts in an occasional series that   spanned the length of the Hill-Murray hockey team's season.

“Season’s over,” shouted a female White Bear Lake hockey fan, who viewed the open door to Hill-Murray’s locker room as an invitation to torment the Bears’ chief rivals.

The Pioneers were accustomed to having the last word, having beaten White Bear Lake 14 consecutive times — including every year in the playoffs from 2006 to 2010 — heading into Friday’s Section 4AA championship game at the State Fair Coliseum. This time, however, White Bear Lake prevailed 5-4 in double overtime, a dramatic reversal of fortunes against the state’s No. 1-ranked high school team.

Surrounded by 20 young men with battered bodies and wounded spirits, Pioneers coach Bill Lechner, his hands in his pockets, began to speak.

“Obviously, we’ve been pretty spoiled in games like this,” he said.

Just then, the throng of White Bear Lake fans standing outside the locker room began welcoming their conquering heroes off the ice. Lechner looked over his shoulder, then put his head down. Several minutes passed before the roar subsided and Lechner continued.

“We’re not built for moments like this,” he said.

One of those nine seniors, leading scorer Ben Bahe, began to cry — and not because he split his upper lip and chipped two teeth in Friday’s game.

“We’re all poor sports because we set the bar high,” Lechner said. “It’s a tough place to be, but it’s a great thing to strive for.”

After the Bears took a stunning 3-0 lead, Lechner felt guilt and pressure wash over him.

“I felt like I had to hold the school together,” Lechner said.

“It was like, ‘We have to win to keep enrollment up so that teachers have jobs.’ My wife tells me to knock it off, but it’s more than a game. It’s all the alumni, the trophy case. A lot of teams hope to get [to the state tournament]. We just expect it. And when we do it, it’s more relief than excitement.”

White Bear Lake held a 4-1 third-period lead before the Pioneers clawed back with three goals to force overtime.

They nearly won in the waning seconds of the first overtime, but Bahe just missed tapping the puck into a wide-open net. Despite the near miss, there was no time for doubt between overtime periods.

“We said back in November, ‘What’s it going to come down to? One goal,’” Lechner said.

Just 1 minute, 33 seconds into the second overtime, White Bear Lake scored and the Pioneers’ dream vanished. Hill-Murray players received their section medals attached to red ribbons — the color of second place. Lechner would later grab a medal out of the locker room trash can. He also tried to salvage life lessons from an unexpected defeat.

“Hopefully, you’ve built bonds with each other that will outweigh the trophy case,” Lechner said to his players.

Assistant coach Pat Schafhauser, a former Hill-Murray captain who was paralyzed from the waist down playing professional hockey in Europe, told players: “In time you’ll appreciate the journey. You’ll see that life is bigger than this.”

Lechner encouraged players to take the time they needed for changing clothes and regaining composure. Then he walked to the bathroom and quietly tore up his lineup card.

A season that had started with nerve-racking tryouts in November — one that saw so much individual growth and so many team-based accomplishments — was over. The aftermath is two-fold.

After the nine seniors, no group was more vital to the Pioneers’ success than the sophomore class. Forwards Jake Guentzel, Zach LaValle and Luke Voltin ended up on one of the top two lines. And Blake Heinrich paired with senior tri-captain Kevin Schulze on defense. But family dynamics and potential opportunities make it uncertain whether they will be Hill-Murray teammates as seniors.

Guentzel — whose father, Mike, is a former Gophers assistant coach now at Nebraska-Omaha — lives in a house that’s been for sale since this season began.

“I can’t honestly say Jake will or won’t graduate from Hill-Murray,” said Mike, whose older sons, Ryan and Gabe, graduated from Hill-Murray. “It’ll be a family decision and right now it’s month to month.”

And the climate of high school hockey has changed for top prospects. Junior programs and the U.S. National Team Development Program can draw players away early. Voltin and Heinrich both played at last summer’s Select 15 Development Camp. And Jake Guentzel ended the season on Hill-Murray’s top line.

“It’s unlikely that sophomore class will remain intact,” Mike Guentzel said. “Some people are loyal but some are opportunistic.”

The immediate post-mortem was emotional. Seniors such as Schulze, who forced overtime with his third-period goal, began taking off their jerseys for the last time. Loren French sat in a chair with his feet up against a post, holding his broken stick like a fishing pole. Tri-captain J.D. Cotroneo struggled to pull his sweat pants over the ice bag on his right leg.

Players left the locker room two or three at a time and were met with applause from parents and supporters. On his way out, Heinrich stopped to tell Schafhauser, “It was an honor to play for you this year, Coach.” The two hugged.

Several minutes later, Holler stopped with his left hand flat against the locker room door. After a few deep breaths, he pushed the door open and walked out with a green equipment bag and three hockey sticks on his shoulder.

Cotroneo was the last player out of the locker room, 22 minutes past midnight and into a new day.

The subject turned to Lechner’s sweater — green with horizontal white stripes and black trim to denote school colors — that he has long worn for luck in section final games. Friday’s loss not only ended a promising season, but it also became a good occasion for putting away symbols of past glory.

“The next time I wear this, it’ll be in my casket,” Lechner said. “That party is over.”

Previous stories in the series 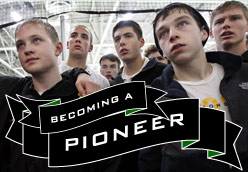 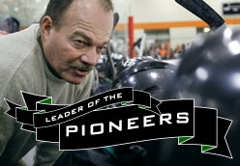 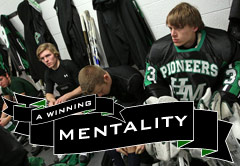