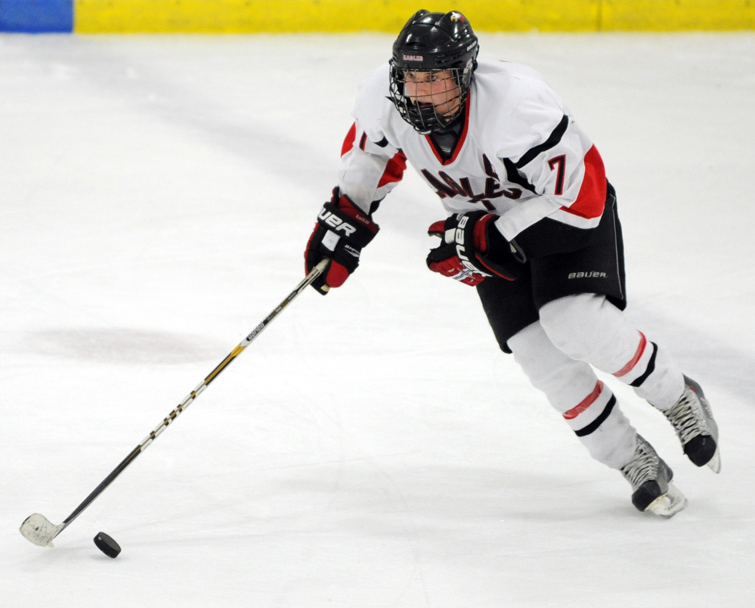 Kyle Rau doesn’t say a lot in the locker room.

Rau saves his breath for the game, where he approaches each shift with the sort of all-out effort you might see from a sprinter approaching the finish line. 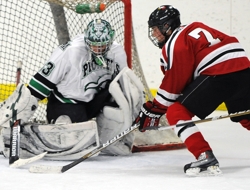 Eden Prairie's Kyle Rau scored one of his 36 goals this season in a 2-1 triumph over Hill-Murray. Photo by Helen Nelson

Most times, Rau returns to the bench doubled over, gasping for air. Just when you think the Eden Prairie senior center might be done for the night, he pops back over the boards and skates with abandon for another minute or so before again returning to the bench, spent.

A natural-born goal scorer, Rau has the rare ability to ratchet up his game when the pressure mounts. The third period of a tight game or, even better, overtime are the moments he enjoys most.
“I think he is 5-foot-8, but he hits more than anyone else,” Eagles senior defenseman Dan Molenaar said about Rau. “He is always battling in the corners. He’s doing the dirty things to get the job done.”
Rau, one of 10 finalists for the Mr. Hockey award and a University of Minnesota recruit, spared a few minutes before a late-season practice to talk to the Hockey Hub about growing up with a twin brother (Curt), dealing with opposing fans’ “cheers” and the number of moves he has stored in his breakaway database.

Kyle Rau One on One

Question: How is it that your twin brother, Curt, ended up being a defenseman and you a forward?
Answer: We have two older brothers -- older than us -- and the oldest one was a D and the other one, Chad, is a forward. So I think he wanted to be like Matt and I want to be like Chad.

Q: What’s the best part about having a twin brother?
A: The car is warm, most of the time, and just someone always there to hang out with.

Q: What’s the worst part about having a twin brother?
A: Our parents get mad at me for doing something he did -- that was when we were younger. But now I don’t know if there’s a worst part about it.

Q: You scored on a penalty shot agaist Wayzata the other night. Going all the way back to your days as a youth hockey player, how many penalty shots would you guess that you have had?
A: I think I’ve only had one and that was sophomore year.

Q: How many different breakaway moves do you have in your repetoire?
A: I think I've got three but they all have like three or four variations to it.

Q: Who is the best hockey player you’ve been on the ice with?
A: Nick Leddy, easily.

Q: Just before the season you decided were going to play in USHL, then you changed your mind and decided to stay at Eden Prairie. How stressful and crazy was that 24-hour period?
A: It was stressful but I guess I learned where my heart was and I guess that’s all I could ask for.

Q: Why did you make that decision to leave so late, and then what prompted you to stay with the Eagles?
A: Why I made it so late -- I dunno why I made it so late. I just thought after the Elite League that I thought I should have gone and played. Then after, when it set in that I was leaving, I realized it’s not what I wanted to do. I wanted to stay here and play with the guys. 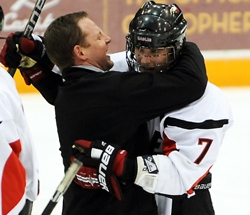 Q: Playing in the Lake Conference, it seems like Eden Prairie has a big game every other night. Who do you consider to be the Eagles’ biggest rival?
A: Our biggest rivalry would be Edina, easily.

Q: Why?
A: Just growing up, we’ve always -- I mean we’re friends with each other off the ice -- but every time Edina’s on the schedule we get amped up a little extra.

Q: It’s not uncommon for opposing team’s fans to direct some of their cheers and comments toward you. What do you think of that extra attention you often receive from fans, especially during road games?
A: To be honest, I kind of like it cause I guess it’s a sign of respect a little bit.

Q: You’ve won state championships as a Pee Wee, Bantam and two years ago as a sophomore in high school. What is your best memory from any of those games?
A: The thing I remember the most is sophomore year, taking the faceoff in the state championship game knowing that this will be my last game with Nick Leddy.

Q: Speaking of Nick Leddy, he was your teammate at Eden Prairie two seasons ago when the Eagles won the program’s first state title. He won Mr. Hockey that year and is now playing for the Chicago Blackhawks. What did you learn by playing with him, and do you two still stay in touch?
A: The thing I learned about him the most was how to handle all the pressure. He had people coming up to him after every game, scouts at practice -- I just watched his demeanor and learned from that. And yeah we still talk. I see him around and talk to him a little bit.

Q: What would it mean to you to win this year’s Mr. Hockey award?
A: It would mean a lot. It would be good for the program and I’m sure the guys on the team would love it just as much as I would love it.

Q: Your brother, Chad, plays for the Houston Aeros of the AHL and is the property of the Minnesota Wild. What cool tricks or tips has he passed along to you?
A: The biggest thing he’s taught me is my faceoffs -- all the different moves to do. If I ever have a problem with a move or something, how to get around a D, I’ll call him and he’ll let me know.

Q: What advice would you pass on to young players hoping to play at the high school level and beyond?
A: I would say take it slow and I would say wouldn’t worry about where they are now. Guys get better, guys go through puberty and take your time. You’ll be fine. 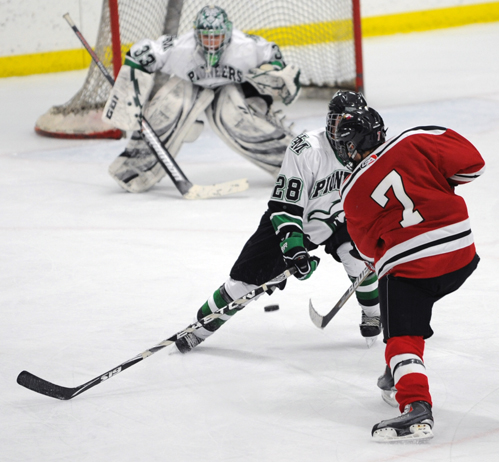 Eden Prairie senior center Kyle Rau (7) has committed to play at the University of Minnesota next season. Photo by Helen Nelson 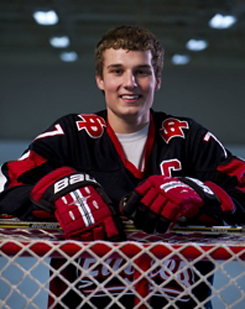 Click here to read more about Kyle Rau, the Star Tribune's Metro Player of the Year

School: Eden Prairie
Year: Senior
Position: Center
Height: 5-foot-9
Weight: 160 pounds
Credentials: Rau, one of 10 finalists for the Mr. Hockey Award, has 36 goals and 38 assists to follow his 81-point (40 goals, 41 assists) junior season. Rau was a key player as a sophomore on the Eagles' 2009 state Class 2A championship team. He scored the winner in double overtime in this year's Section 6AA championship game against Wayzata.
College committment: Univeristy of Minnesota. Rau will play for the Gophers starting next season as a true freshman.

Favorite non-hockey related activity: I like to jet ski

Foreign city you would love to visit: Paris

Movie you never want to see again: I dunno. I’m not a big movie guy,

Car you drive: Me and my brother share an Acura TL.

What sport, other than hockey, do you enjoy playing most? Tennis