Ross Luedtke's hat trick vs. Blake in the section semis 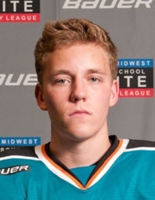 It was the kind of play around which legends are built.

Orono trailed No. 1-seeded Blake 2-1 in the final minute of the Class 2A, Section 2 semifinals. With 47 seconds left, Orono's Ross Luedtke nudged home a loose puck that had squirted out from behind the net to tie the score 2-2.

Twenty-five seconds later, Luedtke picked up the puck and cruised down the right wing. He stumbled briefly, got back to his feet, slipped the puck past the defenseman with one arm, kicked it to his forehand and slid it under the Blake goalie for one of those "I can't believe what I just saw" moments and a 3-2 victory.

No. 4-seeded Orono nearly pulled off another upset, leading two-time defending Class 1A champion Breck 3-1 late in the third period before the Mustangs rallied for a 4-3, double-overtime victory. Luedtke scored three goals in the loss, his third hat trick in as many section playoff games. Staff writer Jim Paulsen talked with Luedtke about his playoff heroics.

Question: It's been a couple of days since your last game. Now that you've had time to think about it, what are your feelings about the team's performance in the section playoffs?
Answer: The team just played amazing, If you look at the Breck game, we played textbook hockey for the first two periods. Even in the third period, we played great. We just got a bad bounce and things didn't go our way.

Q: Talk about the Blake game. Your game-winning goal was pretty amazing. What are your recollections?
A: We had pulled our goalie and just hoped for the best. Realistically, you don't think things like that are going to happen. I got a break and a chance and somehow the puck went in.

Q: Describe what happened.
A: I was skating down the side and somehow I caught a toe and went down. But I was able to keep the puck in front of me and I got up real quick and kept the play going. Everything else just kind of happened. It was crazy.

Q: What were your feelings after the puck went in?
A: I was absolutely gassed. I was kind of in shock. I raised my arms up, but I was so tired, it was hard to even stand. It was awesome to go from a season-ending loss to winning that fast.

Q: I'm sure you've seen the play on video. Does it amaze even you?
A :When I watch it, I kind of got chills. I'm still kind of in shock that it happened to me. It's the type of goal you watch 50 years from now and say "wow."

Q: The team had to play Breck just two nights later. Was it tough to put the previous game behind you?
A: A little. The guys were really excited to play that game and kept saying that we're going to win, but all anyone was talking about was the goal and beating Blake. It was hard to get focused, especially since we had one day of practice.

Q: Orono had its chances to beat Breck, too, but lost in double overtime. Have you put that game behind you or are you still replaying it in your mind?
A: You say you've done everything you can and the team really played well in that game. But you do have sleepless nights thinking about it. You think, "Maybe if I had one more rush or took one more shot." But at the end of the day, we did everything we could.

Q: Are you going to watch the state tournament?
A: That could be tough, going and thinking that we could have been there. I don't know if I'll go watch.