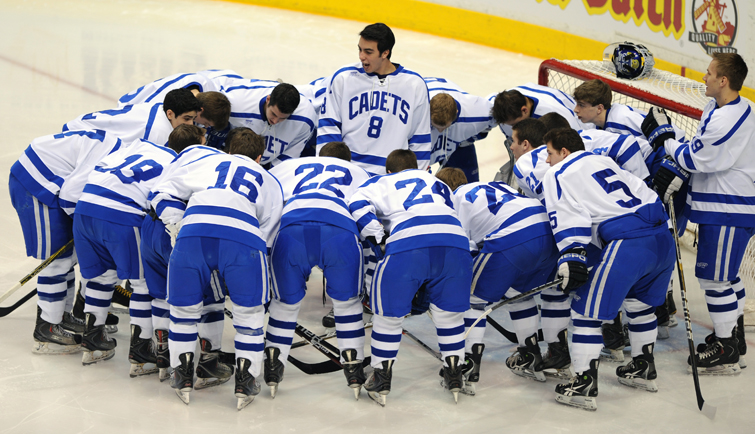 St. Thomas Academy senior Michael Ferreira leads the Cadets in a pregame prayer before their state Class 1A quarterfinal against New Ulm. Photo by Helen Nelson

St. Thomas players skate to the bench after scoring a goal in the first period (Photo by Jordan Doffing).

After the glitz and glamour of the player introductions during the Class 1A quarterfinal matchup between St. Thomas Academy and New Ulm, the Cadets eased into a familiar zone.

Each and every St. Thomas Academy player circled around senior forward Michael Ferreira in front of the Cadets’ goal.

From there, Ferreira led the Cadets in their pregame ritual prayer. 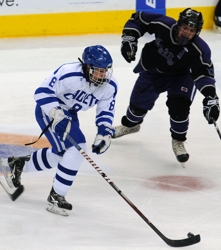 “Dear Lord,
In the battles we go through life
We ask for a chance that's fair.
A chance to equal all our strife,
A chance to do or dare.
And if we shall win,
Let it be by the code
With faith and honor held high.
And if we shall lose,
Let us stand by the road
And cheer as the winners go by.
Day by day
We get better and better.
Until we can't be beat,
Until we won't be beat.”

Ferriera is not a captain and, although a senior, is perhaps an unlikely candidate to be at the center of attention.

So how did he get the job?

“I don’t know -- the team just picked me,” Ferriera said. “I’m always one of the louder ones in the locker room, one of the more outgoing ones so they said, ‘Ferriera you can have it.’”

For those that recognize the words, Ferreira was quick to credit the prayer.

“We actually stole it from the (Nebraska) Cornhuskers,” Ferreira said. “We did it for about half of this season and we started winning with it and we stuck with it. It gets the team fired up and it’s just ritual now.”

The prayer must have worked for this game as St. Thomas Academy scored seven straight goals in the first period on its way to a 13-2 victory.

Despite having players that frequent the score sheet such as Zach Schroeder, A.J. Reid, Matt Kroska and Taylor Fleming, the Cadets did not rely on its top line for production.

“That’s a coach’s dream to have three lines that can score,” St. Thomas Academy coach Greg Vannelli said. “It’s taken a while to get the right guys on (the third line). We finally think we got the right three. There’s been stretches where they’ve scored five games in a row.

“Their number one goal is to not give up a goal and if they can score it’s great. Tonight they were able to do that.”

Ferreira admitted that although scoring is not necessarily his line’s top priority, things clicked tonight. 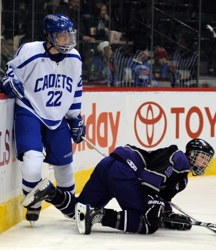 “We usually just try to set up low and get defense first, grind in the corners and pucks started bouncing our way as we got feeds in front of the net,” Ferreira said. “Peterson got the first one started, then I got a great feed from Eichstadt and just a great effort from all of the linemates all around.”

Ferreira -- who scored two goals and added an assist -- also admitted that he wasn’t planning on his big night.

“I wouldn’t believe it,” Ferreira said. “It’s a great feeling. I just hope I can keep it up for the next two bigger games and keep my linemates going as well.

“My line just never quits. We got three great guys on it, no one stops and we have great chemistry right now.”

Though several of St. Thomas Academy’s seniors remember winning the 2008 Class 1A state title, Ferreira was not a member on that team and is in the large group of Cadets experiencing their first state tournament as a participant.

“It’s pretty unreal,” Ferreira said. “It’s a surreal experience. First year coming up playing in this big of tournament and this atmosphere -- it's crazy.”

The craziness continues for the Cadets on Friday, March 11, as they will play against the winner of the Thief River Falls/Breck quarterfinal game in the Class 1A semifinal game at 1 p.m. 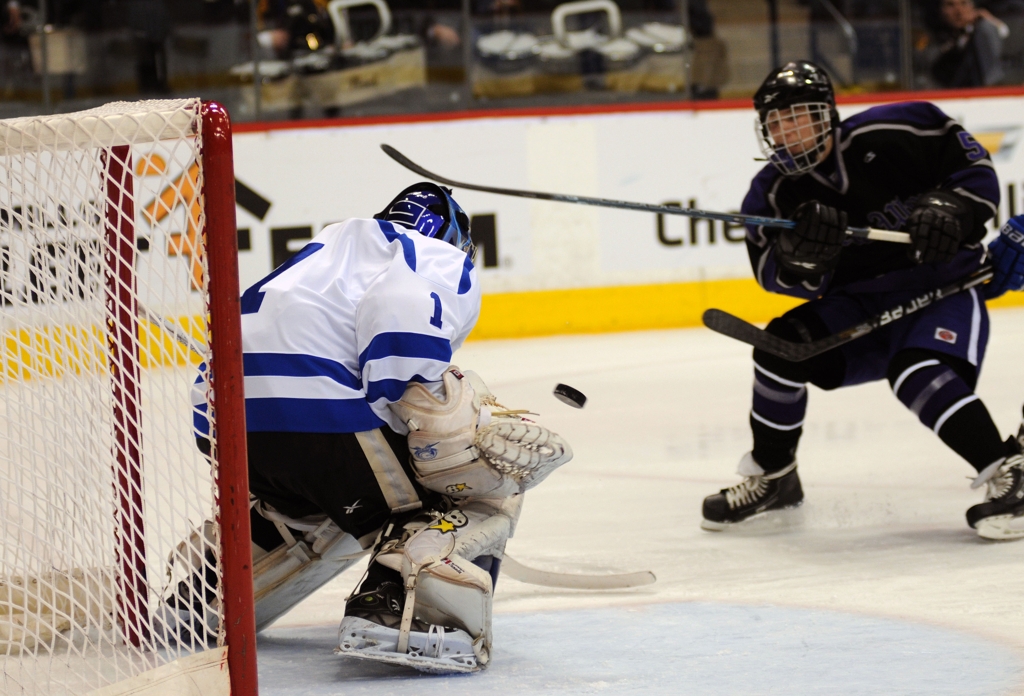 Luck of the draw? 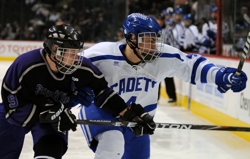 Shortly after his team lost 13-2 to No. 1-ranked St. Thomas Academy in the state Class A quarterfinals, New Ulm coach Erik Setterholm was asked what it was like to play the powerhouse Cadets’ program.

After all, both are Class A teams, so why the big difference?

Setterholm cut off the question and answered with a rhetorical one, “But are we?”

Officially, yes.
But on the ice, the disparity was apparent. St. Thomas Academy was too quick, too deep and too skilled.
“We’re not talking the same …” Setterholm considered, searching for the right words on Wednesday, March 9, at the Xcel Energy Center in St. Paul.
“We’re not talking apples to apples.”
With little commonality in their schedules and programs, it’s tough to compare Eagles to Cadets.
New Ulm earned the South Central Conference and the Section 3A titles, largely playing small schools south of the Twin Cities. Setterholm compared that to the Cadets’ schedule, which was loaded with powerful Class AA teams from the Classic Suburban, including then-No. 1 Hill-Murray.
There was no crossover, until Wednesday night.
For Setterholm and New Ulm, the lopsided defeat at state was all too familiar.
Last year, in its first state appearance since 1992, the Eagles drew No. 1 Breck – another Twin Cities private school with a big-school schedule -- in the quarterfinals. The Mustangs pumped in a record-tying seven second-period goals in an eventual 11-1 victory. It was a rapid-fire outburst. Five of those goals came in a span of 1:57, four in 52 seconds and three in just 25 seconds.
The pain was extracted earlier Wednesday night, as St. Thomas Academy scored seven goals in the first period en route to an 11-goal victory. The seven goals in a period tied the all-time state tournament record, set in 1945 by Eveleth and later tied by Hill-Murray in 1991.
“Obviously the way they came out in that first period, we’ve never seen anything like that,” said Setterholm, who paused briefly before thinking back to last March.
“Well, probably since last year when we had Breck.”
Congratulations and welcome to the state hockey tournament, New Ulm.
Your reward?
Another game against the No. 1 team in the state -- and another one-sided quarterfinal exit. Not much like your usual Class A hockey.
“The funny thing is we’ve played teams on the other end of it,” Setterholm said of his team’s South Central slate.
“It’s a different feeling.”
-- Tim Kolehmainen, Breakdown Sports USA 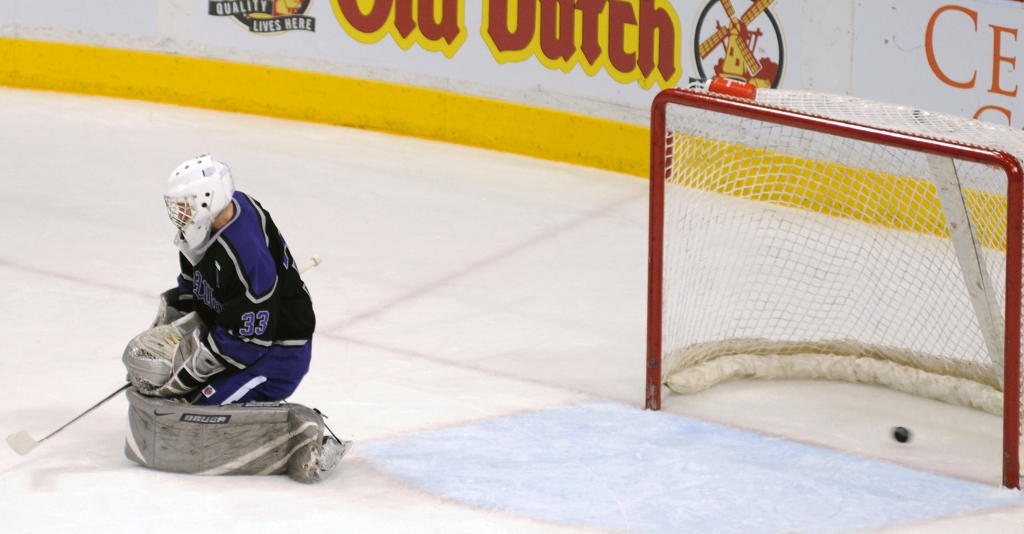 The puck flies into the back of the net past New Ulm Goaltender Blake Burgau (33) during the 2nd period (Photo by Jordan Doffing).

Mere seconds into Wednesday’s Class 1A quarterfinal against New Ulm, the St. Thomas Academy student section erupted with a unified cheer of, “This one’s over!”

As they say, it’s not bragging if you can back it up.

No. 1-seeded St. Thomas Academy did just that, rocking New Ulm for seven first-period goals from seven different players on the way to a 13-2 victory. Andrew Commers jammed in a rebound for a short-handed goal three minutes into the game, Zach Schroeder scored a highlight reel goal (right wing rush and a top-shelf shot) to make it 4-0 and the Cadets cruised from there.

1. A.J. Reid, St. Thomas Academy
A senior forward, Reid had two goals and two assists to bump his season point total to 60 (24 goals, 36 assists). Reid had three of his points in the first period, when the Cadets erupted for seven goals.

2. Michael Ferreira, St. Thomas Academy
A senior on the Cadets’ third line, Ferriera had two goals and an assist. He had scored just 12 points in 28 games entering the state tournament.

3. Matt Kroska, St. Thomas Academy
The speedy senior, a 5-foot-9 forward who serves as the Cadets’ sparkplug, had two goals and two assists and has 53 points (27 goals, 26 assists) this season.