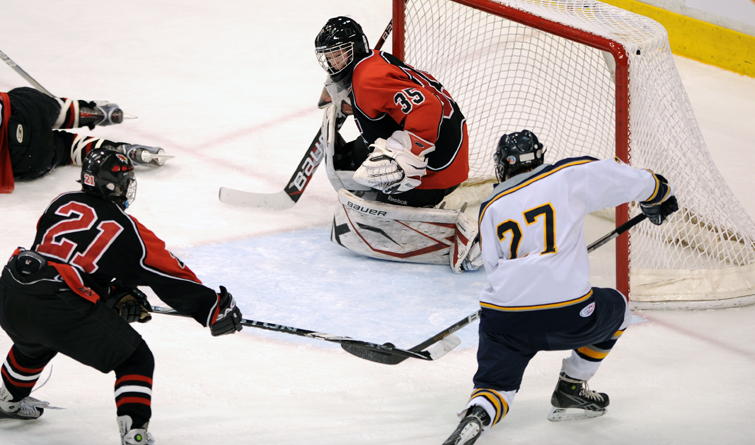 Hermantown sophomore Travis Koepke swats the puck out of the air as Alexandria goaltender Ben Allen slides to get in position during the second period of the Hawks' 5-1 victory. Photo by Helen Nelson

Hermantown's Garrett Skrbich (17) shoots the puck into the net past a sprawling Scott Hennen (14) and Ben Allen to tie the game 1-1 (Photo by Jordan Doffing).

Pregame predictions favored Hermantown, and the game’s result matched the forecast as the Hawks defeated Alexandria 5-1 in the a state Class A quarterfinal game on Wednesday, March 9.

There was one little surprise, however.

After one period of play, there was no score at the Xcel Energy Center in St. Paul.

“We played a solid first period,” Hermantown senior forward Garrett Skrbich said. “It didn’t quite bounce in the net, but we wanted to keep it up and we wanted to get a little more physical in second.”

Physicality would have to wait as Alexandria’s Jordan Domine netted a quick wrist shot five seconds into the second period. 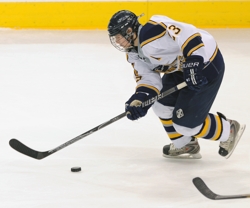 “That really kinda percolated the guys a bit so they went after it pretty hard,” Hermantown coach Bruce Plante said. “Giving up that goal certainly gets the competitive juices going to all the players -- now they have a little fear to play with -- and it gives them a little more energy to play with.”

If Domine’s goal was what Hermantown needed, the Hawks didn’t fail to respond.

“Quite honestly we kinda woke the giant at that point,” Alexandria coach Scott Woods said. “I think that’s when they picked it up and made it more difficult on us.”

The early goal sparked a five-goal, unanswered burst by Hermantown that started with a power-play goal by Skrbich, 44 seconds after Domine’s goal.

“From there we just rolled,” Skrbich said.

“I think Mattson tried to pass to me through center ice and it got tipped up over their D,” Thomas said. “I was chasing after it and I saw the goalie come out, out of the corner of my eye, so I tried to pull it around him.

“Well, I kinda whiffed on it and then the puck just rolled through his armpit when he was laying on the ice and rolled in the net.”

Not likely how Hermantown drew the play up, but the Hawks weren’t complaining.

“I’ll take it any day of the week as long as it goes in,” Thomas said.

Hermantown sophomore forwards Koepke and Benson also netted key goals, providing the Hawks with a boost from their depth.

“Everyone expects (Skrbich and Thomas) to put it on but when you get a chance like that, it just makes your day to score,” Benson said. “We have to do that and try to keep the other team’s third line off their board.”

Fellow third-liner Koepke had a big, braces-revealing smile after the game.

“All these guys that have never been to a state tournament before say they would do anything to get there,” Koepke said.

“To be here as sophomores and score is pretty exciting.”

Up next for Hermantown is a semifinal battle at 11 a.m. on Friday, March 11 against the winner of the other opening-session Class 1A quarterfinal between Rochester Lourdes and Hibbing-Chisholm.

On the other side of the bracket -- barring any upsets -- will feature an interesting semifinal matchup the Hawks have their eyes on as the game is likely to be between St. Thomas Academy and Breck.

Hermantown lost to Breck in the 2010 Class 1A championship, however St. Thomas Academy has held the No. 1 ranking for a majority of the 2011 season. That said, when the Cadets weren’t the top-ranked team -- the Hawks were.

“We want to play St. Thomas (Academy) but we gotta win Friday first,” Thomas said. “Hopefully they can make it through so we can play them and see who the real number one team is in the state.” 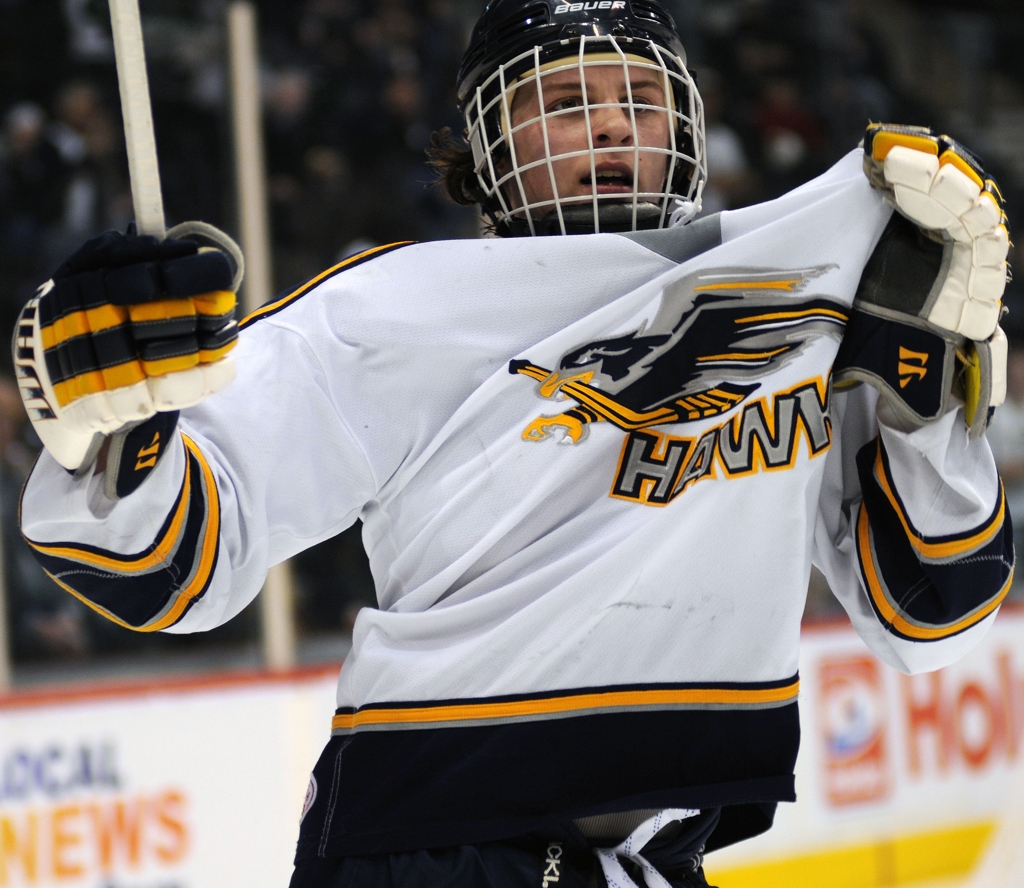 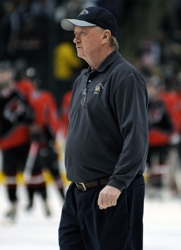 Sparky Anderson was known for his over-the-top praise when discussing the greatness of his players. More often than not, it proved to be nothing but hyperbole.

Fun-loving Hermantown coach Bruce Plante has never been compared to the former Major League Baseball manager, so when he gushes over one of his players, it’s best to take note.

On the eve of the state tournament, Plante gave Hawks forward Garrett Skrbich the highest of praise. Plante, who has coached a bevy of Division I prospects since he first started with the Hawks in 1983, called Skrbich’s senior season the best he’s ever experienced.

“It’s a big honor to be up there with those kind of names,” said Skrbich, who went out and earned his coach’s praise by leading the second-seeded Hawks past Alexandria 5-1 in the first Class A quarterfinal Wednesday, March, 9 at the Xcel Energy Center in St. Paul.

Skrbich’s power-play tally 49 seconds in the second period erased a one-goal deficit and kicked off five unanswered goals for the favorites.

“There really was a wakeup on the bench,” Skrbich said. “Once I got that goal, there was a quick passion and everyone wanted to get back and score one again.

“From there, we just rolled on.” 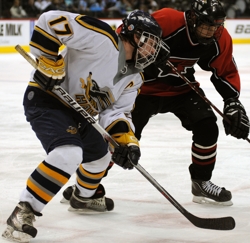 The goal, his school-record-tying 40th of the season (tying Radovich’s mark), came just 44 seconds after Jordan Domine had given Alexandria a 1-0 lead. It’s tough to argue that the worst thing Alexandria could have done was score, but that’s exactly the way it appeared.


Talk about poking a Hornets’ nest.

“Quite honestly, we kind of woke the giant at that point,” Alexandria coach Scott Woods opined.

“When they scored, that kind of percolated the guys a bit,” joked Plante.

“It got their competitive juices flowing,” Plante said. “Now they’ve got a little fear, and it gives them some energy to play with.”

As he was for much of the season, Skrbich was the catalyst.

With the Hawks on the power play, Skrbich set up camp in front of the Cardinals’ net, screening goaltender Ben Allen on the initial shot from the point. He scooped up the rebound, took one giant stride to his left and tucked the puck into the open net.

Hermantown scored three more times in the next six minutes. The Hawks were off and running.

It was the senior’s only goal of the afternoon, but he had numerous other scoring chances that just missed their mark. Skrbich controlled the puck offensively, not allowing Alexandria to counter.

“We knew we were really going to have our returners from last year really step up and big leaders,” said Skrbich, who was overshadowed last winter by a powerful senior class that led the Hawks’ to the Class A title game.

When those 14 seniors graduated, many expected Hermantown to take a step back. Skrbich wasn’t one of them. He set right to work.

“It’s all about the offseason,” said Skrbich, who listed off his summer pursuits.

Shooting pucks.
Working hard.
Unlike his predecessors above, Skrbich wasn't named a finalist for Mr. Hockey this winter, an oversight according to his coach. But the senior has never been in the game for his own glory. Skrbich is more interested in another trophy, one that eluded the Hawks last year: the Class A state championship.
-- Tim Kolehmainen, Breakdown Sports USA

Alexandria took the first lead of the tournament on a goal early in the second period of Wednesday’s Class 1A quarterfinal at the Xcel Energy Center. But falling behind failed to rattle No. 2 seed Hermantown.

Hermantown (24-3-2) coach Bruce Plante said the Cardinals’ goal “percolated our guys a little bit. It gave them a little bit of fear to play with.”

1. Jared Kohlquist, Hermantown
A junior defenseman who was an all-state tournament selection last year, Kohlquist had a rousing start to this year’s tourney by unloading a stunning 13 shots on goal, one less than Alexandria’s team total. Most of Kohlquists shots were low cannon blasts that led to rebound opportunities. He also had one assist and two quality hits while playing his usual hard-edged defensive game.

2. Chris Benson, Hermantown
Benson, a sophomore forward, scored a gorgeous upper-shelf goal to cap the Hawks’ five-goal second period outburst. He also added an assist and finished with a plus/minus rating of plus-2.

3. Garrett Skrbich, Hermantown
Skrbich was all over the ice and all over the puck all game, nothing unusual for the Hawks' senior captain and scoring leader. Skrbich cashed in on just one of a handful of golden scoring opportunities while unloading 11 shots. His goal was his 40th of the season, tying the program record set by B.J. Radovich in 2001.