Ignorance is bliss for Edina goalie 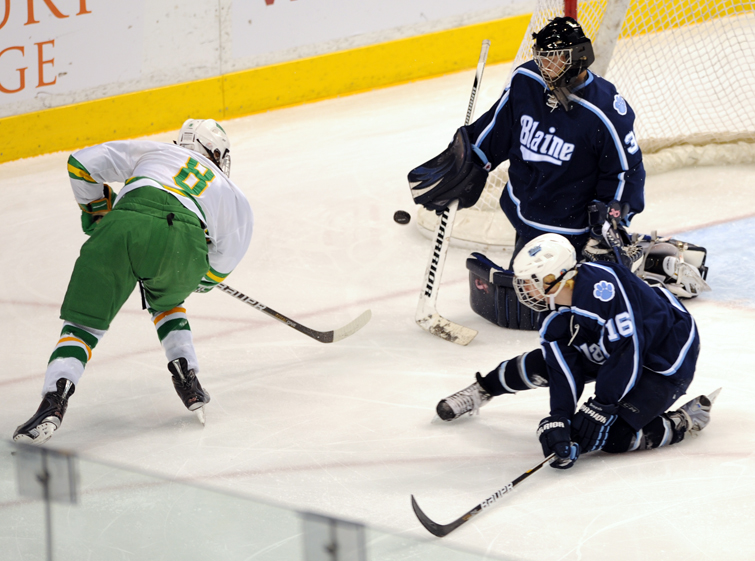 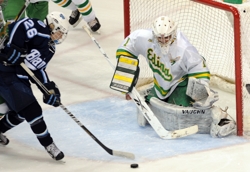 Connor Girard admitted he didn’t know who was at the other end of the hot shots he was stopping.

The Edina goaltender shrugged when he was asked how he felt about repeatedly robbing Blaine's Mr. Hockey finalist Jonny Brodzinski.
Who?

Whether it was by design or by ignorance, it worked. Girard casually dismissed any nerves that might have cropped up just as he casually turned aside shot after shot by Blaine – and, particularly, by Brodzinski.

“He’s not paid to think, he’s paid to stop the puck,” joked Edina coach Curt Giles.
It’s been a good investment for the Hornets.

After making 17 saves in a 3-2 victory over Blaine in the Class 2A quarterfinals Thursday morning at the Xcel Energy Center in St. Paul, Girard is now a perfect 10-0-0 in playoff games since he took over full-time goaltending duties late last winter. He backstopped the Hornets to a state title as a junior – and now has them two victories away from a repeat.

“I just try to take away as much of the net as possible and challenge them,” Girard summed up his strategy in big games.

Jake Sampson and Andy Jordahl scored goals 2:13 apart early in the second period to erase a 2-1 deficit and send the Hornets (19-7-2) into the semifinals Friday night against the winner of the Duluth East-White Bear Lake semifinal.

Blaine (20-5-4) had led after one period on two special teams goals -- a power play blast from the point by Michael Brodzinski and a short-handed snipe by Jonny Brodzinski. Nick Malvin was also impressive in the Blaine net, with 24 saves on 27 shots.

But Thursday afternoon, it was Girard’s show.

With Edina clinging to a one-goal lead in the third period, Girard was at his best – largely at the expense of Brodzinski, who had five third-period shots and a game-high nine in total.

“Whenever he got in the zone, I was aware that at any moment, he could get that shot off,” said Girard

Still, Girard wasn’t taking numbers when he was making saves. He stymied the Bengals’ top goal-scorer on numerous chances, including a 2-on-1 midway through the third that had the crowd oohing and aahing. Taking in a pass from Jesse Norling, Brodzinski ripped a one-timer that appeared headed for the back of the net.

But Girard flashed his leg out, kicking the shot away.

“Some of the chances I had, I thought I could put away,” shrugged Brodzinski. “But their goalie played a great game.”

“I didn’t know it was him,” admitted Girard. “No matter who it is, my job is to stop the puck.”

Girard has had more than one opponent shaking his head in disbelief during the playoffs the last two years. He’s been exactly what the Hornets have needed in net, a calm and unfazed presence between the pipes.

At times, it seems as if Girard doesn’t realize he’s not supposed to stop every puck.

“That’s my job, to stop the puck,” said Girard. “I understand that I’m supposed to make the save no matter what. No matter who is shooting. No matter the shot.” 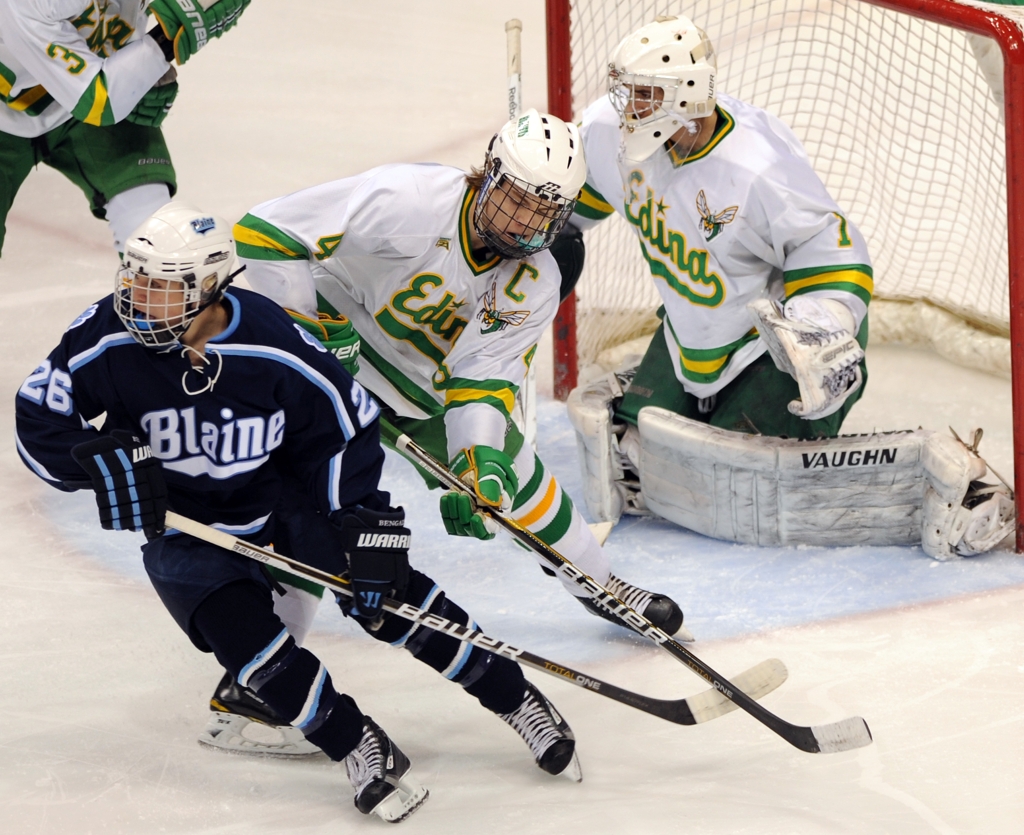 From down and out to the state tournment 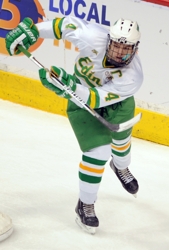 Edina's Max Everson is playing with a splint on his injured wrist (Photo by Helen Nelson).

It was the injury heard ‘round the state.

With the final seconds ticking off the game clock during the Thursday, Feb. 10, matchup against Minnetonka, Edina defenseman Max Everson was checked awkwardly into the boards of Pagel Activity Center while centering the puck.

Though Everson’s pass set up an empty goal that would seal the Hornets’ victory over Minnetonka and the Skippers’ first home loss since January 10, 2009, the cost was difficult to bear.

Everson was forced to finish the game with a trip to the emergency room after leaving with a wrist injury.

“When I first saw it, I thought I was done just by the way it looked,” Everson said.

The rest of the Hornets quickly realized the severity of the injury.

“As soon as I saw his arm my heart dropped,” Edina forward Steven Fogarty said following the Feb. 10 game. “I didn’t even know what to say.”

“It ended up the next day that I got that surgery on it and the doctor told me I’d be able to go in a couple weeks if I felt good enough,” Everson said. “So that made me happy. I didn’t know exactly what level I’d be playing at but I got to come back in the semifinals during sections.

“It took a little bit to get back playing the way I felt that I could but it was good. I’m happy that I’m able to contribute.”

The decision to return may have left some scratching their heads as Everson had verbally committed to Harvard University a month prior to his injury.

Did the Hornets’ senior co-captain have any second thoughts?

“No,” Everson said. “I was just like, ‘Ok. Perfect.’ I wasn’t going to ask any questions. I was just sticking with that answer.”

With the injury to coming to Everson’s left wrist -- his bottom hand -- extra precautions had to be taken besides a successful surgery.

“I had the hard cast on at first and that wasn’t going to work,” Everson said. “So I talked to the same doctor over at TRIA Orthopedic Center. They gave me this splint that they have -- I dunno, I’ve never seen it before -- and they just said it’s something they just got and it works really well.”

The splint may be working well, but Everson admits he is still not completely at 100 percent.

“It’s gotten a lot better,” Everson said. “There’s some limitations with shooting the puck but nothing you can’t work around -- just pass it instead of shoot it.”

That limitation didn’t stop Edina’s top defenseman from taking a slap shot -- one of his first in game action since the injury -- during the Hornets’ 3-2 victory over Blaine in the Class 2A quarterfinal.

Previously during section playoffs, Everson had either opted to send a wrist shot on net or pass instead taking a hard slap shot.

“I don’t think anything was going through my head -- I think that’s why I took it,” Everson said. “It was a perfect opportunity and I’ve been working towards that way. I got a week off after sections which helped.

“I’m getting to a point where I can start making those plays again.”

That's good news for Edina, as Everson has several years of state tournament experience which has transitioned to leadership for the Hornets’ underclassmen.

“Just play your game, it’s simple,” Everson said of his advice to Edina’s younger skaters. “It’s the same size ice sheet as we play on all year so it’s the same game. There’s more people up there but you just gotta take that and use it as excitement not get nervous because of it. You just gotta channel your emotions the right way.

“It’s something you’re not going to get a chance to do again to the seniors and I told the underclassmen that you never know if you’re going to get back. No one is making any promises for next year. You just gotta leave it all out on the ice.”

Despite his heavy experience, Everson noted that playing in the state tournament never loses its glamour.

“If anything it just gets better and better,” Everson said. “When you know what to expect, you know it’s such a great thing. The excitement when you’re coming up to it -- like the days before this, I couldn’t even sleep because I was so excited.

1. Connor Girard, Edina
The senior goaltender flashed the form that helped Edina win last year’s Class 2A title, and his stellar play will probably give Blaine star Jonny Brodzinski nightmares. Girard finished with 17 saves, a modest total, but more than half of those were of the Grade A variety, especially the eight in the third period when the pressure was dialed up.

2. Jonny Brodzinski, Blaine
The senior forward and Mr. Hockey finalist had nine of the Bengals shots, and most times he put them in places that would result in goals. Not against Girard. Brodzinski did score late in the first period to put the Bengals ahead 2-1.

3. Max Everson, Edina
The Hornets senior defenseman took a slap shot – a slap shot! – despite his broken left wrist. The shot led to a goal by Michael Sit. Every time Everson had the puck, which was most every shift, he seemed to make the perfect decision with the pass. The Harvard recruit and Mr. Hockey finalist also finished with a team-high five hits, including a few that rattled the Xcel Energy Center boards and Plexiglass.

Thursday’s 3-2 victory against Blaine in the Class 2A state tournament quarterfinals echoed the Hornets’ title run one year ago. Three different lines scored a goal, the defensemen limited chances and goaltender Connor Girard made key saves.

“This year is a new year, but we’ve gotten contributions from everybody,” Edina coach Curt Giles said. “We’re pretty proud of our depth.”

No. 2 seed Edina went ahead 1-0 as Michael Sit and the first line struck for a first-period goal. Then Blaine, its players sporting matching bleach-blond hairdos, made its mark with two special teams goals.

Trailing 2-1 at the first intermission, Edina players heard from Giles in the locker room.

“We came out a little slow in the first period,” forward Jake Sampson said. “So in the locker room we got a little pep talk from our coach. We realized we worked hard to get to this spot, and we weren’t going to let it slip out of our hands.”

Sampson punched in a loose puck at 2:09 of the second period during a scramble near the Blaine goal. And Andy Jordahl, a fourth-line center, flipped a backhand shot over Blaine goaltender Nick Malvin’s glove at 4:22.

“It got away from us for just a few minutes,” Blaine coach Dave Aus said. “In the third I thought we could have tied it about three or four times.”