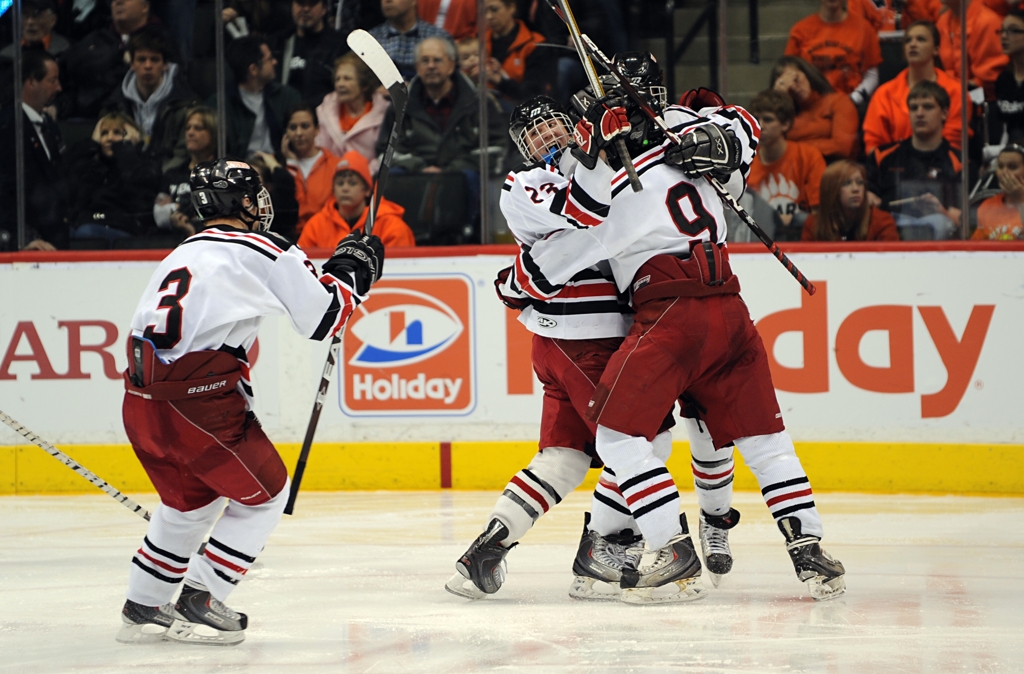 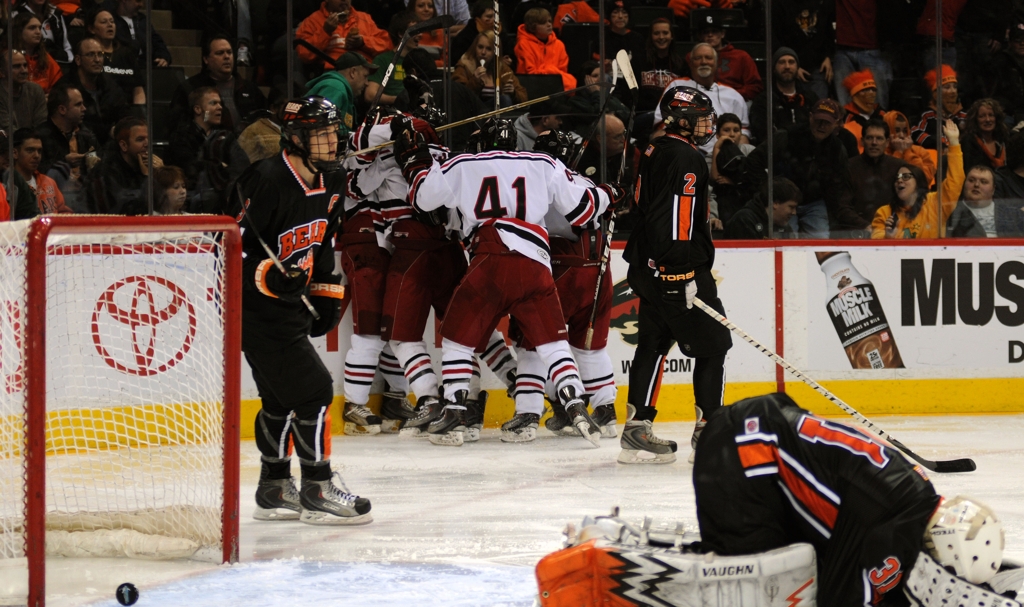 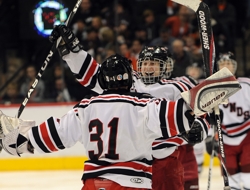 Though it has been en vogue for more than two decades in the NHL, hockey’s four-letter word to high-revving offenses has filtered down to the high school level only recently.

Duluth East coach Mike Randolph said he’s seen more ice-clogging, pack-the-neutral zone, lay-back-and-pounce schemes in the last month than he has in his entire 22 years as a head coach.

“I’ve never seen in my career so many teams that trap us,” Randolph said after his Greyhounds beat White Bear Lake 4-3 in double overtime on Thursday, March 10, in the state Class 2A quarterfinals in St. Paul. “I mean, they didn’t trap (Dave) Spehar and (Chris) Locker.

“(Grand Rapids) trapped us. Everybody is trapping us. We can’t wait until we play a team that lets us open up a little bit.” 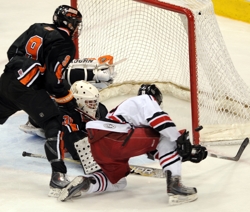 Spehar and Locker formed one of the state’s all-time great scoring tandems, a dynamic duo that led the Greyhounds to a state title in 1994.

White Bear Lake, much like it did in the Section 4AA championship against Hill-Murray, played a conservative forecheck that required waiting for the Greyhounds to reach the neutral zone before applying pressure.

It’s a style that is commonplace in the NHL, employed most famously by the New Jersey Devils under coach Jacques Lemaire. While high school teams have dabbled with the same concepts, Randolph said it’s a system that can be a tough sell to hard-charging teenagers.

“It’s very difficult to get high school kids to be sitting back and trapping, and they’re very disciplined at it,” Mike Randolph said. “Even (the Bears’) top players. I’m really impressed.”

Even with the extra attention, Toninato and Olson managed goals against the Bears (21-6-2). Fittingly, though, it was second-liner Zach Schendel who fired home the winning goal 1 minute, 19 seconds into the second overtime. 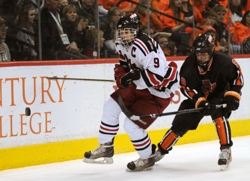 Schendel said he didn’t hear the thundering roar of the more than 17,000 in attendance at the Xcel Energy Center.

The senior might still be out on the ice right now, digging pucks out of corners and crashing the net if not for a crucial piece of information passed along by a teammate.

“I didn’t realize I even scored until one my linemates started coming to me telling me I scored,” Schendel said.

Next up for Duluth East is a semifinal date with Edina at 6 p.m. on Friday. Randolph is looking forward to playing the defending state Class 2A champions, in part because of the Hornets’ go-go philosophy with their forwards.

“I don’t think Edina is going to trap us,” Randolph said.

Zach Schendel (9) works his way out of the corner, just seconds before scoring the game-winner in double overtime. (Photo by Helen Nelson).

Turning on the Love 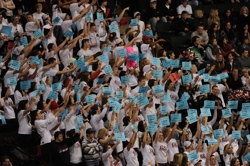 Duluth East student section holding up signs in honor of senior Rachel Sandell during the Class 2A championship game against Edina on Friday, March 4. Photo by Helen Nelson

During Duluth East’s thrilling 4-3 double-overtime victory over White Bear Lake in the Class 2A quarterfinals Thursday, March 10, flashes of cool blue could be seen in the raging sea of red that was the Duluth East student section.

Those blue love specials were signs for Rachel Sandell, 18, a Duluth East senior who was diagnosed with liver cancer last January.

Even with an action-packed hockey game going on, the thoughts of some students in the Duluth East cheerng section were with their missing classmate.

“She has a malignant tumor and she’s in treatment right now in Reno, Nev., so we’re all just coming out to support her and show her that we love her,” senior David Essling said.

A majority of the students in the Duluth East section had blue signs that read, “The Love is on for Rachel!” and proudly displayed the signs throughout the Greyhounds’ exciting win.

“She’s not able to be with us this weekend,” said Carly Wick, a fellow senior at Duluth East. “This is something that she absolutely loves -- she has a lot of school spirit.

“We just wish she could be here with us so we’re just trying to show our support for her.” 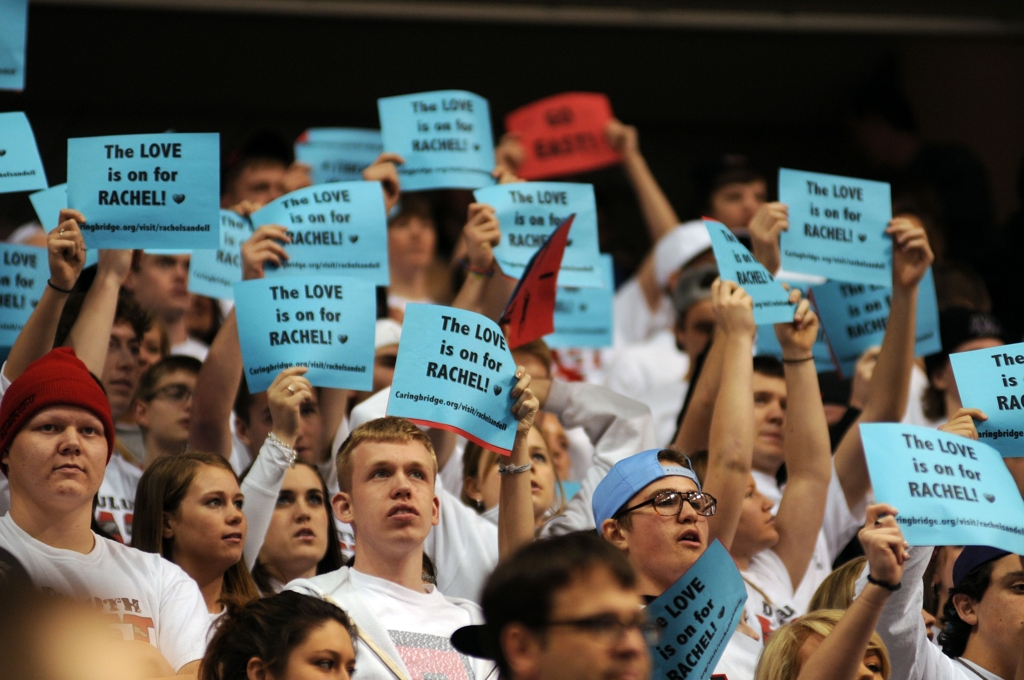 At one point during the game, Duluth East students chanted Rachel’s name when a student at the game had called her.

“The whole time we were thinking about Rachel -- holding up our signs -- we were calling her, texting her and keeping her updated through the whole game,” Wick said.

Along with strong support in the stands, Rachel was also on the minds of the Duluth East players.

“Everyone at (Duluth) East is thinking about her,” Duluth East senior goaltender JoJo Jeanetta said. “We’ve got Facebook groups for her and it’s pretty sad but it’s good to see how she’s dealing with it.”

Not only were the players thinking about Rachel, they’ve dedicated their run in the 2011 Class 2A state tournament to her.

“I hope she just pulls through and stays strong,” Duluth East senior forward  Zac Schendel said. “We’re doing this for her. I feel bad for her -- it's tough.”

Emotions on and off the ice were running high after Schendel scored the game-winning goal for the Greyhounds. Although the goal advanced the Duluth East into the semifinals, Schendel said he was thinking of his friend Rachel.

“I dedicate that overtime goal to her,” Schendel said. “I just want her to get better.”

More information regarding Rachel's story and donation information can be found on both sites. 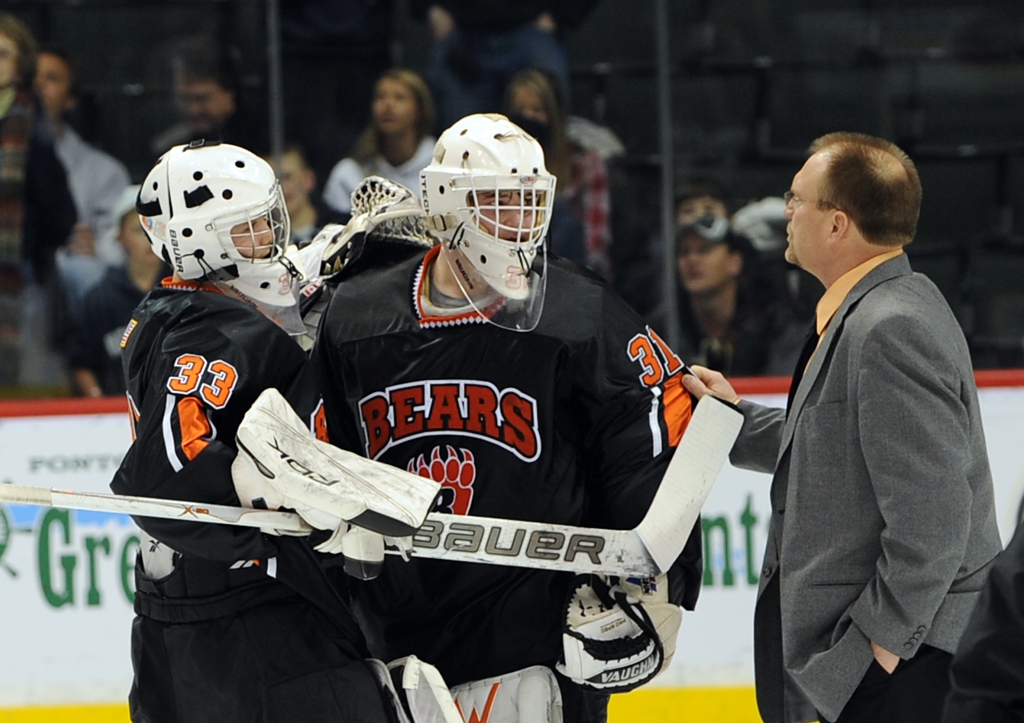 White Bear Lake tied the score in the third period and enjoyed the bulk of the quality scoring chances throughout regulation and the first overtime. But the No. 3 seed Greyhounds refused to concede.

“I told them I was proud of the way they hadn’t quit all season so don’t quit now,” Randolph said.

Neither team relented until Duluth East’s Zac Schendel scored 1 minute and 19 seconds into the second overtime, securing a 4-3 victory.

Even then, emotions died hard. The Greyhounds swarmed each other along the boards while some White Bear Lake players stood almost motionless.

White Bear Lake is now 0-18 in state tournament quarterfinal games dating back to 1945.

Things had gone right for both teams of late. Both reached the state tournament by virtue of overtime victories in their section final games.

1. Zac Schendel, Duluth East
It took a great individual effort from Schendel to end the double overtime marathon quarterfinal between Duluth East and White Bear Lake. The senior captain was battling for a loose puck in the corner to the right of the Bears' net, kicked it to his stick and headed for the slot. He made a quick fake, drew the puck to his forehand and slipped a shot through the five-hole of White Bear Lake's Jared Schletty for the game-winner.

2. Brandon Wahlin, White Bear Lake
The senior forward helped the Bears rally and force overtime, scoring late in the second and early in the third to erase a 2-0 Duluth East lead. The goals were his 30th and 31st of the season.

3. Dom Toninato, Duluth East
The son of former UMD great Jim Toninato, Dom was at the center of numerous scoring chances for the Greyhounds, recording a goal and an assist.