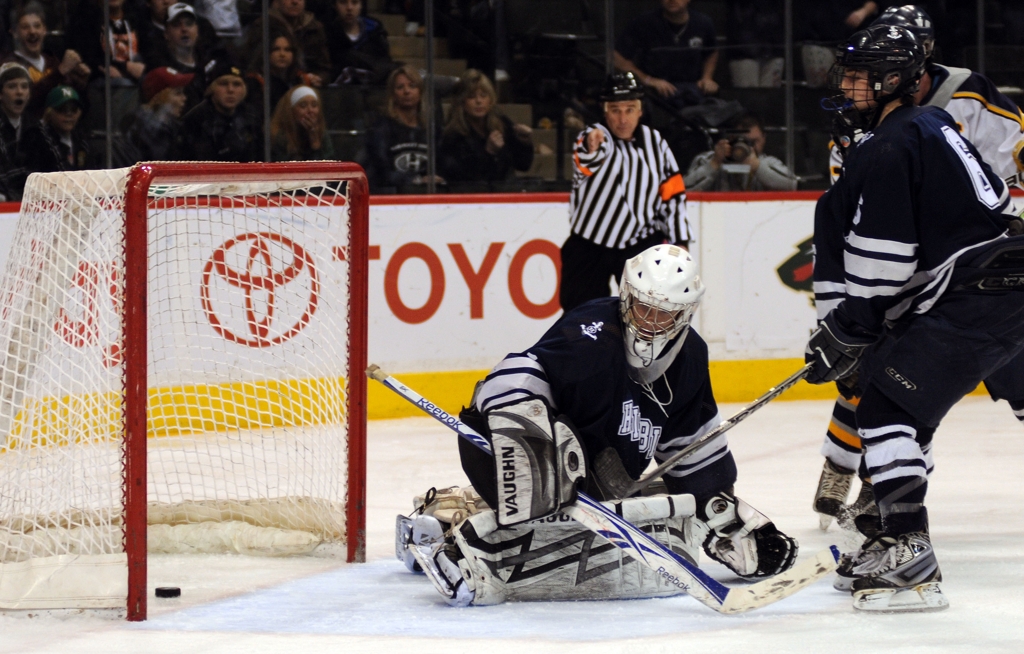 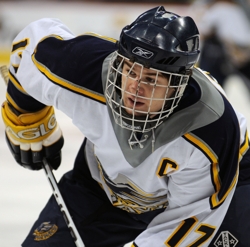 “It’s actually been kind of a curse the last couple years. Our teams have been like that,” Hermantown senior forward Garrett Skrbich said. “We seem to let one in first and from there we start playing.”

Despite giving up those crucial first goals, the second-seeded Hawks again find themselves in the Class 1A championship game after a 6-4 victory over unseeded Hibbing/Chisholm on Friday, March 11 at the Xcel Energy Center in St. Paul.

“It’s a great feeling,” Skrbich said. “We didn’t have many returners but our goal at the beginning was to be right back in (the Class A championship game) again and there was a lot of passion to get here, so it’s really exciting.”

Despite the final two-goal margin, the game was in doubt in the third period. Hermantown had a 4-1 lead in the final minute of the second period -- but quickly saw it slip away on the shoulders of the Bluejackets' sophomore Adam Johnson.

“They got two of their goals on the power play," Hermantown coach Bruce Plante said. "They were unbelievable on the power play. They have some really skilled guys that can move the puck around.”

The Bluejackets’ comeback was fueled by a natural hat trick from Johnson that tied the game at 4. He scored twice in the final minute of the second period to give Hibbing/Chisholm life, then tied it early in the third. 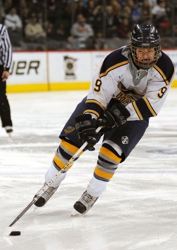 Andrew Mattson scored the game-winning goal for Hermantown, advancing the Hawks to the state Class 1A title game. Photo by Jordan Doffing

“You hope that doesn’t happen and you want do all the smart things and the little things correct so that won’t happen,” Hermantown junior defenseman Jared Kolquist said. “Obviously guys tense up a little bit and maybe stop playing their game but you just got to stay with your game and do what you’ve practiced all year and that’s usually going to help you win.”

Hermantown broke the tie and took the lead for good when Andrew Mattson punched home a loose puck through heavy traffic.

“(Plante) has taught us to just crash the net with everything you’ve got,” Mattson said. “Sure enough the rebound just came to my stick. I just batted away at it and it went in.”

Kolquist added some extra insurance with an empty net goal while Hibbing/Chisholm was on a power play and a six-on-four advantage.

Skrbich saw the puck slide into the net from the penalty box while serving time for an interference minor.

“When I saw it go out the first thing in my head was ‘Come on, please just roll into the net. Come on it can get there,’” Skrbich said. “I was watching (Adam) Johnson chase it and was just hoping he didn’t have the energy to catch it.

“As soon as it went in I had to give the guy in the penalty box a hug, I was so excited.”

Hermantown will play top-seeded St. Thomas Academy -- a 5-0 winner over Thief River Falls in the other semifinal -- in the Class A championship game at noon on Saturday, March 12. 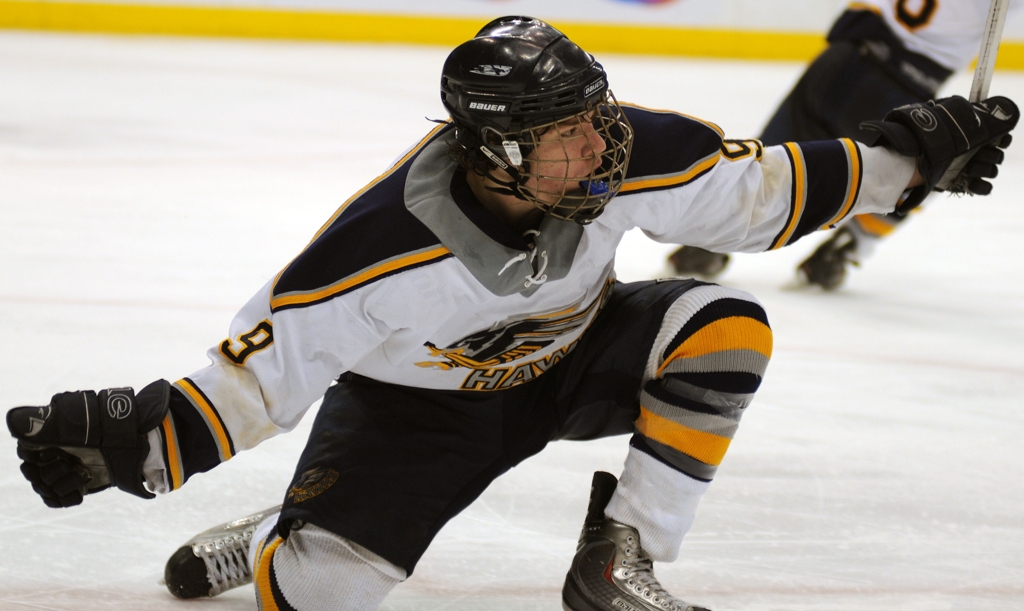 Hermantown's Andrew Mattson celebrates his third period goal to give the Hawks a 5-4 lead. Photo by Jordan Doffing

Plante ready to retire? Don't count on it

It has become a rite of passage each spring, as much a part of the Duluth area as the annual smelt run.

“Did you hear Bruce Plante is retiring?”

“Word is, Plante won’t be back next season.”

“I hear those,” said Plante, 62, who has guided the Hawks to seven state tournaments, winning the Class 1A title in 2007. “With some of them it is wishful thinking. I just keep hanging in there.” 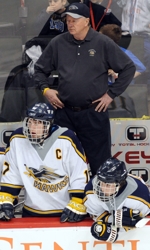 The Hawks beat Hibbing/Chisholm 6-4 on Friday, March 10, at the Xcel Energy Center in St. Paul to reach the state Class A championship for the second straight year. No. 2-ranked Hermantown plays No. 1 St. Thomas Academy on Saturday, March 10.

“I still love it a lot,” said Plante, who said he might resign his physical education teaching position at Hermantown High after the school year. “The kids have changed a lot over the years, but I still love doing it. As long as the kids keep treating me well and working hard for me, I’d like to keep doing it.”

All of Hermantown’s trademark grit and gumption was required in the third period to beat the Bluejackets, who had rallied from a 4-1 deficit in the second period to tie the score at 4.

“He really gets us motivated for the game, he drives us,” said Hermantown forward Andrew Mattson, who scored the game-winning goal against Hibbing with 6 minutes, 10 seconds left in the final period.

Plante, whose son Derek played in the NHL and is a first-year assistant coach at the University of Minnesota-Duluth, said he’s pretty much the same guy he was when he started coaching two decades ago.

“I actually don’t think my approach has changed at all,” said Plante, who began coaching at Hermantown in 1983, but took a six-year break  to scout for the Minnesota North Stars before returning to coach the Hawks in 1995. “I’m pretty intense and I’m pretty demanding that way. But I’ve learned more as I go, I’m a better tactical coach than when I started.”

Few active coaches in the state can match Plante’s win total or seven state tournament appearances. In hockey-mad Hermantown, Plante casts as big a shadow as any public figure.

Plante makes no apologies for his personality. He describes himself as “old and cranky” comes off simply as an affable guy who speaks his mind.

“We’re pretty honest with them,” Plante said about his players. “There’s no pulling punches. We’ll call guys out of we have to.” 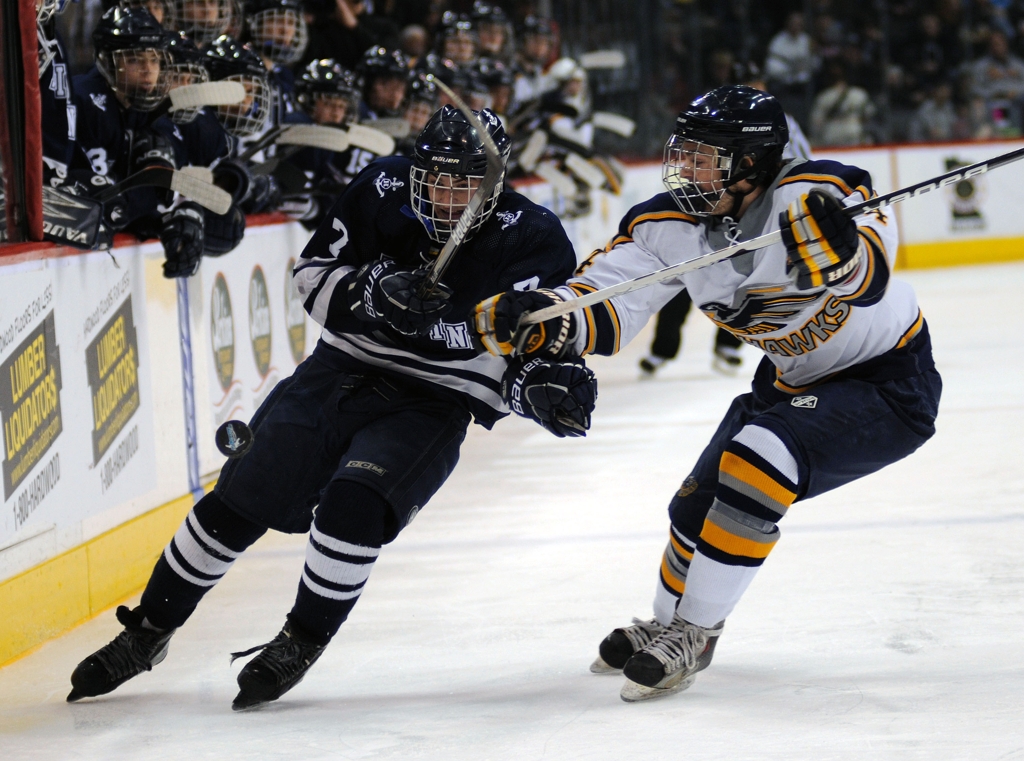 Hibbing/Chisholm's Adam Johnson (7) takes the puck the ice as he fights off Jake Zeleznikar (4). Photo by Jordan Doffing

“You hope that doesn’t happen, and you try to do … the little things correct,” Kolquist said. “Obviously guys tense up a little bit. But after that, you do what you’ve done all year.”

No. 2-seeded Hermantown (25-3-2) did just that, getting a tie-breaking goal from Andrew Mattson with 6:10 left and cementing things with Kolquist’s empty-netter for a 6-4 victory and a berth in the Class 1A title game for the second consecutive season.

Garrett Skrbich, who scored twice during the Hawks’ four-goal barrage in the second period after the Bluejackets (18-10-2) led 1-0 at the first intermission, was in the penalty box as Kolquist’s long-distance shot trickled into the net just before Johnson could bat it away.

“Just get there,” Skrbich said of his thoughts as he watched the puck eventually win the race. “I had to give the guy in the penalty box a hug, I was so excited.”

The northern rivals tied
2-2 when they met Feb. 18. This time, the Hawks slowed down Johnson after his scoring burst, restored order and got a timely goal from Mattson after a scramble in front.

“[Hermantown coach Bruce Plante] taught us to crash net,” Mattson said. “Sure enough, the rebound came to my stick and I batted away at it.”

The victory set up a showdown against No. 1-seeded St. Thomas Academy. The Hawks lost 2-1 to No. 1-seeded Breck a year ago in the title game on a late goal off a deflection. When asked about a potential opponent before the final was set, Plante gave folks in the interview room a good laugh: “I can’t tell you the truth, so I’ll tell you something else,” he said.

Said Kolquist: “We want it bad. We had an unfortunate break last year … and we want to come up on the winning side.”

1. Adam Johnson, Hibbing
In what was the most electric individual performance of the tournament (either class) so far, Johnson scored twice in the second period and added a goal early in the third, singlehandedly rallying the Bluejackets from a 4-1 deficit. His quick feet and lighting hands were a deadly combination for the Hawks, who struggled to get a body on the sophomore who now has 42 goals this season.

2. Garrett Skrbich, Hermantown
The senior do-it-all forward scored twice in the second period and added an assist in the third on Andrew Mattson’s game-winning goal. He had a team-high eight shots and won 20 of 35 face-offs.

3. Jared Kohlquist, Hermantown
The smooth-skating junior defenseman turned in another standout performance, finishing with a team high plus/minus rating of plus 6. He also had three quality hits and three blocked shots.