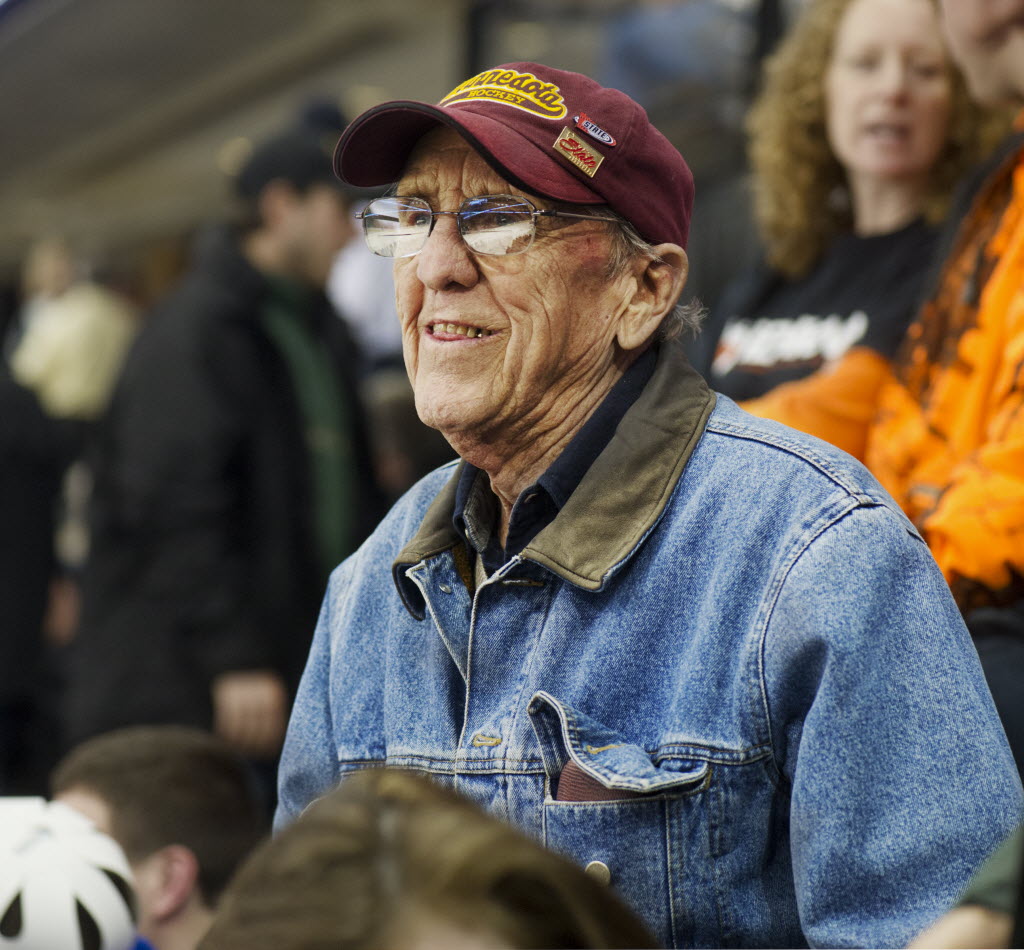 For 65 years Bill Murray has not missed a single high school hockey tournament. He grew up on the eastside of St.Paul and has attended every year since 1945, the start of the tournament. David Brewster, Star Tribune

Thursday, Bill Murray was in his usual place: at the boys’ state Class AA quarterfinals, in his seats near center ice at Xcel Energy Center, surrounded by the friends who delight in seeing him for one weekend a year. Murray, 88, has attended the boys’ state hockey tournament every year since it began in 1945. Ask him why, and he seems almost incredulous that he has to explain it.

“It’s a good brand of hockey, and it always has been," said Murray, a longtime resident of St. Paul’s East Side who now lives in North Branch. “I wouldn’t miss it. I’ll be coming as long as I’m able."

A crowd of 17,625 poured into the arena for Thursday’s early session, in which Edina and Duluth East — already deeply ingrained in tournament history — advanced to today’s semifinals. As they flooded out into downtown St. Paul, another 15,240 packed the evening session of an event that has been part of Minnesota’s fabric for 67 years.

Kemp traveled from Missouri to attend this year’s tournament, soaking up a father-daughter experience like no other. Lexy Luecke, a senior at White Bear Lake, came for the first time after wondering whether her school would make the field before she graduated. Jens Munson took a day off from work to be part of a six-family, 15-kid party in Suite 41.

Like Murray, they didn’t gush over the rites of spring in a frozen land or the sport’s place in Minnesota’s collective psyche. Those proclamations are for the poets and anthropologists. They were there because there is simply no other event so exhilarating, heartbreaking and memorable year after year, in both its small moments and its grander ones.

“I tell you what," said Edina coach Curt Giles, who first came under the tournament’s spell when he played at Minnesota Duluth and then for the North Stars. “You talk to anybody who has played at the highest levels anywhere in the world, and this tournament is something special.

“People say it all the time. People hear it all the time. But I’ll tell you what, when you are standing on the bench and watching the kids go, it’s a special time. It doesn’t matter how many times you go, it’s just a wonderful time."

Edina’s 3-2 victory over Blaine made for a lively party among the Hornets fans in Suite 41. As the younger kids gathered over nachos in the back, the grown-ups and teens kept their eyes on the games. While Munson asked for the day off a few weeks ago, another guest was trying to remain inconspicuous, since his boss didn’t know where he was.

Some of the kids had an easier time getting away. Munson said the principal of Edina’s South View Middle School sent an e-mail acknowledging that many kids would not show up Thursday; if their parents called ahead, there would be no questions.

Luecke said she couldn’t imagine anyone was left at White Bear Lake Area High School. Hundreds of her fellow students swarmed Xcel in their blaze orange clothing, standing elbow to elbow throughout their team’s 4-3 double-overtime loss to Duluth East. “The principal is here somewhere, and some of the teachers are, too,’’ she said. “I don’t know what anyone is doing at school today.’’

The Bears hadn’t made the state tournament since 2005, before Luecke started high school. When they beat rival Hill-Murray in the Section 4AA final, she was not going to miss out on her only chance to cheer her team at state. “I’m ecstatic," she said, with her orange glitter eyeshadow glowing. “This is something I’ll remember for a long time."

Outside the arena Thursday, the rhythms of life hummed along as usual. The crowd marching for Tibetan freedom at the state capital and the handful of men engaged in a lively discussion near the Dorothy Day Center didn’t seem to notice the throngs in their school colors.

Inside, where the rhythms of hockey rule, Bill Murray sat in his usual seat. Curt Giles calmed the latest crop of young players overwhelmed by their first state tournament experience. And Jens Munson took it all in yet again, an annual ritual that never grows old.

“I’ve been coming for years, and I’ve only missed a few here and there," Munson said. “It’s just tradition. It’s the place to be. I would have been here even if we got 50 inches of snow."