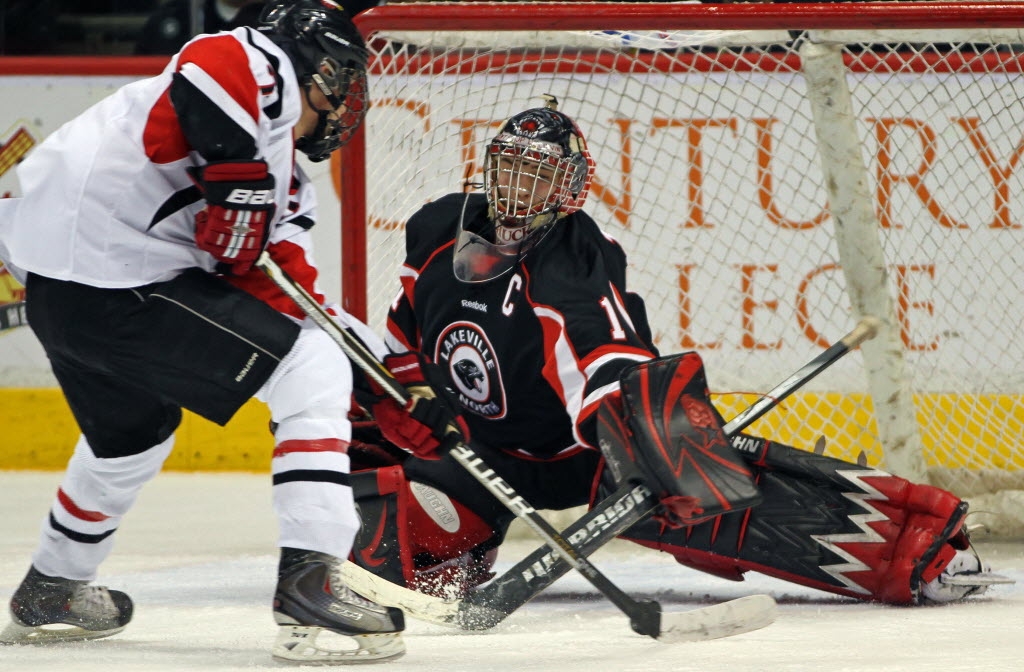 Eden Prairie coach Lee Smith said he started getting nostalgic when this year’s seniors — a group that has made a huge varsity impact for the past three seasons — had their last practice at the team’s home rink this past week.

Lakeville North coach Randy Schmitz, who has seen those talented players for all of those seasons as well, is a little less nostalgic.

“Everybody needs to move on and graduate,” he said with a laugh, after the Eagles seniors led a 5-0 victory over Schmitz’s Panthers in Thursday’s Class 2A quarterfinals.

The talented crew led by Kyle Rau still has two more games together. As sophomores, they were precocious enough to team with senior Nick Leddy to deliver Eden Prairie’s first boys’ hockey state championship. Rau had two goals in that tournament; he had two more goals Thursday, giving him 38 on the season.

“There are 10 of us on this team that have been playing since Squirts,” Rau said. “It definitely is different this year. We don’t have two more years with each other. This is it.”

As juniors, they missed the state tournament after falling to Minnetonka in the section playoffs. Now they’re back for more — and knowing what it’s like to play on the big stage of Xcel Energy Center certainly has its pluses.

“I think from the drop of the puck it’s been totally different. We have a lot more confidence now,” senior defenseman Dan Molenaar said. “As sophomores, we hit the ice in awe. … We’re kind of in reverse roles now.”

Indeed. The 13 seniors on the roster set the tone, while sophomore Andrew Knudsen, who had only two goals all season coming in, scored a huge goal early in the second period Thursday for a 2-0 lead.

Having such a senior-dominated team also means shoring up holes is easier. Eden Prairie’s list of regular-season results might make a person wonder if the Eagles were interested in defense. Three examples: They won two games 9-5 and another 8-5 despite having a deep and talented group of blueliners.

Through four section and state tournament games, though, Eden Prairie has allowed only four goals.

“That’s been a big focus of the playoffs for us,” Molenaar said. “Throughout the season we’ve given up a lot of goals and relied on offense to pick up the slack.”

If that sounds pretty smart, it translates in the classroom as well. Eden Prairie is the two-time defending academic state champion and carries a team grade-point average of 3.85 this year, Smith said. When they’re not deep in books or on the ice, players are often at Rau’s house “until the wee hours” on weekends, he said, even if it drives his parents crazy.

“They’re close, they’re easy to travel with … they’re loose and they’re confident,” Smith said. “And they show up whenever they have to.”

If they do it two more times, Smith’s dream senior class will cap a dream season.