'Hounds take sting out of Edina 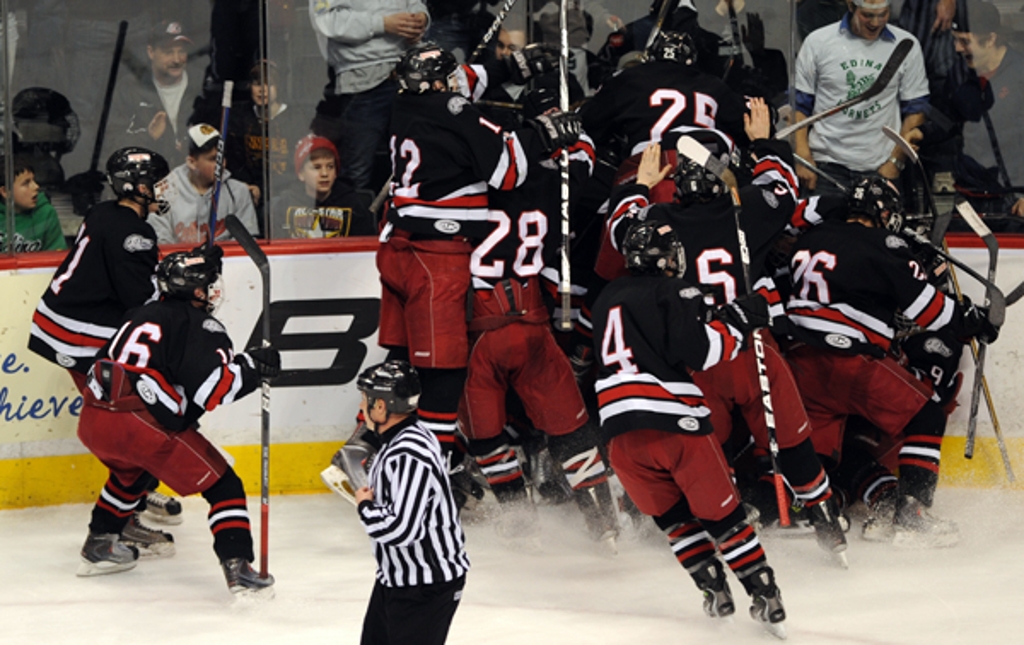 Alex Toscano is at the bottom of the Greyhounds' "dog" pile after he scored the game-winner in overtime of the Class AA state semifinal Friday night (Photo by Helen Nelson). 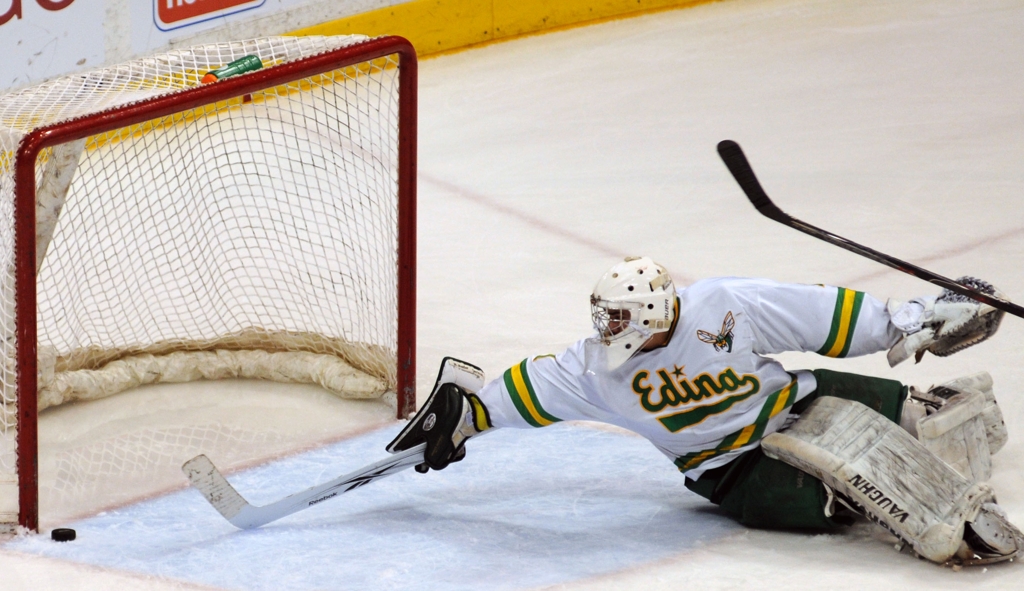 Edina goalie Connor Girard (1) dives for the puck right before it hits the pipe and stays out of the net. Photo by Jordan Doffing 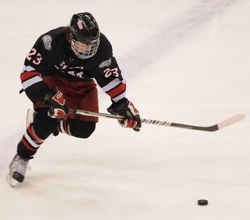 Alex Toscano had never scored a bigger goal in his life.

The sophomore wing’s seeing-eye goal 3 minutes, 54 seconds into overtime sent third-seeded Duluth East past Edina 2-1 and into the Class 2A state championship game for the first time in 11 years -- and knocked out the defending champion Hornets.

Midway through the first overtime of the state semifinal against second-seeded Edina, the Greyhounds’ Zac Schendel flipped the puck out of his own zone as East changed lines. Toscano, who was cruising center ice, picked up the puck and skated into the Hornets’ zone on a seemingly harmless 1-on-2.

“We were on the change and I just called for a chippy,” explained Toscano. “I was just going to shoot it and get off the ice.

Instead, Toscano closed to the top of the circle and lined up Hornets’ defenseman Hayden Anderson as a screen. He curled the puck to his forehand and unleashed a hard snapper.

Edina goaltender Connor Girard, who had been gobbling up every Duluth East chance for more than 55 minutes, was in perfect position. Yet somehow, the shot slipped his blocker and into the far corner.

Toscano had his big goal. And the Greyhounds had the upset victory.

Steven Fogarty gave the Hornets a lead midway through the second period. Jake Randolph tied it with just 41 seconds left in the second. Girard and East goaltender JoJo Jeanetta each made 19 saves. 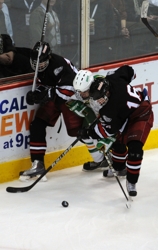 Duluth East's Jake Randolph (16) and Dom Totinato (19) sandwhich an Edina player to get to the puck. Photo by Jordan Doffing

With the victory over Edina (19-8-2), the Greyhounds (24-5-0) move on to the Class AA final at 7 p.m. Saturday night at the Xcel Energy Center, St. Paul. East will play the winner of the second semifinal between top-seeded Eden Prairie and Eagan.

The Greyhounds have been the cardiac kids throughout their playoff run, as beginning with the Section 7AA final against Grand Rapids, the last three victories have all come in overtime. Yet they seem to feed off the tension.

Longtime Duluth East coach Mike Randolph, who has won previous state titles in 1995 and 1998, talked to his team about making memories between the first and second period of Friday night’s semifinal.

“Go play,” Randolph told his team. “Don’t regret anything at the end of the game. Don’t look back and say ‘I wish I would have done this or that.’ Go do it.”

Randolph grinned as he relayed the story during the post-game press conference. He clearly has a special bond with this year’s edition of the Greyhounds, many of whom played youth hockey with Randolph’s son, junior Jake Randolph.

Randolph knows what it feels like to be the last team standing, to end the season knowing you are the best – and he’d love nothing more than to have these kids celebrate that moment.

Jake Randolph agreed. “It would be unbelievable to finish this off.” 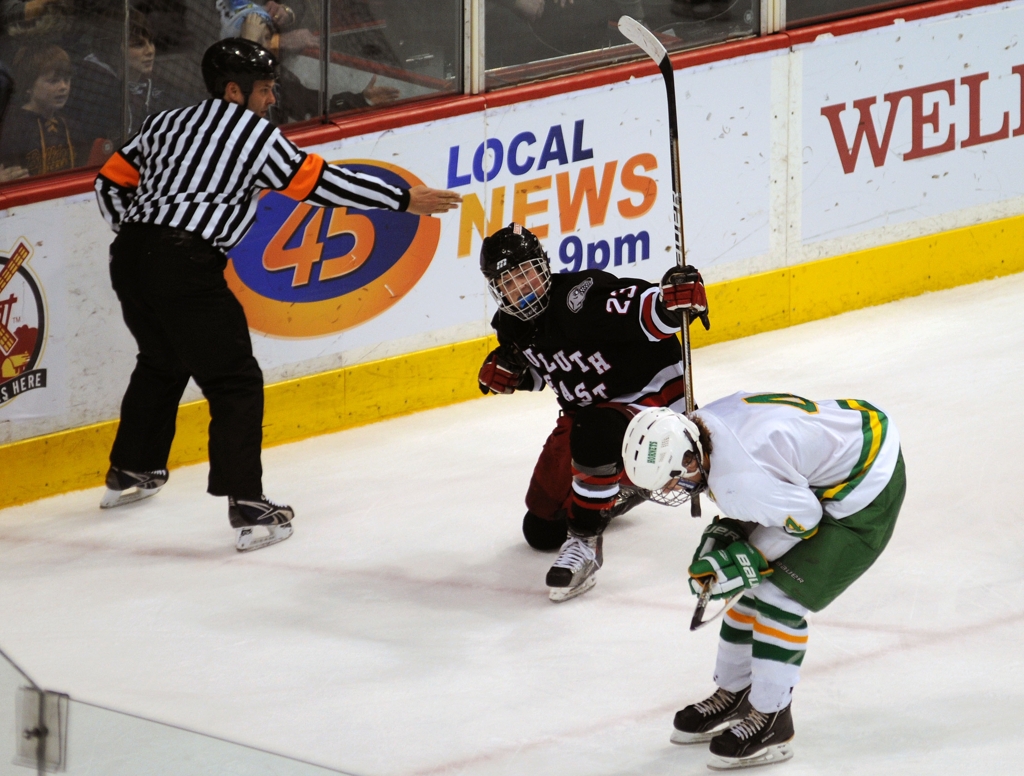 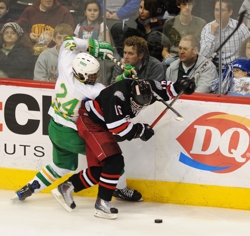 Living on the edge is nothing new for Duluth East.

Through the section playoffs and the first two games of the Class 2A state tournament, the Greyhounds haven’t been fazed by having to work through pressure situations.

They’ve thrived through them.

Three consecutive overtime postseason games have gone in the Greyhounds' favor, starting with a 2-1 win against Grand Rapids in the Section 7AA finals. Duluth East beat White Bear Lake 4-3 in the Class 2A quarterfinals. The most recent overtime triumph came in the form of a 2-1 state semifinal win against Edina.

Putting in the extra time has put the Greyhounds in the state championship game on Saturday, March 12 at the Xcel Energy Center in St. Paul.

“Unreal,” Greyhounds forward Jake Randolph said. “I can’t describe it. We got one more and I can’t wait.”

The levels of excitement have been extreme for the Greyhounds, but one constant has been the calming influence of senior goaltender JoJo Jeanetta, who made 19 saves against Edina in the Class 2A semifinals.

Jeanetta absorbed some valuable advice during the summer, equipping himself for his final run at a state title after three straight state tournament appearances.

“I remember during the summer, I work at a golf course and during a tournament, I remember hearing one of the golfers saying, ‘I wish I knew what it was like to have nerves,’ ” Jeanetta said. “That kind of stuck with me. I just try to be like that.”

It has worked well for him this season, as he brings an 18-4-0 record into the state championship game and has only allowed six goals in five postseason games.

Amidst all the celebrations after overtime goals by Trevor Olson, Zac Schendel and Alex Toscano, there is one more thing to be excited about.

Duluth East coach Mike Randolph led the Greyhounds to Class 2A titles in 1995 and 1998, so he knows there is more to anticipate.

“There’s one thing that’s really exciting. The 3-4 minutes after you win the title,” he said. “You guys think this is exciting. This isn’t even close if you finish this. So we’ll talk about that tomorrow during our skate.”

Through its run to the state title game, Duluth East a study in poise, surprising for a team with only six seniors.

“Hey, we’ve won three overtime games in a row,” Mike Randolph said. “The character these guys have shown is unbelievable.”

Duluth East will get one of the state’s elite teams in the finals, and if it turns out to be another tight one at the end, the Greyhounds have proven they can handle whatever is thrown at them. 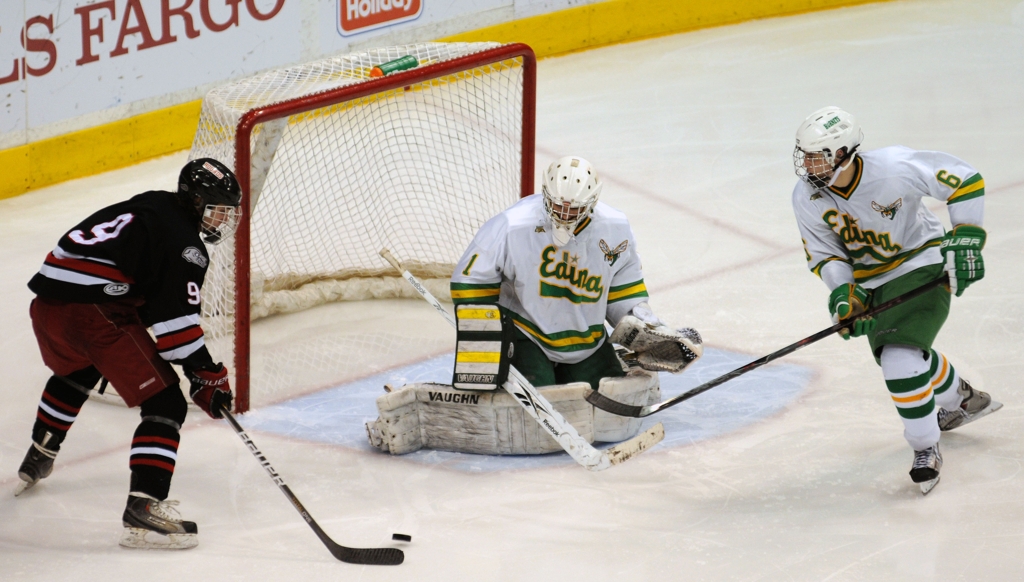 Duluth East's Zac Schendel (9) tries to put the bouncing puck into the net during the overtime period. Photo by Jordan Doffing 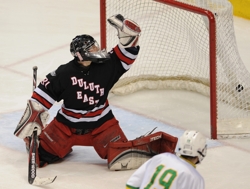 Goaltender Connor Girard stood stunned and Mr. Hockey finalists Steven Fogarty and Max Everson mirrored each other -- kneeling on the ice in shock.

Duluth East's 2-1 upset victory in overtime over defending Class 2A champion Edina left the Hornets’ seniors motionless as the teams lined up to shake hands after their state semifinal matchup at the Xcel Energy Center in St. Paul.

Even with the loss, Edina coach Curt Giles couldn't find fault with his upperclassmen.

“They’ve given us a great effort all year,” Giles said. “They’re quality kids, they’re quality athletes, good hockey players and they best thing about them is they’re wonderful kids.

“They’ve given us 100 percent for the last three, four years -- I got no qualms about any of that. Great leadership, great kids and great hockey players.”

Girard, in particular, took significant time gathering himself. He was among the first players Giles comforted on the ice. 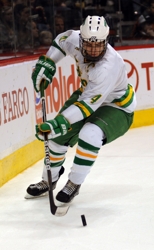 “He’s played great for us all year,” Giles said. “There’s no question about it. I got no complaints about our goaltending. To be honest, I don’t have any complaints about anything. He played extremely well all year for us, he’s the backbone of our team, he got us this far and I think he did a great job.”

Edina shifts its focus to the Class 2A third-place game on Saturday, March 12 against the loser of the semifinal between Eagan and Eden Prairie.

“We’ll finish our game, our year and play hard tomorrow and then we’ll go from there,” Giles said. “It will be a new year, next year. We lose a lot of quality kids, a lot of quality leadership but we’ll take a run at it again.”

Giles had no problems admitting he would miss his seniors next season.

“(I’ll miss) each and every one of them for different reasons,” Giles said. “What’s really fun is you get to know the kids a little bit, you know their personalities and what they bring to the table – on and off the ice. 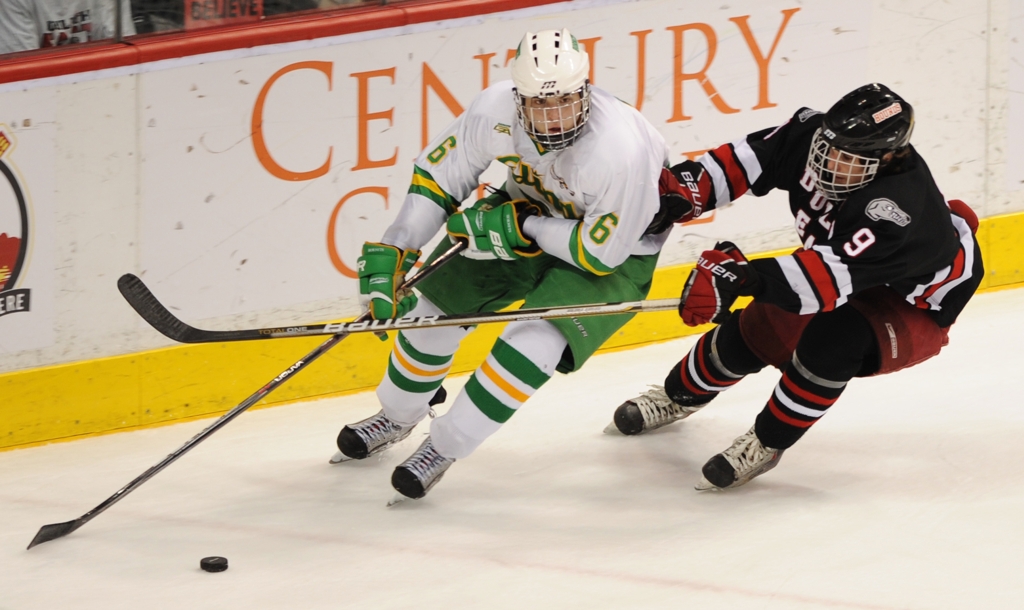 Alex Toscano was asked if he’d ever scored a bigger goal in his life than Friday’s overtime winner that sent Duluth East past Edina 2-1 and into Friday’s Class 2A title game.

He kind of smiled.

“I’ve never really scored a big goal,” said Toscano, a sophomore who entered the state tournament with three goals on the season.

It’s been that kind of charmed run for the third-seeded Greyhounds, who have now gone past regulation in three consecutive games — a section final OT win over Grand Rapids after a late goal to tie, a double overtime thriller over White Bear Lake in the state quarterfinals Thursday, and now Toscano’s winner at 3:54 of overtime that upended the

“It’s hard to be disappointed,” Edina head coach Curt Giles said. “You’re always disappointed to lose a game like that, but our guys worked hard start to finish. …

They played hard all year.”

The Greyhounds advanced to Saturday’s title game, their first appearance in the championship game since 2000. They are seeking their first title since 1998.

After a cautious and scoreless first period, Duluth East had three golden chances midway through the second period — the last a shot off the crossbar — but couldn’t cash any in for the game’s first goal. Edina took that honor two minutes later when Steven Fogarty used a burst to create a 2-on-1, skated down the right wing and buried a wrist shot high to the glove side.

Duluth East drew even with less than a minute left in the second when a relentless cycling forecheck eventually led to a one-timer from Jake Randolph.

The teams traded chances in the third period, with Duluth East putting one off the post and Edina’s Jake Sampson getting denied from close-range with four minutes remaining in regulation. The Greyhounds stepped up their attack in overtime, leading to Toscano beating Edina goalie Connor Girard clean under his blocker arm through a screen.

Between the first and second period … we talked about how the state of Minnesota hadn’t seen our game. If we lose, we lose. But let’s go play our game,” Duluth East coach Mike Randolph said. “That’s who we are. Don’t regret. Don’t say, 'I wish I had done this.’ ”

It’s safe to say Toscano has no regrets.

“It’s the best feeling in the world right now,” he said.

1. Alex Toscano, Duluth East
The sophomore forward hadn’t scored a goal since early February, so you could say it was highly unlikely that he would be the one to vault the Greyhounds past Edina in overtime. Or you could say he was due. Toscano’s goal 3:54 into the extra period was his fourth of the season.

2. JoJo Jeanetta, Duluth East
The senior made nine of his 19 saves in the overtime period and, although not tested often, did have to make the occasional spectacular stop. Jeanetta has won three straight overtime games and has been unfazed by playoff pressure.

3. Connor Girard, Edina
The Hornets’ senior goaltender, who was 10-0 in the playoffs, made 17 saves and, like Jeanetta, wasn’t tested often but did stop a handful of high-quality chances. The loss snapped Girard's 10-game unbeaten streak in the playoffs.