This wasn’t a reenactment of Babe Ruth calling his shot.

But it was eerie bit of prognostication all the same.

Section 4A/AA coach Phil Housley was contemplating the coming sudden-death overtime period in the Ted Brill Great 8 championship game against Section 8A/AA when he had something of a premonition.

“It was funny, I was talking on the bench and I said, ‘Bennie, you are going to get this one, and it is going to be a rebound,’ ” said Housley, the former all-star NHL defenseman who is the head coach at Stillwater. “And it’s funny that it worked out that way. (Co-Section 4 coach Joe Dziedzic) and I were laughing about that.” 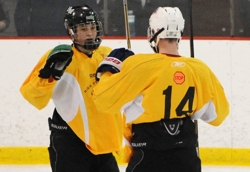 “Bennie” would be Ben Bahe, a forward who led Hill-Murray in scoring during the regular season. Sure enough, Bahe needed only to deposit a rebound into an empty net with 2 minutes, 2 seconds left in overtime to give Section 4 the 4-3 victory on Sunday, April 4, at Wakota Arena in South St. Paul.

The Great 8 championship was the second in as many years for Section 4, and the overtime period served as wildly entertaining conclusion to the three-day, eight-team tournament featuring many of the state’s best seniors.

Section 8 had seven shots in the overtime, including breakaway chances by Mason Fussy and Josh Archibald, both of Brainerd.

“I didn’t really see the breakaways develop that much, so I didn’t have that much time to get out there,” Shaughnessy said. “I just kind of played them as they came.”

The last time Bahe and Shaughnessy were playing in a game that mattered, the overtime ending might as well have been penned by Shakespeare. 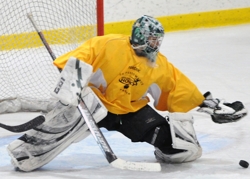 Hill-Murray's Tim Shaughnessy makes a save in overtime for Section 4 in the Ted Brill Great 8 championship game. Photo by Helen Nelson

For Bahe and Shaughnessy and the rest of the then No. 1-ranked Pioneers, the final scene of their loss to White Bear Lake in the Section 4AA championship was pure tragedy. After the final goal, distraught Pioneers players were sprawled on the ice in a hodgepodge of poses. Tears were abundant in that tragedy.

The Great 8 championship game never has been confused with a section final showdown. Instead of playing in front of 5,000 fans at the State Fairgrounds Coliseum, there were about 500 at Wakota Arena on Sunday.

It was Bahe, at the insistence of his teammates, who reluctantly skated over to the penalty box area during the postgame awards ceremony to receive the massive silver trophy giving to the Great 8 championship.

“He got the game winner, so we sent him over,” Shaughnessy said. “He deserved it.”

Ben Bahe of Hill-Murray scored on a power play with 2 minutes, 2 seconds left in overtime to lift Section 4A/AA past section 8A/AA 4-3 in the championship game of the Ted Brill Great 8 tournament on Sunday, April 3, at Wakota Arena in South St. Paul.

The title game victory was the second straight for Section 4.

Bahe popped a rebound into an open net to end an overtime period that saw Section 4 goaltender Tim Shaughnessy, another Hill-Murray standout, stop breakaway attempts by Section 8’s Mason Fussy and Josh Archibald, both of Brainerd.

Thief River Falls’ Micah Ranum, who sprung both Fussy and Archibald loose on their breakaways with long centering passes, scored with 3:25 left in the third period to force the 10-minute overtime session.

Archibald scored in the first period and Andrew Jahnke of Red Lake Falls scored in the second to give Section 8 a 2-0 lead. Section 4 rallied to take a 3-2 lead on second-period goals by A.J. Reid of St. Thomas Academy, Brandon Wahlin of White Bear Lake and Kyle Mogren of Stillwater.

1. Ben Bahe, Section 4
Hill-Murray’s Bahe scored the winner in overtime, slamming the puck into an open net off a rebound, just the way Section 4 coach Phil Housley of Stillwater had, a few minutes earlier, predicted how the game would end. During the awards ceremony, Bahe was chosen by his teammates to skate to the penalty box and receive the massive silver chalice given to the tournament’s champion.

2. Tim Shaughnessy, Section 4
Shaughnessy, also of Hill-Murray, turned in the very definition of a clutch performance, stopping two breakaways in overtime. He had 20 saves on 21 shots.