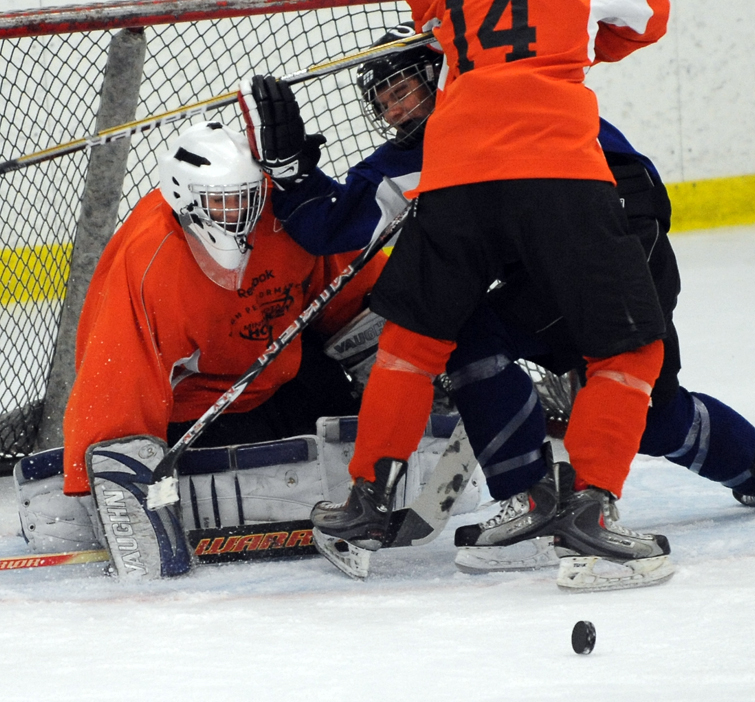 Strapped into his goalie skates, Amsden transforms into a one-man skyscraper.

Amsden’s Section 1A/AA teammates took to calling him “Too Tall” during the Reebok High Performance 17 Spring Festival. Not the most original of nicknames, but a sure sign the sophomore from Le Sueur-Henderson/St. Peter had earned a measure of respect.

“He stands tall in the net, he has good fundamentals, his hands are in the right spot,” Section 1 coach Brad Ryan said about Amsden after beating Section 4A/AA 6-5 in overtime to win the all-star event on Sunday, April 10, at the Plymouth Ice Center. “He controls the puck on a regular basis, which is huge when you are playing hockey at this level. You can’t be giving up those rebounds.

“But most importantly he’s just a quality kid. And every one of those 19 guys that are in the locker room like to be around him.”

Amsden made 12 saves for Section 1 after entering to begin the second 24-minute half. Two of Amsden’s stops came in the overtime session as Section 1 avenged a 2-1 loss to Section 4 when many of the players on the two rosters – including Amsden -- clashed last year in the 16s title game.

“It’s a lot of fun,” Amsden said about the High Performance experience. “There’s a lot of good competition out here. Everyone is getting better, battling. Just working on improving our games, that’s the main thing.”

Amsden played all 27 games for the Bulldogs last winter, when he posted a .912 save percentage and 3.32 goals-against average. Great numbers for a guy on a team that went 12-13-2, losing 11-0 to Rochester Lourdes in the Section 1A quarterfinals.

“He’s the backbone of that hockey team down there,” said Ryan, the head coach at Faribault.

Ryan’s Falcons unloaded 51 shots on Amsden yet managed only a 3-2 win over the Bulldogs in the regular season finale last season.

Amsden, remarkably quick and agile for his size, made all manner of spectacular saves against Section 4 in the 17s title game.

“It’s a lot quicker pace,” Amsden said in comparing the all-star event to the high school season. “There’s a lot more stickhandling and a lot better shots. They are moving the puck a lot better. Tape to tape.”

Some of Amsden’s best saves came against players from the state’s top programs. Section 4 was stocked with stars from Hill-Murray and St. Thomas Academy, two of perennial private-school powerhouses.

“I grew up in Faribault, when it comes to levels like this nobody is going to give you the benefit of the doubt,” Ryan said. “You’ve got to go out there and earn it. You only get a few minutes to shine. He’s up here and he’s got two, three halves to play hockey. He’s got to impress people who have been around this game for an awful long time. He made the best of the time he had.

“I’m pretty proud of that kid.” 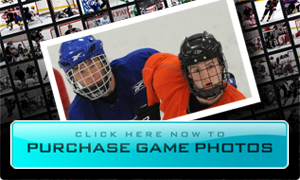 Vesel, of Shattuck-St. Mary's, ripped a shot high over the catching glove of Section 4 goaltender Rory Davidowski of Totino-Grace to secure the title.

The two section teams met last year in the High Performance 16s championship, when Section 4 won the title. Many of the same players were on the teams' rosters in the rematch.

The speedy Vesel finished with a goal and assist while playing on a standout forward line that also included Rochester Lourdes’ Alex Funk and Lakeville North’s Blake Winiecki.

Geroge Spichal of North St. Paul had a goal and an assist for Section 4, and defenseman Jonah Johnson of Hill-Murray forced the overtime when his shot from the point was deflected and trickled past Section 1 goaltender Chris Amsden of Le Sueur-Henderson/St. Peter to tie the score at 5.

Amsden stopped 12 of 14 shots in the second 24-minute half and overtime to earn the victory.

1. Tyler Vesel, Section 1
Vesel, who plays for Shattuck-St. Mary’s, scored on a breakaway just more than 2 minutes into the overtime period, firing a high, hard shot into the upper right corner of the goal. He also opened the scoring for Section 1 in the first half and added an assist.

2. Chris Amsden, Section 1
The big, agile goaltender from Le Sueur/Henderson-St. Peter made 10 saves in the second 24-minute half and was credited with two more in the overtime period.

3. George Spichal, Section 4
The North St. Paul forward had a goal and an assist and was a big part of the high-revving, highly effective forward line that also included Michael Fabie of Minnehaha Academy and Jacob Jackson of Tartan.