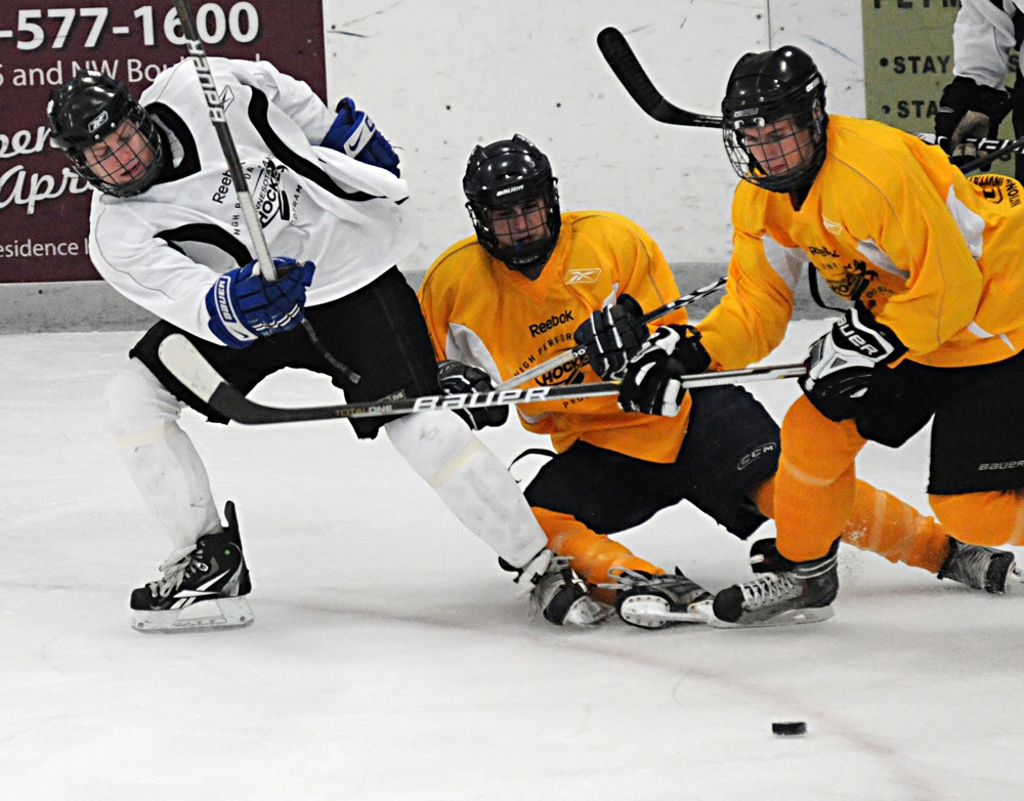 Tony Barbato and Bob Kinne couldn’t have been more than a couple of feet from each other when they walked off Rink A at the Plymouth Ice Center after what was most likely their final game as hockey teammates.

First Kinne, then right behind, Barbato.

Or was it Barbato and then Kinne?

No matter, these guys have been inseparable for years as the twin lynchpins of Cretin-Derham Hall’s offense. Before that, they skated on the same line as St. Paul kids going through Squirts, Pee Wees and Bantams.

“It’s been like 12 or 13 years I think,” Barbato said about playing with his neighborhood buddy. “It’s been a lot of chemistry, which is awesome. It has been a great run.”

Kinne and Barbato each had a goal and assist on Sunday, April 17, to lead the Minnesota Senior All-Stars to a 5-1 victory over the Minnesota Under-18s in the championship game of the CCM Minnesota National Invitational Tournament.

After the awards ceremony, that side-by-side walk off the rink and a congratulatory speech in the locker room from coach Phil Housley, all that was left for Barbato and Kinne was to contemplate their futures.

Largely in part because of their standout performance in the Ted Brill Great 8, a senior all-stars tournament April 1-3 in which Barbato and Kinne combined for an astounding 18 points in three games, Kinne was offered a scholarship from Bemidji State University coach Tom Serratore.

“Actually, he kind of surprised me,” Kinne said. “He called me on a Friday and said he wanted to meet with me and my parents on a Sunday. He just came and visited me in my house. In my living room, I guess.

Kinne’s brother, Ben, plays for the Beavers, so there wasn’t a lot of getting-to-know-you time required for either side.

“I said yes right then.”

Ben suffered a stroke last summer while working out, but Bob said his brother recovered quickly and worked out all winter with the Beavers as a medical redshirt. Ben will have two seasons of eligibility.

That means its possible Bob and Ben could be teammates, although Bob will play one and possibly two years of junior hockey before joining the Beavers.

“I’ll be pushing hard to get there (to play with Ben), but if not, it’s alright with me,” Kinne said.

It’s doubtful Kinne and Barbato will end up on the same junior team this fall, so the only hope of the two someday joining forces again would be at Bemidji State. The Beavers haven’t been in contact with Barbato, but who knows?

“That would great,” Barbato said. “It would be a dream to continue playing with him. I’d love that.”

Kinne had 53 points (22 goals, 31 assists) during the high school season. Barbato was close behind with 44 points (25 goals, 19 assists) as Cretin-Derham Hall went 14-9-4, losing to Apple Valley in the Section 3AA semifinals.

“Prior to the Great 8, I hadn’t really heard a lot about them,” Minnesota Seniors coach Elly Froiland said. “But they were really a pleasant surprise. As far as being coachable, they had great attitudes in the locker room. This is a lot of coach speak, but its true.

“They are both really positive kids.”

As members of the Raiders’ baseball team, it would make for a great story if Kinne and Barbato were a shortstop-second base combination using all that chemistry to turn double plays. Barbato does play shortstop but, alas, Kinne is stationed in left field when he isn’t nailing down games as a closer “bringing a little heat.”

On Sunday, it was Kinne, Barbato and linemate Nick Nielsen of Bloomington Jefferson scorching the U-18s defense with high-energy shift after high-energy shift. Kinne scored his goal by alertly banging a loose puck in the slot past goaltender Jared Schletty of White Bear Lake.

Barbato one-timed perfect pass from Nielsen through the high slot for his goal.

“The nice thing is they always go to the net hard,” Froiland said about Barbato and Kinne. “They never took a shift off. I would say of the four lines, they were the most consistent in all four games without a doubt.” 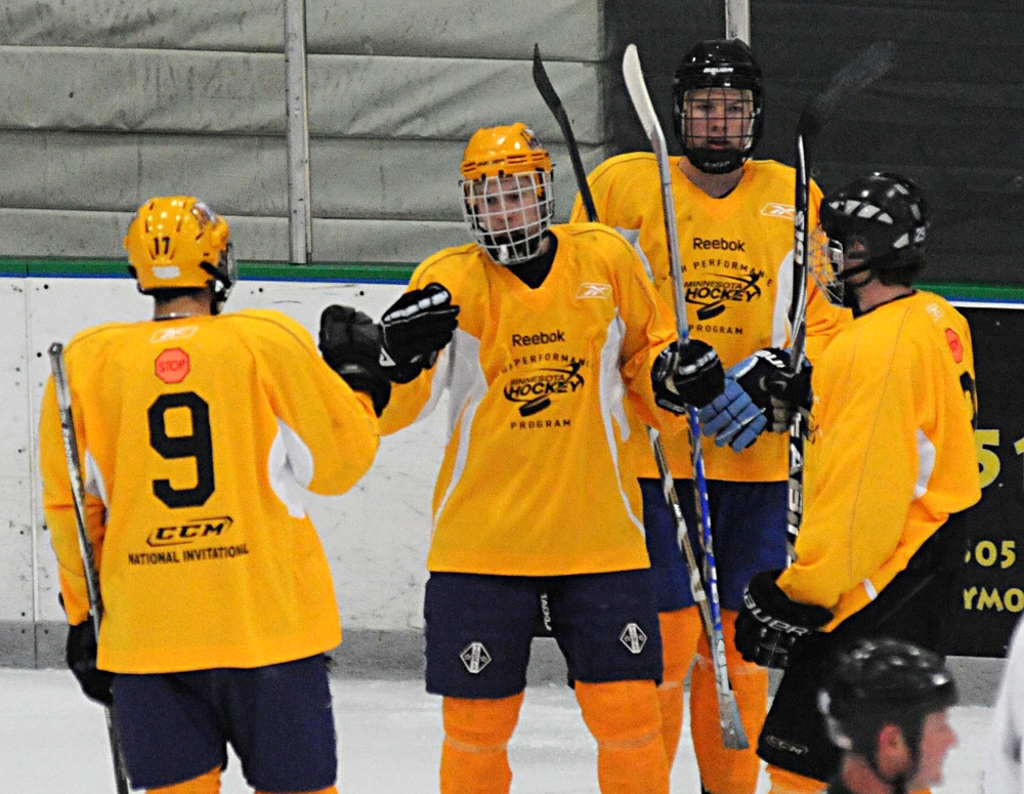 Longtime Cretin-Derham Hall linemates Bob Kinne and Tony Barbato each had a goal and an assist as the Minnesota Seniors All-Stars defeated the Minnesota U-18s 5-1 on Sunday, April 17, in the championship game of the CCM Minnesota National Invitational Tournament at the Plymouth Ice Center.

Kinne and Barbato each scored in the second period as the Minnesota Seniors turned a 1-0 advantage into a 3-0 bulge heading into the third.

Nick Lehr of Roseville stopped all 11 shots he faced in two periods of work to earn the victory.

The victory capped a dominating run through the tournament for the Minnesota Seniors, who rebounded from a preliminary round loss to Wisconsin by winning their next three games by a combined score of 14-3.

The victory for a Minnesota team was a first in the two-year history of the tournament. Wisconsin won the inaugural title last year.

1. Bob Kinne, Minnesota Seniors
The Cretin-Derham Hall standout and recent Bemidji State commit scored what proved to be the winning goal and added an assist, giving him four points in his last three Minnesota NIT Games.

2. Tony Barbato, Minnesota Seniors
It’s hard to mention Kinne without adding Cretin-Derham Hall’s Barbato in the same sentence, and we won’t bother to try. Barbato, who has been Kinne’s sidekick since the pair were squirts, also had a goal and assist.

3. Josh Archibald, Minnesota Seniors
Archibald had an assist, but he excelled more with a defensive game that showcased a commitment to backchecking and some great penalty killing skills. Archibald also dished out the hit of the game, a punishing check in the defensive zone on Maple Grove’s Spencer Bell.