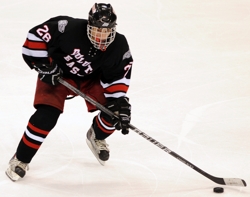 Benilde-St. Margaret's, Duluth East and Hill-Murray each have three players who will attend the USA Hockey National Player Development camps this summer in Rochester, N.Y., the most of any state high school league programs.

Forward Daniel Labosky of Benilde-St. Margaret's, forward Connor Valesano and goaltender Dylan Parker of Duluth East and defenseman Blake Heinrich and forward Luke Voltin of Hill-Murray are among the 19 players who will participate in the Select 16 camp June 24-30.

Forward Grant Besse and defenseman Jake Horton of Benilde-St. Margaret's, forward Jake Gunetzel of Hill-Murray and defenseman Meirs Moore of Duluth East are among the 14 players who will participate in the Select 17 camp July 7-13.

The number of Minnesota players advancing to the national camp in each age group is determined by USA Hockey.

Minnesota players were selected after two consecutive weekends of tournaments in Plymouth. After a series of tryouts, players were divided into eight teams based on Minnesota State High School League playoff sections.

The top 54 players from each of the two age groups were then selected to compete in a two-day round-robin event that concluded on April 25.

All selected players will receive information about the national camps from USA Hockey by e-mail.

Questions about the Select 17 selections can be addressed to Rick Lowe at 320-333-5696 or rickl@minnesotahockey.org.

Select 16 questions can be addressed to Mark Palmer at 612-325-8068 or markp@minnesotahockey.org.