See who was voted as the top performer for Dec. 4-9. 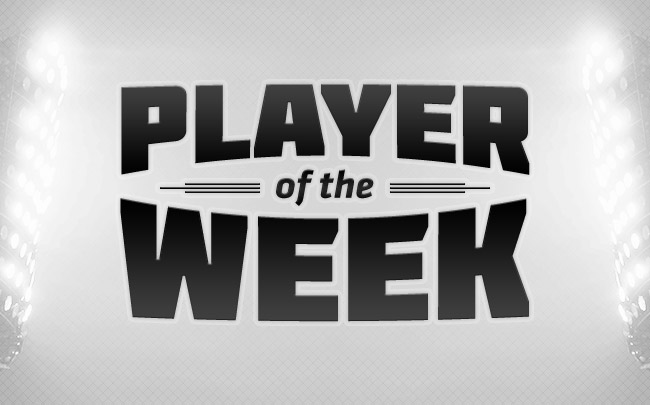 Player of the Week winner

Brady Gallahue, South St. Paul. The sophomore goalie was perfect in net, stopping all 36 shots against him — nearly half of them coming in the third period — in a 1-0 win over Mankato East.

Brady Gallahue, South St. Paul. The sophomore goalie was perfect in net, stopping all 36 shots against him — nearly half of them coming in the third period — in a 1-0 win over Mankato East.

Jacob Gielser, Providence Academy. With the Lions trailing 3-2 heading into the third period, the senior forward scored an even-strength goal and a power-play goal in less than two minutes to put his team ahead for good. Giesler also tallied two short-handed assists in the second period in just over a one-minute time span. The Lions defeated Minnehaha Academy 5-3.

Gabe Holum, Grand Rapids. The senior goaltender posted a .976 save percentage in 58:38 of playing time, stopping 40 shots in a 2-1 overtime win against Roseau.

Donte Lawson, Greenway. The junior forward had a hand in all five Raiders goals, scoring twice and adding three assists in a 5-3 win over East Grand Forks.

Huck Sorock, Minneapolis. Sorock assisted the overtime game-winning goal 40 seconds into the extra period to defeat Blake 5-4. The senior forward also assisted on a power-play goal in the second and scored on a power play in the third.

Brooks Telecky, Hutchinson. Despite Hutchinson’s 2-1 loss to Litchfield/Dassel-Cokato, the senior goaltender posted a .964 save percentage, stopping 54 of the 56 shots he faced.

Jonathan Terwisscha, River Lakes. The senior goalie led the Stars into overtime after making 40 saves in regulation. Terwisscha made seven more saves in overtime before allowing the winning goal as the Stars lost 3-2 to Alexandria.

Ben Unruh, Detroit Lakes. The senior forward led the Tigers’ offensive attack, notching a hat trick and adding five assists, in a 8-3 win over Prairie Centre. Four of Unruh’s eight points came on the power play, one while short-handed, and the remaining three at even strength.

John Witcraft, Chanhassen. The senior forward registered three points on special teams — a short-handed assist, a power-play goal, and a power-play assist — in the first period before assisting on Chanhassen’s winning goal with less than four minutes left in the third period in a 5-4 win over Rogers.

Joe Wolters, Farmington. The senior defenseman contributed four points — including an assist on the eventual game-winner and scoring an insurance goal in the third period — in a 5-3 win over Apple Valley.