Those seeking to livestream home games of the school’s highest-profile sports team must pay a $100 per-game fee, imposed to counter effects of an attendance drop. 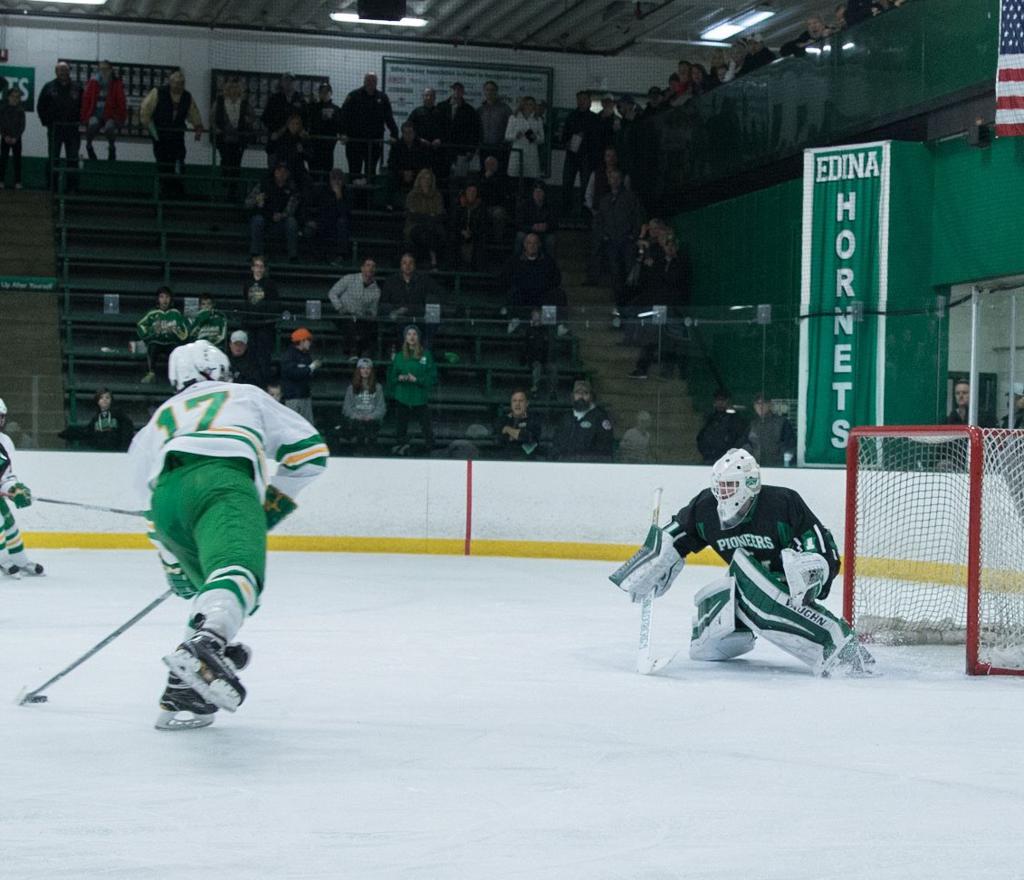 Edina's Ben Brinkman prepared to shoot the puck against the Hill-Murray goaltender in a game at Braemar Arena on Jan. 21, 2017.

The fee seeks to combat the effects of what Hornets activities director Troy Stein called a “downward trend of people not attending games” by requiring outlets to pay up if they want to transmit live video or audio coverage over the internet.

Edina, which began imposing the fee last season, is believed to be the only school in the state that requires a charge for livestreaming.

While other schools have sought to combat attendance declines by making games free for students to attend, Edina’s approach leaves ticket prices alone and instead charges those who make boys’ hockey home games available for fans to watch on computers and mobile devices.

The boys’ hockey program — the school’s most popular and marketable one — has won a record 12 state tournament championships. The Hornets, led by five players committed to Division I college programs, began this season ranked No. 1 in Class 2A.

“It’s another opportunity to generate revenue,” Stein said. “We have the option to take advantage of this versus asking parents and boosters.”

Edina collected $900 from the livestream fee last season, said Stein, adding this year has brought an additional $600 with two pending requests. The funds from what Stein calls a “pilot program” go to the general athletics fund.

“We’re inundated with requests to livestream games and with the popularity of mobile device use, people are choosing not to attend,” Stein said.

All of the games were livestreamed at stateofhockey.com. Producer Pete Waggoner said his site drew 2,500 to 3,000 viewers per game. He said e-mail feedback indicated “the majority are transplanted alumni. Most people who want to see the game are there.”

Stein said, “It’s hard to gauge if attendance was down due to streaming. I’m not an expert on marketing or its effects but I hear a lot, ‘I can watch it live on my device.’ Clearly, people are making a profit by streaming games and if people are choosing to stay home, we’re losing attendance and revenue.”

One outlet found the $100 to be an obstacle. Zach Halverson, founder of The Horn, which livestreams White Bear Lake boys’ hockey games, started a GoFundMe campaign so he could cover the Bears’ game Jan. 4 at Edina. In his post, Halverson, a White Bear Lake graduate and producer at KFAN 100.3, said The Horn was “a non-commercial, team sponsored entity.”

Waggoner, who considers Braemar Arena the best venue from which to livestream games, said the $100 fee “steered me away from doing more Edina home games. I have to be more selective from a business perspective.”

While Edina appears to be out front in charging a livestream fee for regular season games, it’s more common in the postseason. For example, Prepspotlight.tv has paid from $100 to $500 per game to livestream section final games in various sports in the last three years, company official Andy Price said.

Stein, in his fifth year at Edina, said he and other Lake Conference activities directors previously discussed livestreaming but took no action.

Charging outlets interested in livestreaming games, Stein said, also “allows for getting our arms around it and having some control over who is streaming.”

“At the high school level, there’s certainly a cap in terms of who the audience is,” Stein said. “So this helps the program. This is a small return on what we believe is a downward trend of people not attending games.”

“As an A.D. you ask, ‘How can we provide a service and have as many people see the game as possible yet generate the revenue we need to pay for the event?’ ” Madison said. “In the past at Mounds View, if there was a live-stream we really didn’t see a decrease in gate revenue because usually it was going to be a good game.”

Waggoner said, “If people want to crowd around a 4-by-6 screen to watch a game, they probably weren’t going to get in the car and drive to a game anyway.”