The Dragons remain unbeaten in conference play with a 2-1 victory over the Scots. 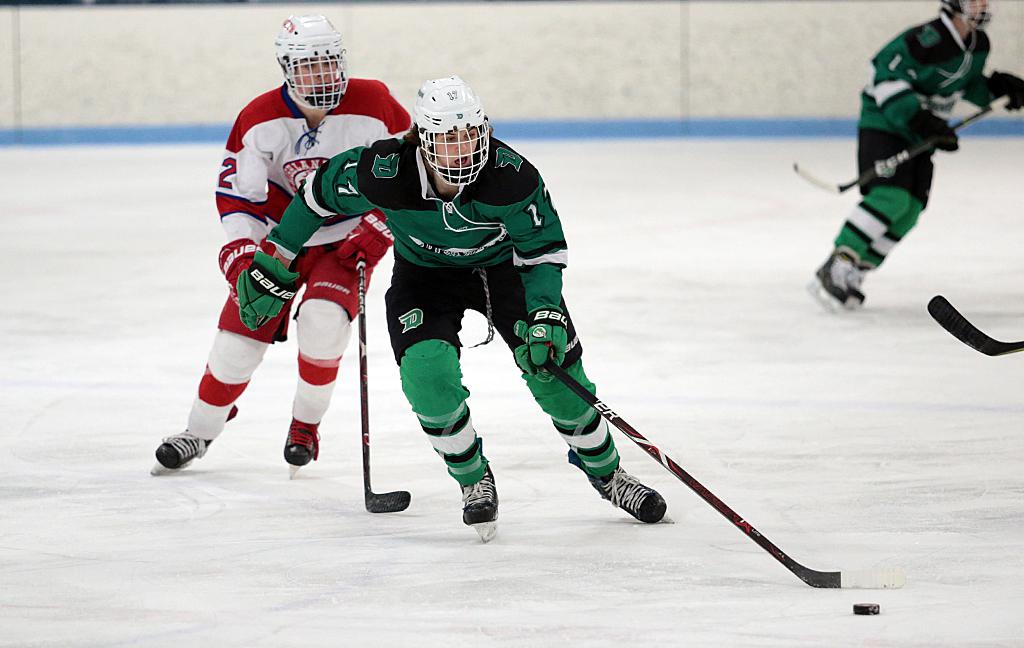 Jordan Stich (17) moves the puck into the neutral zone past Gabe Nelson (12). Stich scored the game winner in the third period as the Dragons rallied to a 2-1 victory and remain undefeated in conference play. Photo by Cheryl Myers, SportsEngine

Judging by the postgame reaction, Pine City was more than a little happy with its win Friday.

A string of whoops and hollers accompanied the Dragon boys' hockey team into the locker room following a 2-1 road win at St. Paul Highland Park. Not only was it a big come-from-behind win against a very good goaltender, it was an important step in getting the Dragons closer to a third straight Two Rivers Conference title.

That title would mean a lot to the Dragons. Making a deep playoff run would mean even more, and the win over the Scots was the kind of game that will help prepare Pine City for section play.

“I don’t think I’ve ever coached in this rink and not had a close, one-goal, come-from-behind, have to hold off in the third, some sort of tight win like that,” Pine City coach Grant Nicoll said. “It was a good character win for the boys to fight through a good goaltender and fight through many opportunities that were just flat-out missed.”

The Dragons (13-5, 6-0) couldn’t seem to overcome Scots' goaltender Jack Branby for the first two periods, as the Highland Park senior was especially impressive in stopping 12 shots in the second. Trailing 1-0 after two, Pine City's Dusty Bergstrom evened the game early in the third at 1-1, and Jordan Stich finished a slick sequence of passing for a go-ahead power-play goal with 7:06 left in the period.

Pine City beat Highland Park 3-1 earlier in the season -- essentially a 2-1 game with an empty-net goal. And the Dragons took the 2017 conference crown by one game over the Scots.

“It meant a lot,” Stich said. “We’ve been rivals for how long, it’s third year in a row we’ve beat them now.”

The Dragons hope some of Friday’s lesson sticks with them as the season continues. Pine City got 30 shots on goal, but only scored two, despite plenty of chances.

“We just kept pounding shots on net, getting guys in front of the net,” Stich said. “Coach told us before the game that we had to crash the net, get as many rebounds and dirty goals as we can. And it worked out in the end.”

“When you get into those section playoffs, you’re going to see hot goalies; you’re going to see guys as good as this Branby kid was tonight,” Nicoll said. “You’ve got to find a way to manufacture goals and get them moving side to side. Games like this help generate those things and help those boys visualize what needs to be done.”

The Dragons still have to shore up some of their defensive play, Nicoll said, and be sure to capitalize on chances. But on Friday, they tweaked their the power-play approach during the third period to counter a Highland Park (9-4, 3-2) team that was playing well on the penalty kill up to that point. The adjustments resulted in a goal.

And now, Pine City is perhaps one or two conference wins away from a third straight title. That’s no small feat for a team that was 5-19 as recently as 2014.

“Absolutely. It had been, oh my gosh, I think close to 15 years since Pine City had won a conference,” Nicoll said. “Now I think it’s one, maybe two wins away from securing this year’s conference championship. That would make it three years, back-to-back-to-back. That’s huge.”

The end goal is to make a playoff run, and the 13-5 Dragons have already absorbed some regular-season losses to potential section opponents. But the Dragons hope Friday’s win can fuel a big finish to the season.

“Hopefully it gives us a lot of confidence going into playoffs,” Stich said. 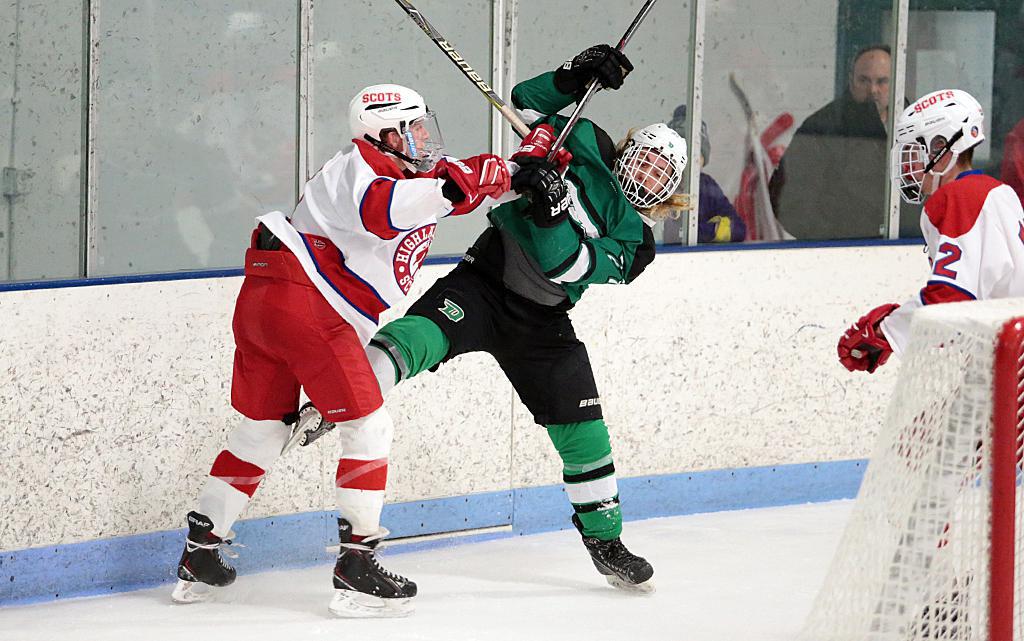 Pine City's Jan Zahradka (77) clashes behind the net with a Highland Park defender. A combined 28 minutes of penalties on 13 infractions were issued in the contest. Photo by Cheryl Myers, SportsEngine

It took some time, but Pine City finally beat a goaltender who befuddled them for two periods.

The Dragons won a 2-1 road game at St. Paul Highland Park Friday at Highland Arena, scoring twice in the third period to overcome an early deficit in a key Two Rivers Conference matchup. After Dusty Bergstrom tied the game at 2-2, Jordan Stich netted the game winner with 9:54 left on the clock.

Pine City (13-5, 6-0) struggled to open the third, despite having 3 minutes, 43 seconds of power play time to begin the period. Bergstrom later tied it on a shot from distance that snuck by Highland Park (9-4, 3-2) goaltender Jack Branby.

Highland Park's Billy Wengler opened the scoring on a long shot at 5:52 of the second period, giving the Scots a 1-0 lead.

With the win, the Dragons remain unbeaten in Two Rivers play, and snapped a Scots' six-game win streak. 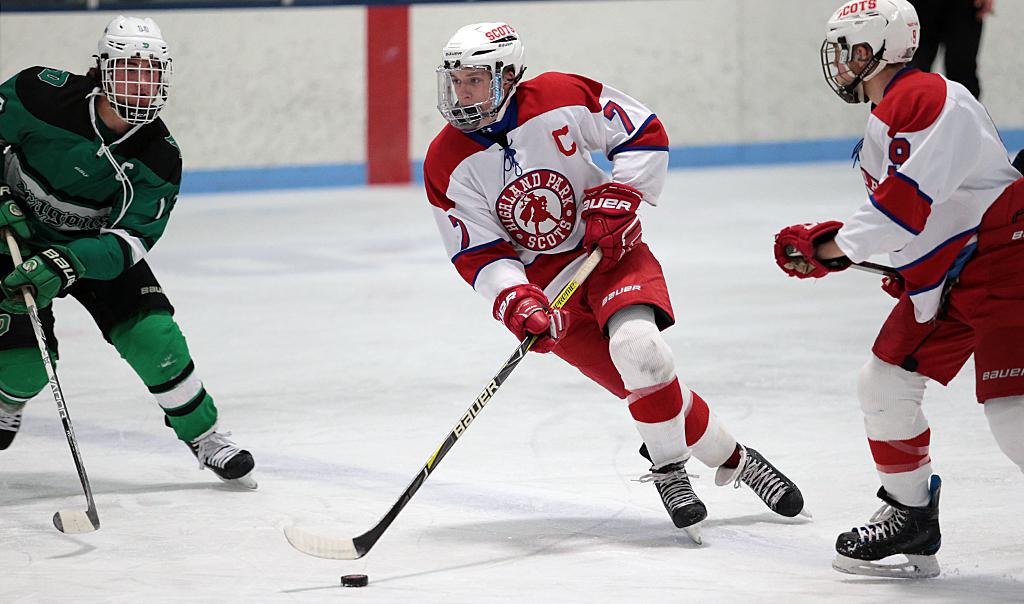 Billy Wengler (7) scored Highland Parks only goal in the second period as they fall 2-1 to conference leader Pine City on Friday night in St. Paul. Photo by Cheryl Myers, SportsEngine

The MN Hockey Hub polls are for entertainment purposes only.