“They call it the sports bra from hell,” Luedtke, an Orono senior, said about the contraption. “It definitely hindered me this season, especially at first with stickhandling. It took me a while to get used to it.”

By the end of last season, Luedtke and his shoulder brace were working together in an unfathomably successful goal-scoring harmony. 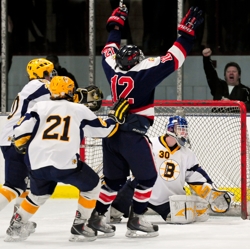 Luedtke, who recently committed to play at the Air Force Academy, registered hat tricks in three straight playoff games. His third goal in the  Section 2A championship game gave the Spartans a 3-1 third-period lead over Breck. Orono eventually lost to the Mustangs in overtime.

“I think we had our whole school there,” said Luedtke, who after the season underwent two surgeries to repair torn ligaments in his shoulder. “It was so much fun playing in that atmosphere. When I got that hat trick everyone was just going crazy.

“It really shows how special Minnesota hockey is, how fun those playoff games were.”

Luedtke had opened the playoffs with a hat trick in the Spartans’ 9-3 win over Providence Academy. Hat trick No. 2 came in the section semifinals in a 3-2 triumph over Blake.

“Going to school, especially after that Blake game, the hockey players were like celebrities,” Luedtke said. “It makes you want to keep playing.”

Luedtke, who scored 34 goals and added 36 assists in 28 games last season, will play at least one year of junior hockey before heading to the Air Force Academy. He will either play next season for the Coulee Region of the North American Hockey League or, depending on the interest level, in the United States Hockey League.

“No one ever would have guessed he played the whole year in a brace,” Orono coach Aaron Johnson said. “What he did for us and our program was incredible. I know he inspired a lot of our youth hockey players.”

Luedtke said his postseason scoring binge didn’t attract significantly more interest from college coaches. Air Force was the only Division I program that offered him a scholarship.

“It’s an incredible opportunity,” Luedtke said. “They are a great program. They are on the rise.”