Tenth-graders Jack Smith and Blake Perbix showed their great chemistry on two goals that helped the Crusaders to victory No. 16. 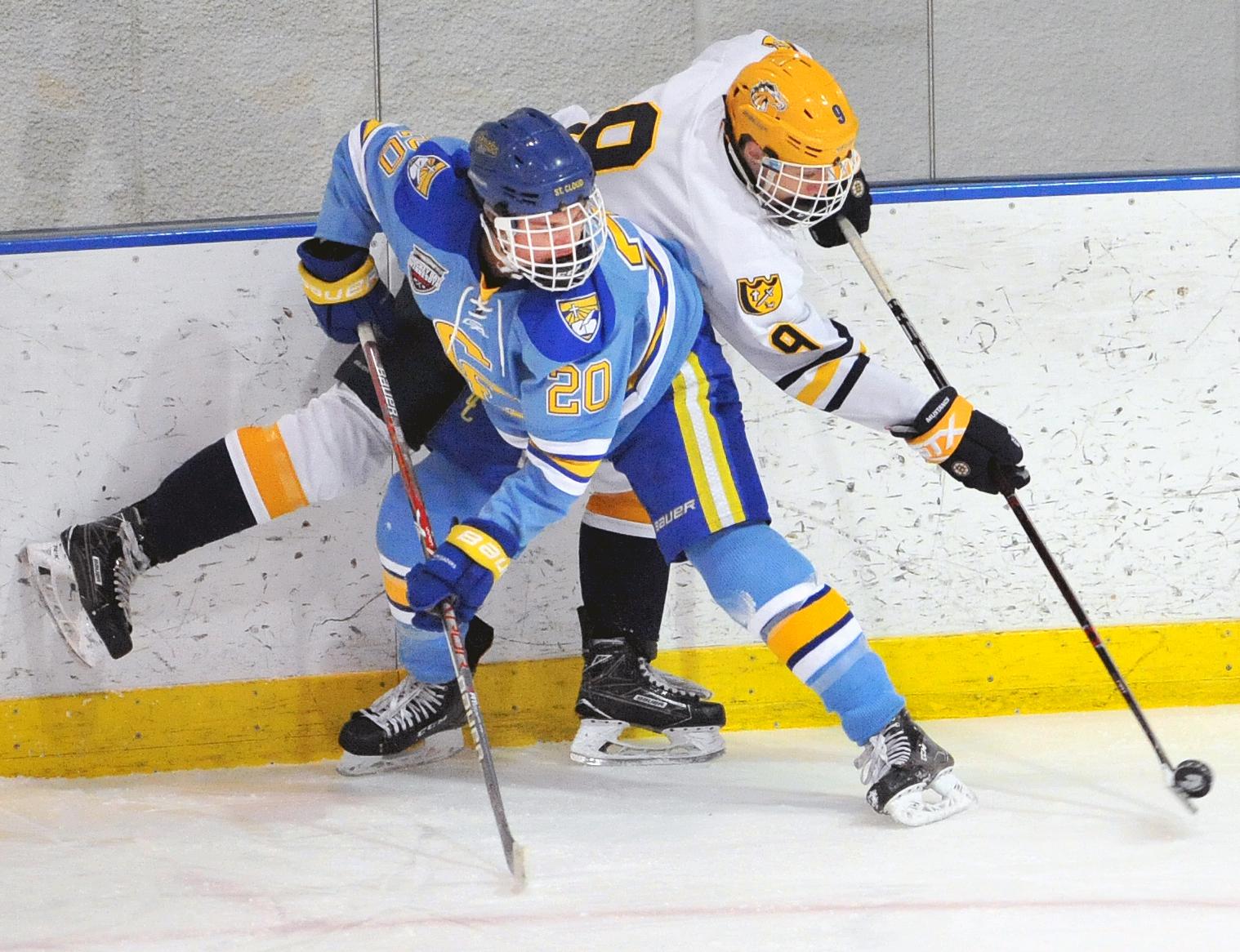 Click photos to view the entire gallery from the game

St. Cloud Cathedral senior Jeron Hirschfeld has been a regular on the Crusaders’ varsity for four years. He’s played in two state tournaments. He’s played in more than 100 high school games and has almost that many career points.

He’s pretty much seen and done everything a high school player can see or do.

Yet even Hirschfeld admits he’s been in awe at times this year watching teammates Jack Smith and Blake Perbix whip the puck back and forth, often without looking, before eventually finding the back of the net.

“They have got great chemistry, they way they find each other on the ice,” Hirschfeld said on Thursday night after Smith scored twice (both times off feeds from Perbix) and Perbix added a goal in 5-3 win over Breck at Breck School Anderson Ice Arena in Golden Valley. “You’d be surprised, the back-door passes they can make, the cross-ice passes. It’s great to watch.”

Hirschfeld is just one of five seniors on a roster that lists 13 sophomores. As a captain, it’s his job to teach the young guys all that he has learned over the years.

“Just work hard, make the easy plays,” Hirschfeld said. “They have been doing a good job of figuring that stuff out. As you can see, we rely on them heavily.”

The youngsters rely on the seniors heavily, too. Hirschfeld said most of the sophomores are too young to have driver’s licenses, so he gets a steady scroll of texts asking for rides to practice, rides to workouts, rides home.

What about rides to get food? Does he accommodate those requests, too?

“Sometimes. It depends if they are behaving,” Hirschfeld said with a laugh, “if they are giving us any attitude or not.”

Smith’s two goals on Thursday gives him 16 this season, two behind team leader Nate Warner (also a sophomore) and two ahead of Perbix. Warner and Smith share the team lead with 43 points, four ahead of Perbix’s total.

With the kiddie corps leading the way, the Crusaders have gone 16-5-0 this season and are ranked No. 6 in the state in Class 2A in the latest coaches’ poll. The win over unranked Breck was St. Cloud Cathedral’s fifth straight following a 1-3-0 January swoon that included losses to Hermantown, Virginia and Delano.

St. Cloud Cathedral coach Derrick Brown said the Crusaders’ inconsistent play is about what he expected out of such a young team, chalking those losses up to “growing pains and learning how to play.”

Indeed, the transition from Bantams to the high school level is significant, Smith said.

“It is a lot faster,” Smith said. “A lot more physical game.”

Smith, the youngest player on the team and still Bantam-eligible, scored the game-winning goal late in the second period on a power play. Of course, it was Perbix who set him up, taking a feed from Nate Martin in the slot and then quickly flipping a backhand pass to Smith, who was left alone to the right of Breck goaltender Blaine Madson. Smith quickly one-timed the puck into a mostly open goal.

“That was huge,” Brown said about the goal that put the Crusaders ahead 3-2. “To go into the third period up by one, that definitely helped.”

An empty-net goal by Perbix in the closing minutes put St. Cloud Cathedral ahead 4-2. Smith added another goal after that off a feed from (who else?) Perbix.

The loss dropped Breck to 6-14-0. A very un-Breck-like record for a team that has made itself at home in the state’s small-school top 10 for the better part of the last decade.

“We’ve had some ups and downs this year, injuries and guys out with concussions, things like that,” first-year Breck coach Glen Lang said. “Probably the last three or four games we’ve been playing a lot better.”

The Mustangs looked good for most of the first period and were seemingly in control well into the second. That’s when Smith struck to give the Crusaders their first lead.

“That power play was a big game changer for them,” Lang said. “If we could have killed that off, it probably would have been a little different.” 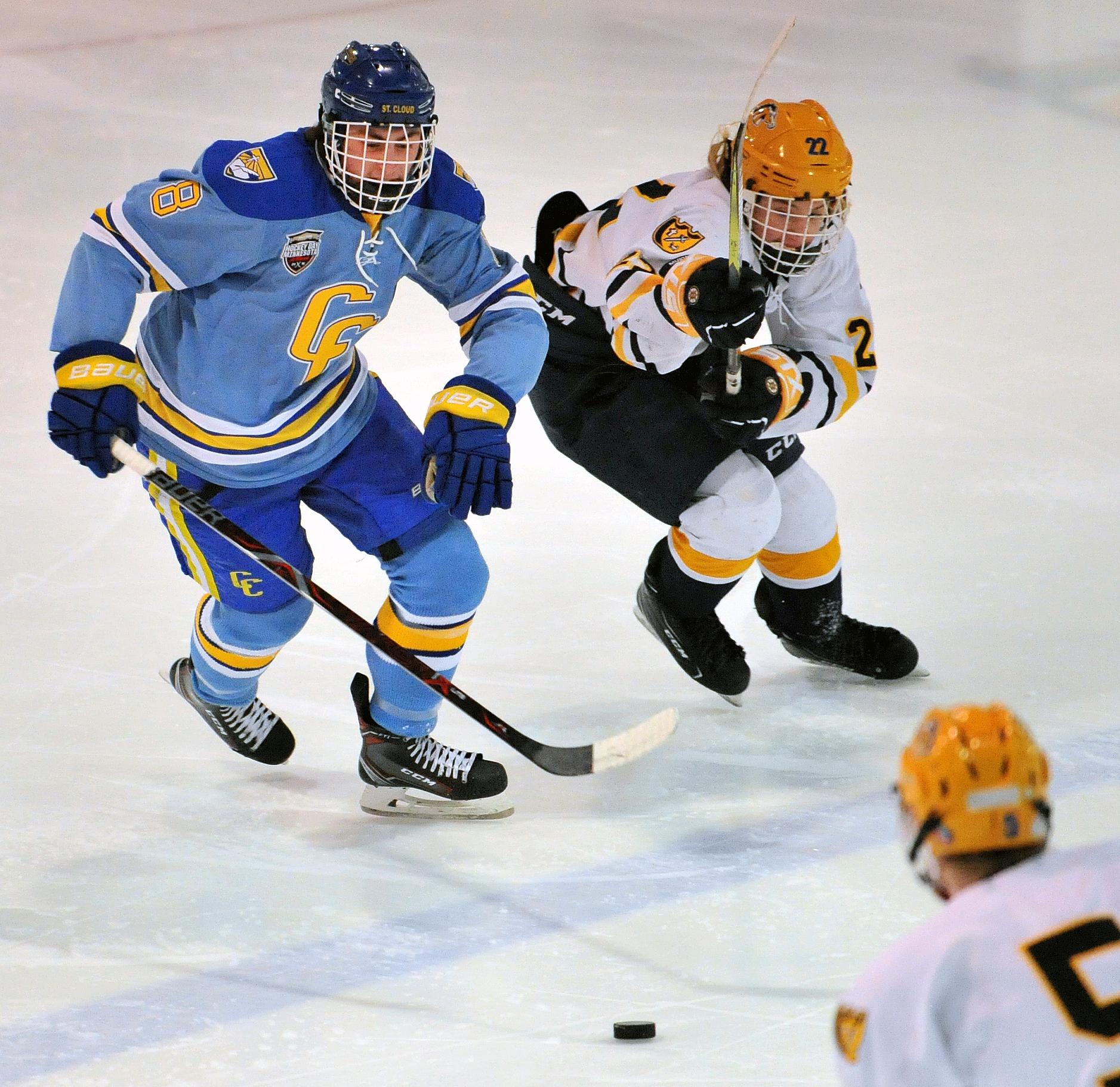 Sophomore Jack Smith scored two goals, including what proved to be the game-winner on a second-period power play, as St. Cloud Cathedral, ranked No. 6 in Class 1A in the latest coaches’ poll, outlasted unranked Breck 5-3 on Thursday night at Breck School Anderson Ice Arena in Golden Valley.

Smith’s power-play goal came courtesy of a cross-ice pass from fellow sophomore and longtime youth hockey linemate Blake Perbix. The goal came with 2:56 left in the second and gave the Crusaders (16-5-0) their first lead at 3-2.

Breck pulled goaltender Blaine Madson in favor of an extra skater with less than 2 minutes remaining, and Perbix wheeled and fired into an empty net from outside the blue line with 1:14 remaining. Perbix set up another Smith goal just 12 seconds later to make it 5-2.

Breck’s Matthew Conroy opened the scoring, and Grant Larson put the Mustangs (6-14-0) ahead 2-1 midway through the second period. Harrison Klopp added a goal with 15 seconds remaining in the third.