Buffalo falls flat at Rogers, bounces back on Hockey Day 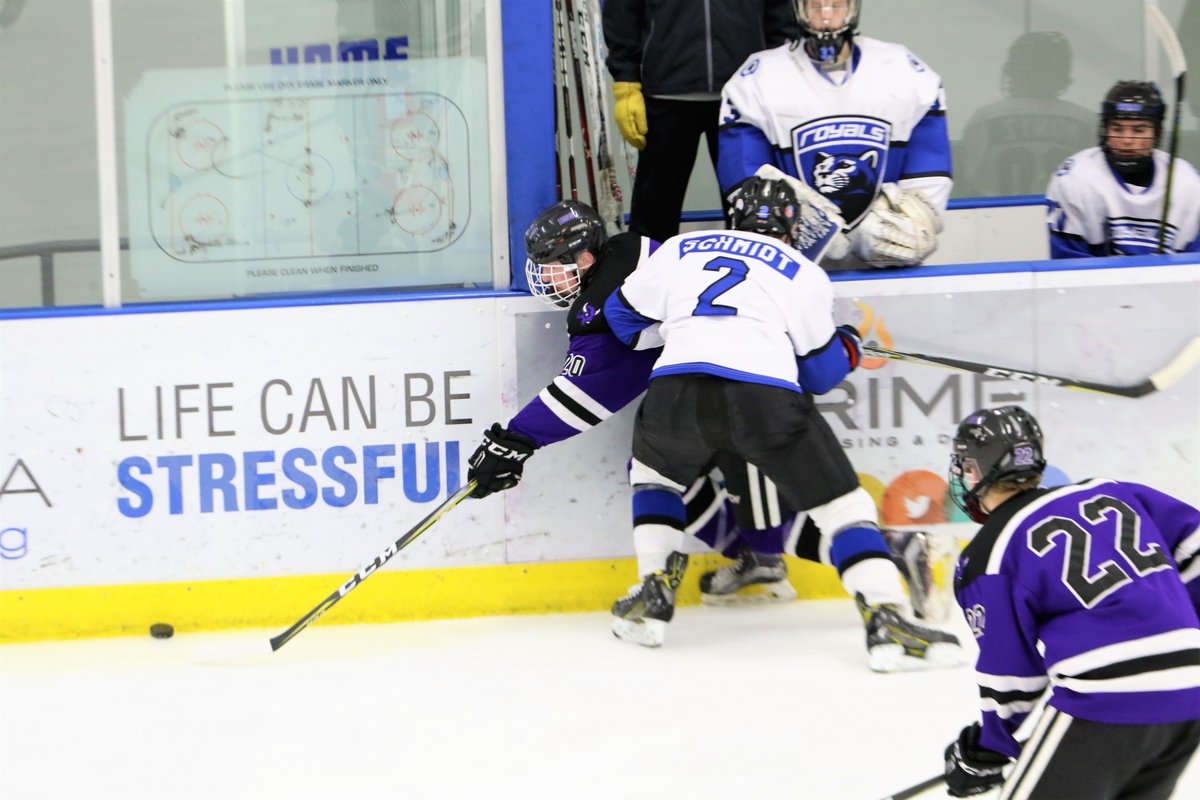 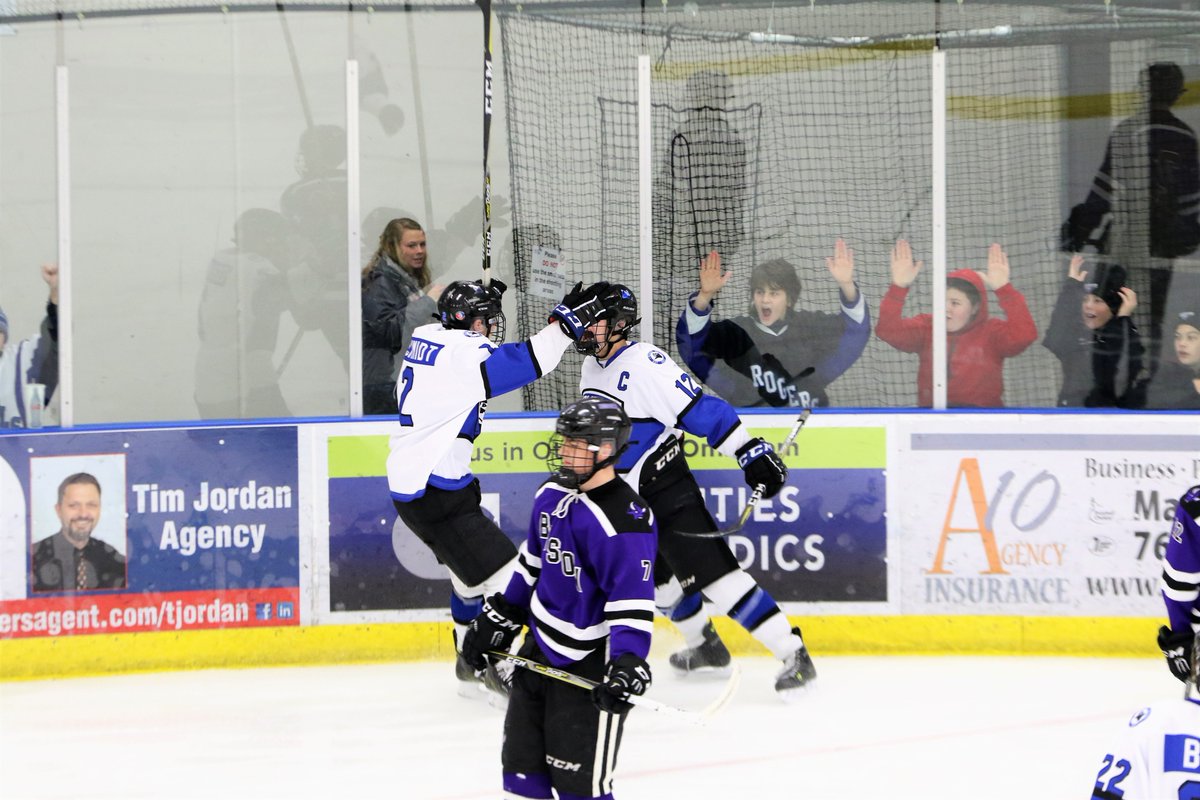 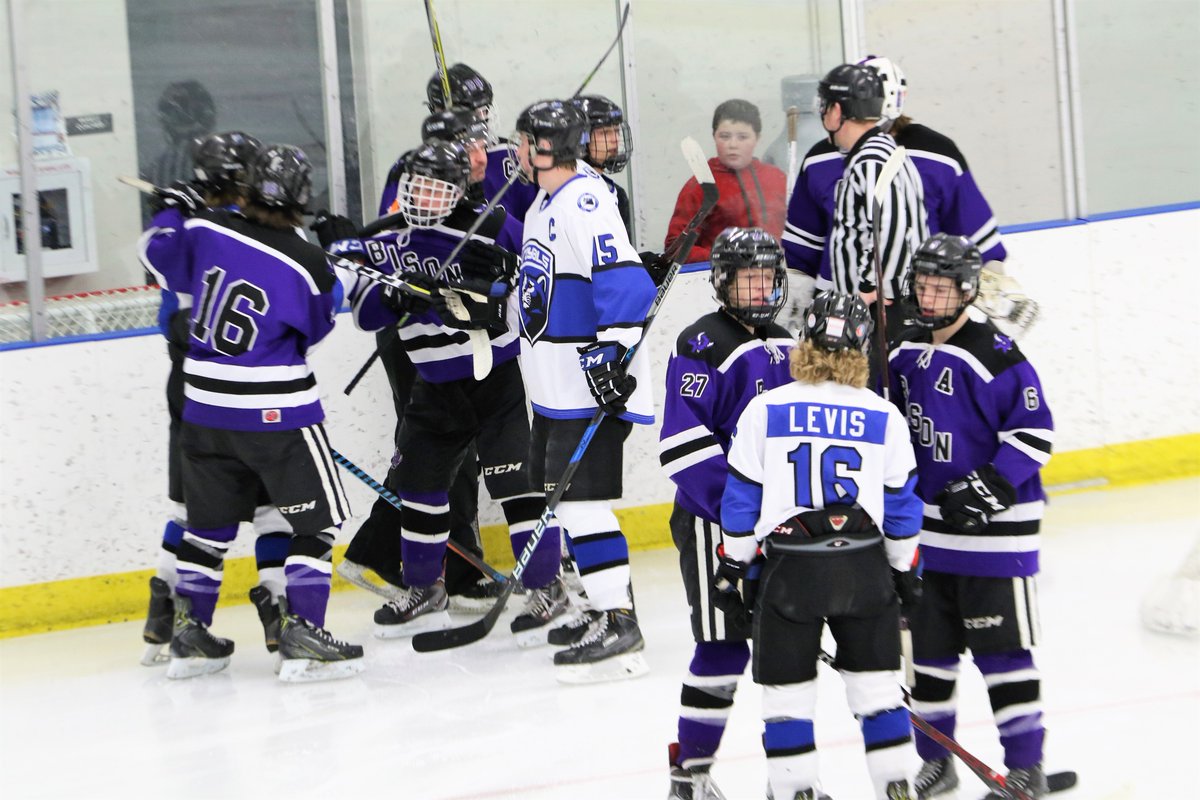 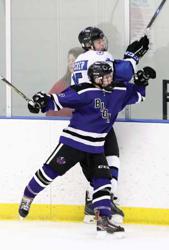 Buffalo's Tyler Braccini (front) checks Mitchell Becker of the Royals along the boards during last Thursday's contest at Rogers Activity Center. Rogers won the contest 5-3. Braccini, and the Bison rebounded two days later with a 4-1 home win over North Br

With both conference and section implications on the line, the Rogers Royals boys' hockey team took one step forward, while the Buffalo Bison took one giant step back.

With both teams battling to stay out of the basement in the ultra-competitive Section 8AA, Justin Grudem scored a pair of goals, including an empty-netter from his own blueline with 27 seconds left in regulation, sealing a 5-3 home win last Thursday for the Royals.

For Rogers, they had the jump from the start. Aaron Schmidt scored 2:33 into period one on a long shot that beat Bison goalie Nathan Mueller. The goal sparked the Royal bench and the Bison looked overmatched until two late penalties resulted in power-play goals by Buffalo's Joe McNamara and Tyler Marr.

Buffalo took a 2-1 lead and an 11-10 shots advantage into the first intermission. If not for the two power plays, Rogers dominated all but four minutes of period one.

"We did nothing right in the first period," said Bison Head Coach Aaron Johnson. "Our power play bailed us out. Then when the power play mattered in the second period, they completely forgot what they did in the first to have success and they started deviating and doing whatever they wanted."

Mitchell Becker tied the score 2-2 at 3:22 for Rogers to open the second period. But like the first, Rogers got into penalty trouble when Logan Bolster was accessed a five-minute major for boarding and a 10-minute unsportsmanlike conduct.

Buffalo failed to mount any threat in the five minutes, and halfway through the penalty, Grudem capitalized on a Bison turnover and scored an unassisted shorthanded goal, putting the Royals up 3-2.

Knowing his team was playing well even strength, Rogers Head Coach Todd Weisjahn had only one bad thing to say about Thursday's game.

"We're a really good 5-on-5 team, but anytime there's a lot of penalties, it disrupts the flow, some guys don't get to play as much, and it makes it tough to move forward when guys are taking penalties," Weisjahn said.

Other than a little over-aggressive play from a few of his players, Weisjahn had no gripes in how his team played, particularly in shutting down Buffalo's biggest weapons.

Jake Braccini was held pointless for the first time in nine games.

"That's two times we've done that this year," said Weisjahn, referring to a 1-0 loss last Dec. 5 in Buffalo in which they held Braccini without a point. "We're very happy about that. Jake's a great high school player who's getting better game-by-game. When you play top players like Jake and Tyler Braccini, Joe McNamara and Nathan Mueller, you find a game plan where you attack them, defend them, and find ways to win."

McNamara and Tyler Braccini each had a goal and an assist in Thursday's contest. Tyler's goal pulled the Bison within 4-3 with 8:06 left in regulation.

Buffalo nearly tied the score when Tyler's shot sneaked through the pads of Rogers' goalie Nate Johnston, but no Bison player was near the goal with the puck lying open in the crease.

With River Goodmanson, who started period three for Mueller, pulled for an extra attacker, Grudem sealed the deal with his empty-net goal.

Buffalo coaches were fuming afterwards at the lack of focus during and before the game.

"They (Rogers) played harder, they competed harder, they were ready to play, and we had five guys forget pieces of equipment tonight," said a frustrated Johnson. "It's unbelievable and so disappointing that a game like this with so much on the line for conference and section that we have guys show up not even ready with their gear."

On the bright side, Johnson singled out senior Tyler Marr, who scored his second goal of the season with a tip of McNamara's shot in the first period on the power play.

Buffalo finished 2-for-4 with the man advantage and outshot Rogers 33-31 for the game.

"It was a close one tonight," Marr said. "I think we could have played with a little more effort. It felt like Rogers was willing to work harder, and they brought more."

While all eyes were on St. Cloud for the 12th Annual Hockey Day Minnesota celebration last Saturday, Buffalo was looking to make amends for Thursday's letdown by hosting a much-improved North Branch squad.

Led by the return of junior alternate captain Treyton Welch, the Bison steamrolled the Vikings 4-1.

Known for his big hits and net presence, Welch assisted on the game's opening goal by Ryan Nelson 4:17 into period one.

Buffalo extended the lead to 3-0 on goals by Jake Braccini and Ben Klein. The Bison led 3-1 after two periods, and added an insurance goal early in period three on Klein's second of the game.

After a stinker of a game in Rogers, Buffalo knew they needed a bounce-back game against North Branch.

"I think a lot of people look at North Branch and they think they are a bad team," Marr said. "They bring all they got, and it's never a cakewalk."

As for playing at home on Hockey Day Minnesota, Marr said: "It's fun. It's always packed, especially this year. Playing in Buffalo is awesome."