The senior captain has overcome cystic fibrosis to be the all-time points leader for the Dragons. 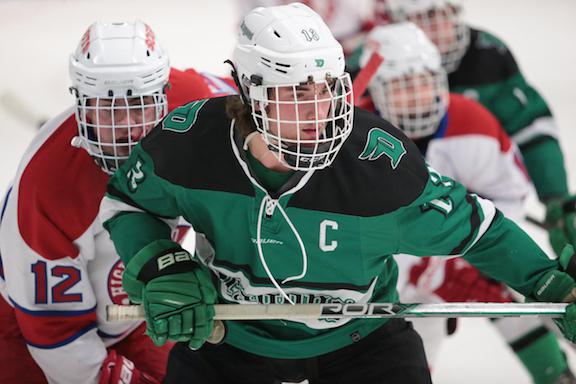 Jonah Bergstrom requires treatment for cystic fibrosis twice a day, a routine that has always been "normal" for the senior forward who has been a varsity player for Pine City for five years — the last two as a captain. Photo by Cheryl Myers, SportsEngine

He’s a three-sport athlete and is captain of his high school football and tennis teams, but hockey is his focus. On the ice, the Pine City Area senior forward is a five-year varsity player and two-year captain.

Just after the new year began, he became the program's career points leader — a rare achievement since the mark stood for 20-some years.

Oh, and he's done it all with cystic fibrosis.

And yet, the most uncommon thing about Jonah is not that he has the disease. Instead, it’s the way he handles it — a way that nobody would know he has the condition, and that's the way he wants it.

Living with cystic fibrosis has become commonplace for Jonah, who requires a 30-minute treatment when he awakes in the morning and another just before going to bed -- every day, no matter how tired he is or how important the next day may be.

“Yeah, it’s just part of my life, I guess,” Jonah said. “Kind of like brushing your teeth when you wake up. It’s just what you gotta do. So I know when I get home I gotta do it, and I know when I wake up I have to do it, so it doesn’t really faze me at all.”

Yeah, it’s just part of my life, I guess...Kind of like brushing your teeth when you wake up. It’s just what you gotta do...so it doesn’t really faze me at all.

Cystic fibrosis is a genetic condition that largely affects the lungs, usually marked by excessive mucus buildup and chest infections. Many children find it hard to put on weight due to the condition. Jonah, who stands about 6 feet tall and weighs nearly 200 pounds, does not face that particular problem.

What Jonah does to manage the disease — which has no cure — is twice daily wear a vest connected to a machine that pumps air through it to shake loose any mucus built up in his lungs, allowing him to cough it out. He also wears a nebulizer to inhale medicine.

If the Dragons stay overnight for a game or tournament, he brings his equipment along and goes through the same routine in hotel rooms while watching movies or playing video games with his teammates.

While his teammates made sure their heads hit pillows as soon as they were back, Jonah had a treatment before going to sleep. And in the morning, he carved out time for another treatment before getting to school by 8 a.m.

While most teenagers may shudder at adding a half-hour of responsibility to their morning routine, Jonah just goes about his business.

“I’ve not once heard him complain about doing therapy,” said Al Bergstrom, Jonah's father. “And now, it’s ‘I’m going to go downstairs and do therapy.” 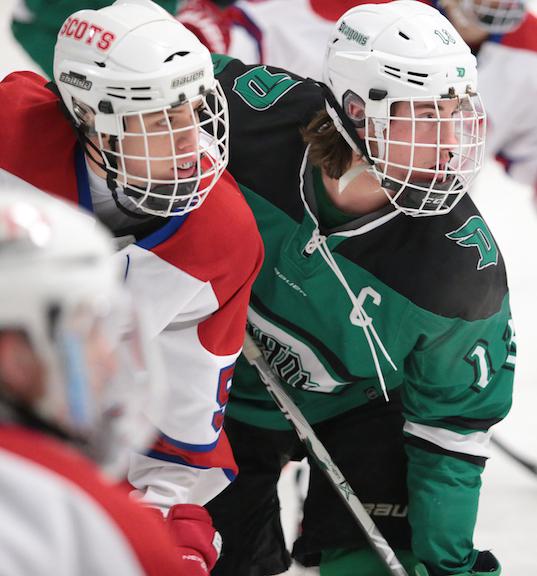 Mary Bergstrom, Jonah's mother, said her son never let the disease limit him. "He set his mind to something and he did it,” she said. Photo by Cheryl Myers, SportsEngine

Not defined by the disease

Al and Mary made sure Jonah understood his condition from an early age, and it was never something to be hidden or embarrassed about. It was always out in the open, though assistant coaches on the tennis and football teams — and many of his teachers — weren’t aware of his condition until recently.

Mary said Jonah was always involved in everything, including basketball and soccer before finally picking hockey as a focus.

"He set his mind to something and he did it,” Mary said. "We just encouraged him to do whatever he loved to do."

That encouragement turned Jonah into a player — one with an uncommon mix of hard work and talent — that a team can be built around, said Pine City boys’ hockey coach Grant Nicoll, Jonah’s godfather and Al’s cousin. He’s a player not recognized for overcoming a disease, but one who is known for his on-ice performance — he grinds all game and plays on both the power-play and penalty-kill units — and his leadership.

“He’s that kid that waits around, makes sure the locker room is clean, whether we’re at home [or] away,” Nicoll added. “He’s the last one off the bus, walking up and down the aisles making sure all the garbage is picked up.”

It's an attitude he’s honed since making the varsity as an eighth-grader. He was about the same size today as he was five years ago, which aided his call-up. Throughout the years, Jonah made sure to note what he saw from the many team leaders who came before him.

He's used what those captains have done well, and not so well, to shape his leadership style.

“He’s really important to this team, I don’t know what we’d do without him,” teammate Jordan Stich said. “He’s always getting us up."

Breathing life into the Dragons' program

As his senior season nears its end, Jonah’s already achieved much and yet he said there's more to accomplish.

He broke Jonah Rydberg-Sauter's previous points record of 198 and sits at 209 heading into the final two weeks of the regular season. He hopes to add to his total with an extended playoff run.

While Jonah was born with an innate ability to be the type of player who can out-skate, out-stick-handle and out race opponents, his desire to do the little things — such as dig out dirty goals — is what really sets him apart, Nicoll added.

"He’s just going to come at you for three periods straight and not slow down.”

That tenacity has helped Jonah lead the Dragons in goals (19), assists (29) and, of course, points (48) on the season. He's also guided the team to a 17-5 record and it’s third consecutive Two Rivers Conference championship. And that’s after Pine City was 5-20-1 in his first varsity season.

The significance of what Jonah and his teammates have done for the program is evident.

The final dream is a state tournament appearance. It’d be a fittingly uncommon cap to a career that’s featured a young man who not only put up points, not only helped his team win, but did so with cystic fibrosis.

While the disease continues to be a footnote in Jonah’s life, he has his sights set on his next defining moment.

“I really do feel like we have a shot at making a big run in the section this year,” he said.