The Spartans’ last section title was in 2014, but the seniors were state bantam champs. 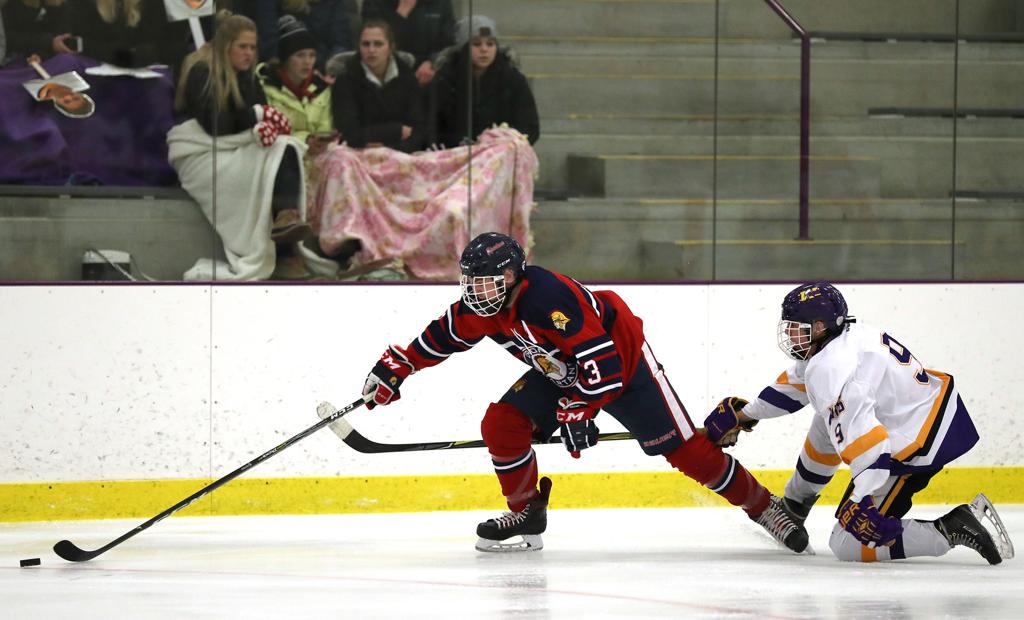 Davey Burns, left, of Orono and Ayden Rakos of Waconia chase the puck in a game Feb. 12 at Waconia. Photo: LEILA NAVIDI * leila.navidi@startribune.com

Orono’s seniors led their bantam hockey team to a state championship as freshmen in 2015.

This month, they have a chance to help the high school team earn its first Class 1A state tournament berth since 2014.

The Spartans, ranked fifth in the latest Class 1A poll from Let’s Play Hockey, should enter Section 2 play this week as the top seed, after going 16-7-1 this season heading into Thursday’s final regular season game. They’re one of several new front-runners in the section, which for years has been dominated by Breck and, more recently, Delano.

Mound Westonka, which hasn’t been to state since 2001, was ranked sixth in the latest Class 1A poll, after compiling a 17-6-1 record through Wednesday. A resurgent Minneapolis team went 15-10 during the regular season and was ranked 11th in the poll.

Meanwhile, Delano and Breck have struggled somewhat this season after losing their top players from last year’s teams. The Tigers were 12-12 as of Wednesday, though still ranked ninth, while Breck was 7-16 and ranked 19th.

“It definitely has a different feel to it coming into sections,” Orono senior Davey Burns said of this season.

Orono started this season 6-0-1 and went 14-3 against Class 1A opponents, including a 9-1 record against Section 2 teams. Senior forwards Jack Suchy and Thomas Walker led Orono in scoring as of Wednesday with 15 goals apiece. Senior Dane Korsi added 11 goals and Burns 10.

Senior goalie Evan Babekuhl has a .921 save percentage.

“He gives us a chance to win every single game,” Burns said.

The Spartans are coached by Will Scholz, who took over in November from former NHL player Mark Parrish, now an assistant. Scholz said his team’s strengths are its forwards and goaltending, adding that strong forechecking is key for his group.

He said the team appears confident going into sections, noting the number of close games it played this season.

“If they go out and do what they’re capable of doing, I think they’ll get the results they want,” he said.

Success on the rink, meanwhile, had been more elusive for Mound Westonka’s seniors until this season. The group hasn’t had a winning season since its first year of peewee hockey, according to first-year coach Jake Hindermann.

He attributed this year’s turnaround to a large group of upperclassmen and to the players buying into a new summer training program. He said team members committed to becoming good hockey players and working hard every day.

“I don’t think any of them thought we could be good,’’ he said, “but now they want to be great.’’

Seven players had scored at least seven goals for the White Hawks as of Wednesday, including Jack LaTour (13 goals), Brady Aufderheide (12 goals), Torsten Lee (11) and Hank Nagel (10). Goalies Noah Coley and Cole Broome have split time this year, combining to save about 91 percent of opponents’ shots on goal.

Minneapolis and Delano appear to be the next most competitive teams in the section. Minneapolis, a co-op of Minneapolis Public Schools, has been led by senior Jacob Erickson, who scored 33 goals in the regular season, and senior Huck Sorock, who added 21. The Minneapolis district was last represented at state by Edison in 1994.

Delano, which won Section 2 last year, has been led by seniors Jack Paulson and Justin Daly, who each have 19 goals.