The Dragons advance to the state tournament after winning the Class 1A, Section 3 title. 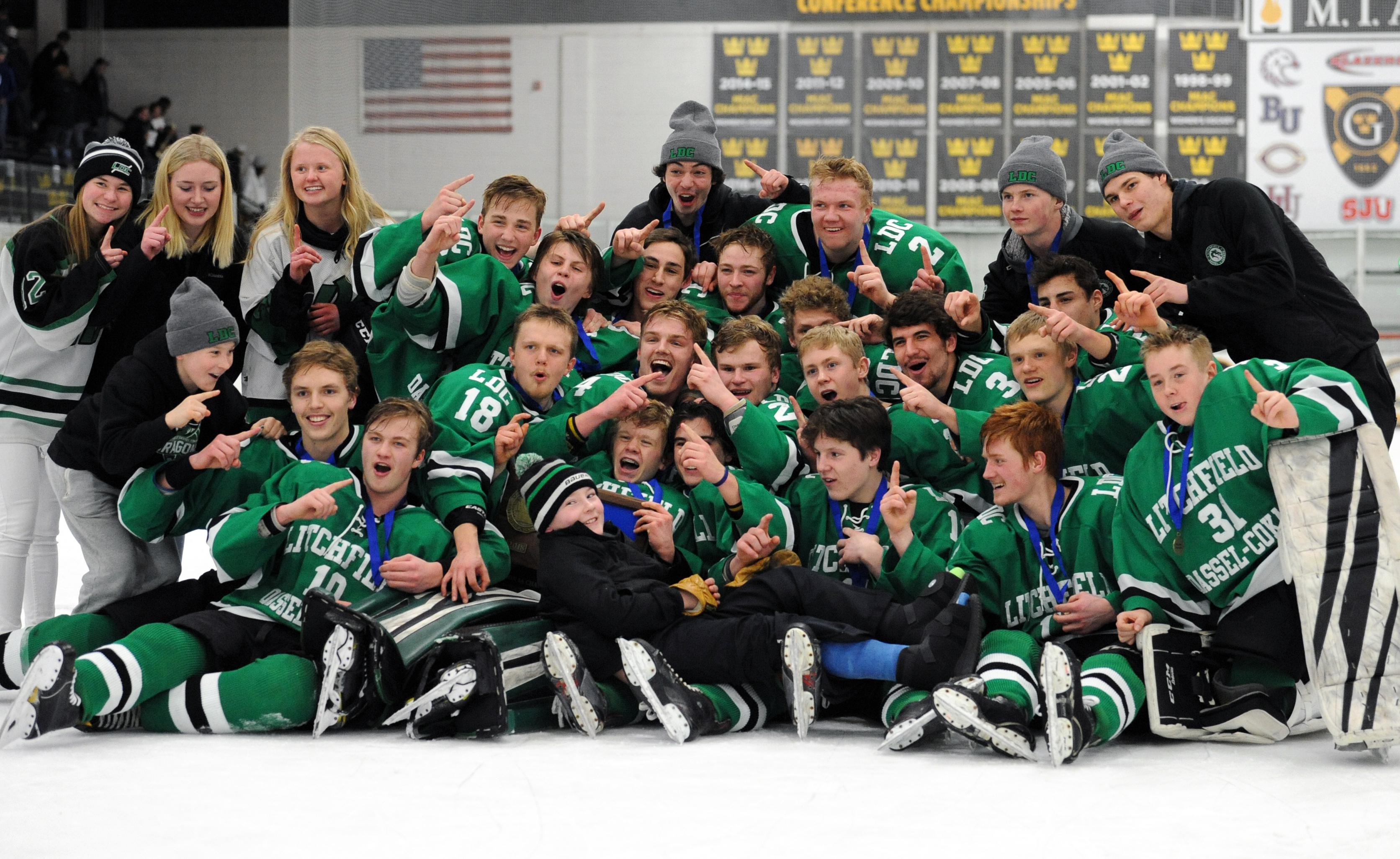 Litchfield/Dassel-Cokato won the Class 1A, Section 4 championship on Wednesday with a 4-1 victory over Luverne. Photo by Loren Nelson, legacyhockeyphotography.net

Puck drop in a packed arena was fast approaching, and Litchfield/Dassel-Cokato's Chris Olson felt the urge to gauge the mindset of freshman goaltender Darby Halonen.

Halonen was, after all, about to play in the biggest game of his young career.

“I asked him if he was ready, and he said, ‘I’ve been waiting for this my whole life. I can’t wait for this. I’m so excited,’ ” Olson said.

With Halonen snaring high shots, smothering low shots, cutting down shooters’ angles, pouncing on rebounds and doing most everything else a hot goalie does, the No. 2-seeded Dragons upended top-seeded Luverne 4-1 on Wednesday in the Class 1A, Section 4 championship game in front of about 1,600 fans at Don Roberts Arena on the Gustavus Adolphus College campus in St. Peter.

“I was nervous, but you just try to stay as calm as possible and go out there and get the dub,” Halonen said.

Dub. As in W. As in victory. Halonen did his part and then some to propel his team to next week’s Class 1A state tournament, stopping 35 of 36 shots. Not bad for a kid still in braces and who, in street shoes, barely stands taller than the crossbar.

“If I said he was 5-5 I might be stretching it,” Olson said. “And our backup goalie is even shorter.”

Halonen and the Dragons (16-11-1) gained confidence in their upset bid through a scoreless first period. When the Litchfield/Dassel-Cokato’s Corey Benda scored the only goal of the second period Halonen was all but certain the “dub” was theirs.

“When we scored first I said, ‘We got this, we got this,’ ” said Halonen, who played all but a handful of periods in goal for Litchfield/Dassel-Cokato this season and posted a 13-9-1 regular season record with a 3.19 goals-against average and .884 save percentage.

“He played out of his mind,” Dragons captain Brandt Pedersen said about Halonen. “He slows the game down, stops what he needs to. We got just what we needed from him.”

Litchfield/Dassel-Cokato’s physical, grinding approach seemed to wear down the speedy Cardinals, ranked No. 18 in the Class 1A coaches' poll, by the third period. Many of the shots Luverne (20-7-0) did manage to get on goal were either from bad angles or long range.

“In the end he played a heck of a game,” Luverne coach Phillip Paquette said. “We put the shots there, but the puck placement wasn’t quite what we wanted. We shot a few pucks into him.” 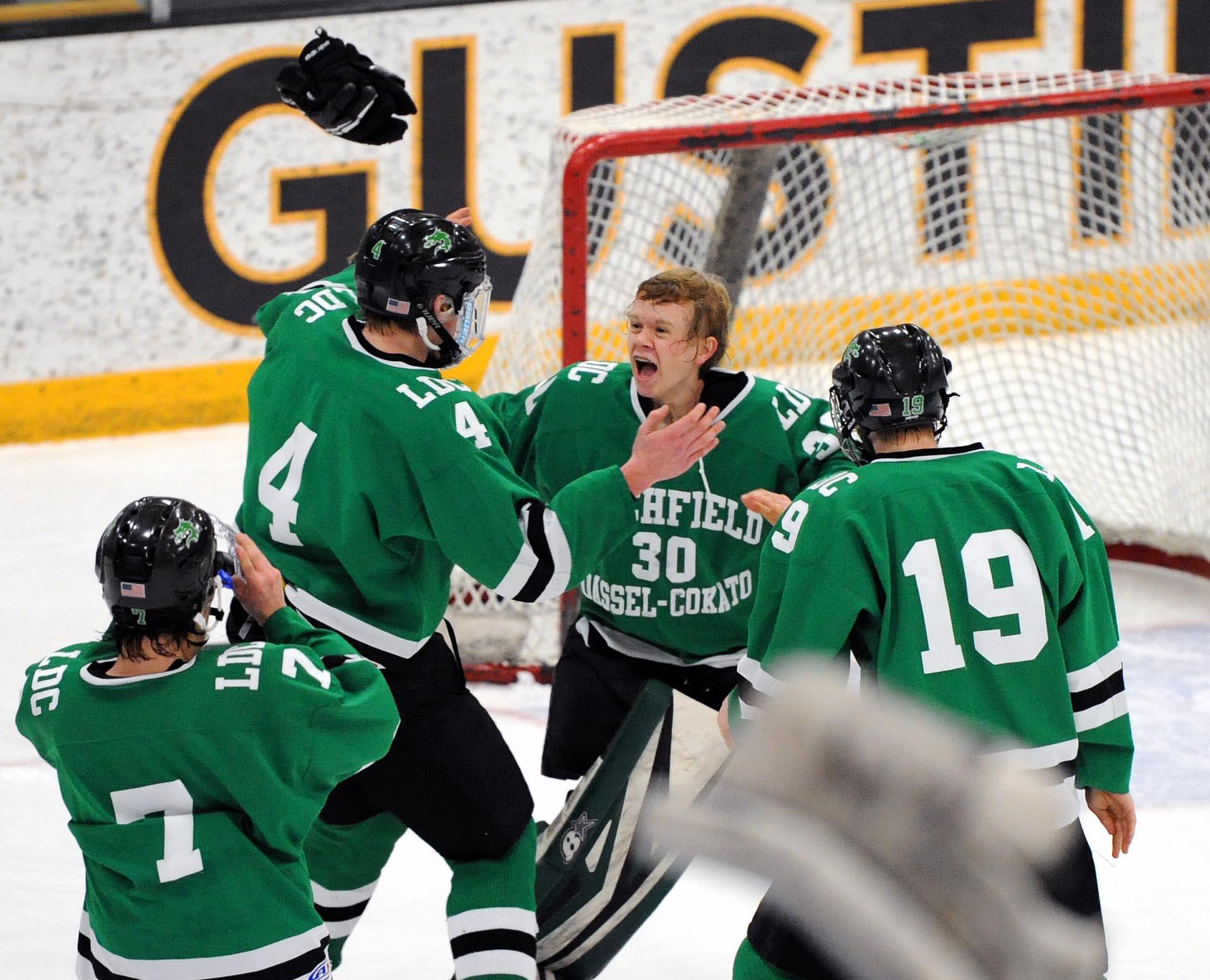 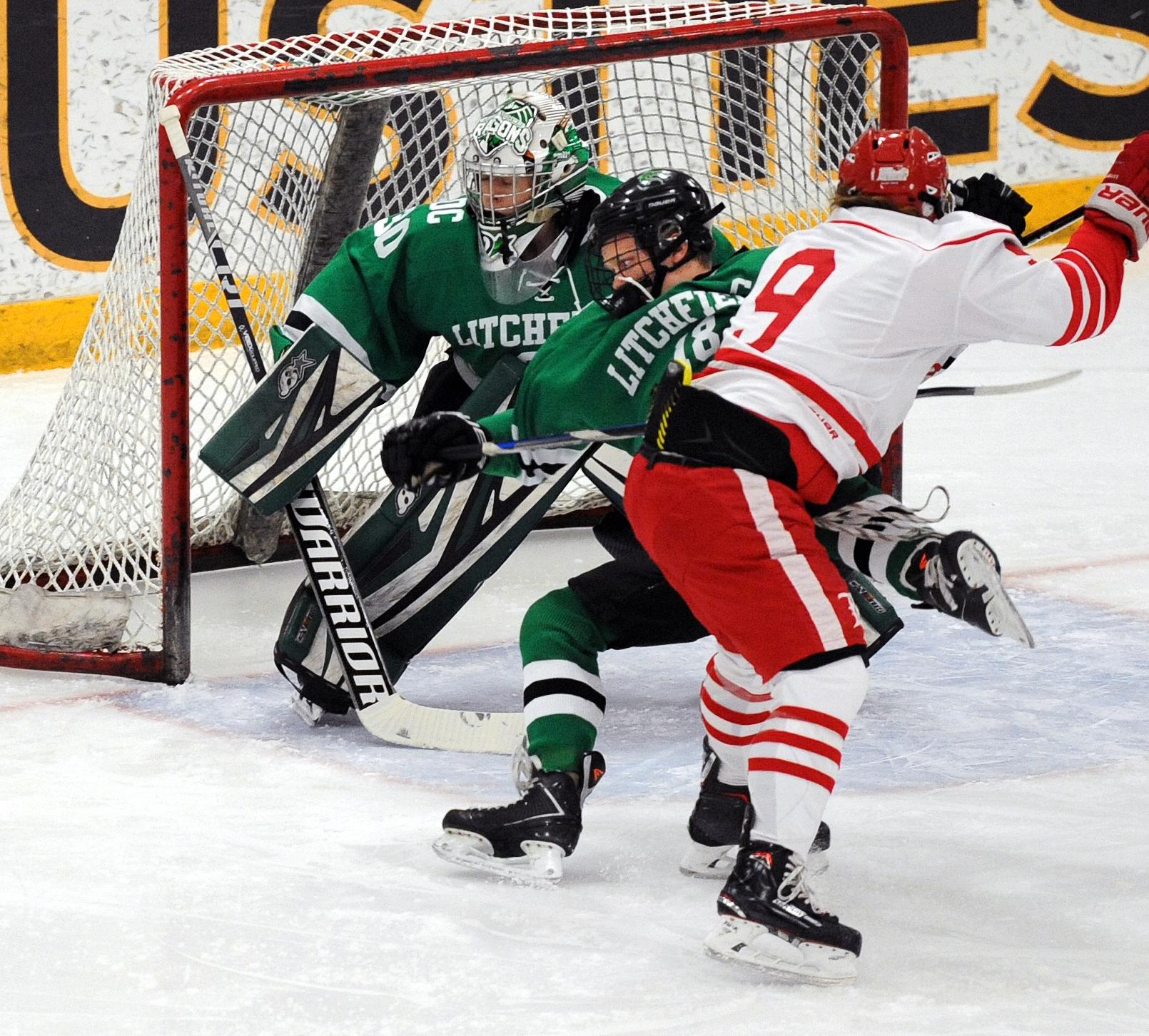 Senior captain Orrin Grangroth had a goal and an assist, and freshman goaltender Darby Halonen stopped 35 of 36 shots as No. 2-seeded Litchfield/Dassel-Cokato upended No. 1 seed Luverne 4-1 on Wednesday in the Class 1A, Section 3 championship at Lund Arena on the Gustavus Adolphus College campus in St. Peter.

Grangroth scored what proved to be the winning goal when he scored 44 seconds into the third period to put the Dragons (16-11-1) ahead 2-0. Gaige Nath scored 3:34 into the third to pull defending section champion Luverne (20-7-0) to within 2-1, but Litchfield/Dassel-Cokato controlled play for most of the rest of the game, getting goals from Blake Johnson and Brandt Pedersen (into an empty net with 47.8 second remaining) to secure the victory.

The diminutive Halonen made 14 of his saves in the third period and was a blur of motion as he continually cut down angles and jumped on rebounds. The section championship victory was the Dragons’ second over the Cardinals, who are ranked No. 18 in the Class 1A coaches' poll, in the last three years. Litchfield/Dassel-Cokato beat Luverne 7-6 to reach the state tournament two seasons ago.

After a scoreless first period, Corey Benda scored the lone goal of the second to put Litchfield/Dassel-Cokato ahead 2-1.

The Dragons will be making their fourth state tournament appearance in program history when the Class 1A quarterfinals begin on Wednesday at the Xcel Energy Center in St. Paul. 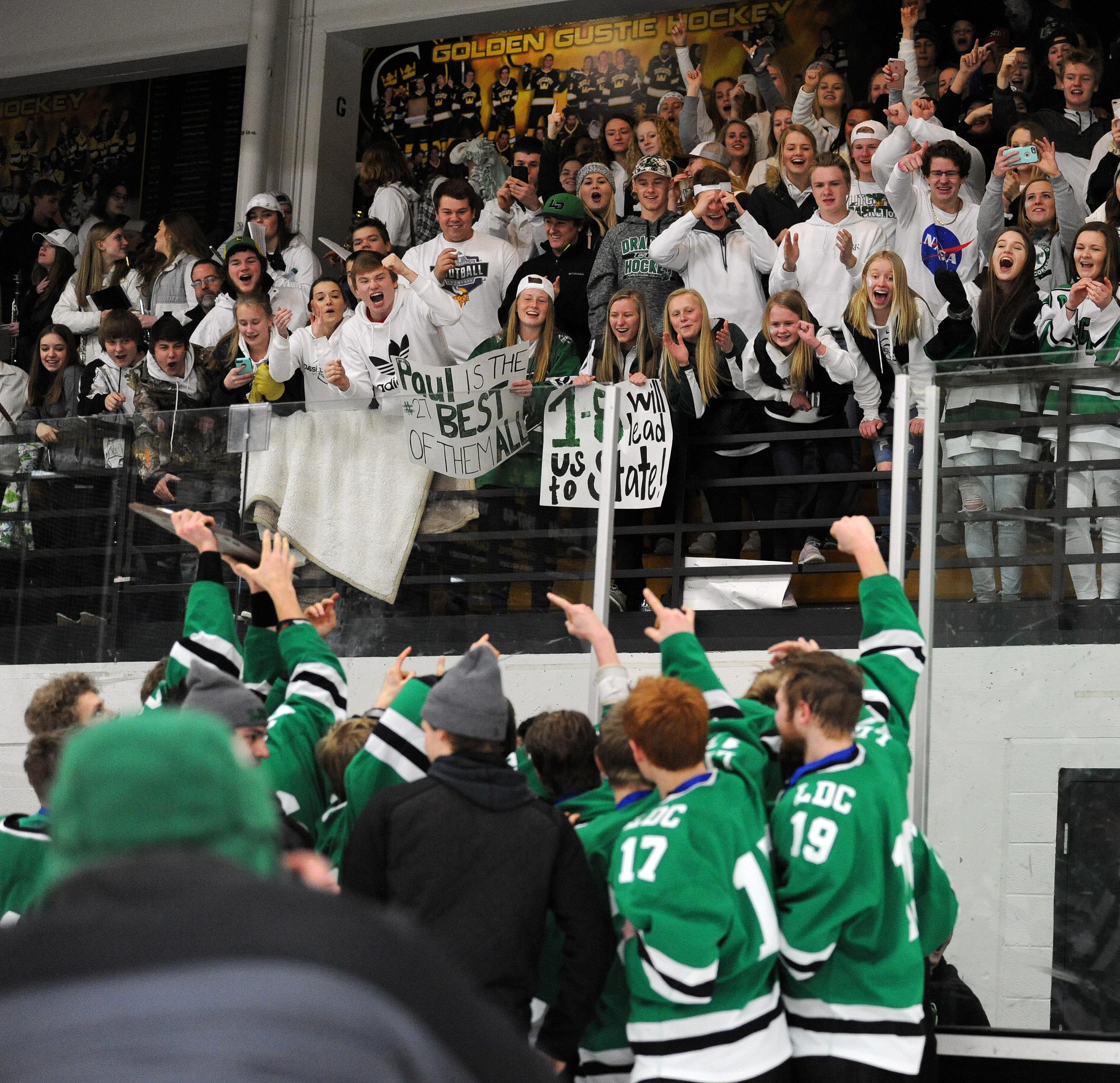 Litchfield/Dassel-Cokato players celebrate their Class 1A, Section 4 championship in front of their cheering section on Wednesday after a 4-1 victory over Luverne. Photo by Loren Nelson, legacyhockeyphotography.net