Trailing 2-1 after two periods, the second-seeded Zephyrs scored three times for a 4-2 victory. 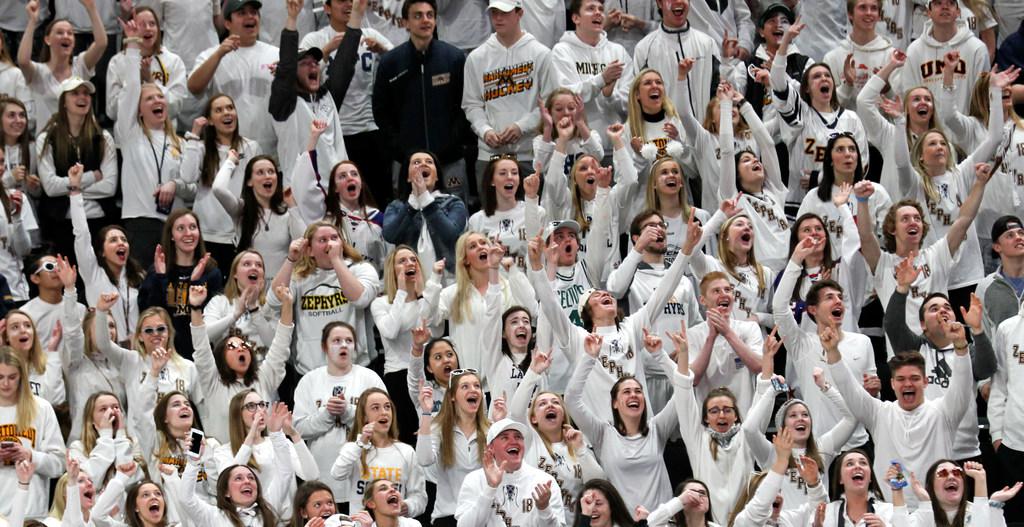 Mahtomedi, the state’s sixth-most penalized team in the regular season, has so perfected every nuance to killing penalties that, in practice, the Zephyrs’ power-play sputters to the point that working on it becomes “counterproductive,” according to Mahtomedi coach Jeff Poeschl.

Yet it was power-play goals from Charlie Bartholomew and Kory Pilarski in the final 1:51 that vaulted the No. 2-seeded Zephyrs to a 4-2 victory over unseeded Mankato East/Loyola on Wednesday in the Class 1A state quarterfinals at Xcel Energy Center in St. Paul.

“Everybody was getting involved and everybody was moving it quick and fast,” said Bartholomew, the Zephyrs’ scoring leader who slammed a shot underneath Mankato East goalie Jack Cusey for the game winner with 1:51 left.

Junior Kory Pilarski added another power play goal 58 seconds later on a wraparound at the same side of the net as Mahtomedi (22-6-1), ranked No. 2 in the state in Class 1A, avoided the first-round upset that it suffered last season.

With the score tied 2-2, Mankato East (16-11-2) freshman Layten Liffrig was called for a 5-minute checking-from-behind misconduct with 5:49 left.

“Right now, it stings,” Mankato East coach Adam Fries said. “We had the momentum on the two shifts right before that penalty.”

As for all those frustrating Zephyrs practice sessions, maybe they weren’t so fruitless after all.

“We kind of practiced that little play,” Bartholomew said about his winning goal. “It worked out pretty well today.”

Senior Charlie Bartholomew and junior Kory Pilarski scored power-play goals in the final 1:51 of the third period to lift No. 2-seeded Mahtomedi past unseeded Mankato East 4-2 on Wednesday in the first of four Class 1A state quarterfinals at Xcel Energy Center in St. Paul.

Bartholomew, the Zephyrs’ leading scorer, walked the puck from the side of the Mankato East (16-11-2) net and fired a low shot past Cougar goaltender Jack Cusey for the winning goal with 1:51 left. Pilarski scored just on a wraparound from the same side of the goal just 58 seconds later to put Mahtomedi (21-6-1) ahead 4-2.

Mankato East freshman Layten Liffrig was called for a 5-minute major and 10-minute misconduct for checking from behind with 5:49 left in the third. Two minutes of that Mahtomedi power play was wiped out when the Zephyrs’ Tom Paradise was called for interference with 5:09 left, but both late Mahtomedi goals were scored when its 5-minute power play resumed.

Joe Paradise tied the game 2-2 just 31 seconds into the third period. A blocked shot caromed to him near the top of the left faceoff circle and he quickly wheeled and fired a shot past Cusey.

Sam Schulz put the Cougars ahead 2-1 with 3:32 left in the second after he broke free for a partial breakaway and banked a low shot in off the left goalpost.

Mankato East tied the score at 1 just 1:56 into the second when Adam Megard fired a low shot off Mahtomedi goaltender Bailey Huber’s left leg and into the net.

Both of the Cougars’ second-period goals were initiated by long passes out of the Mankato East defensive zone. Both of those clearing passes went to forwards stationed in the middle of the rink near the Mahtomedi blue line, and the forwards then one-touched the puck to a teammates streaking into the zone.

Mahtomedi outshot Mankato East 17-3 in the first period and scored the only goal when Joe Paradise converted a three-way passing play with linemates Bartholomew and Nikolai Dulak.

The scoring play started with a Mankato East turnover at the Cougars’ blue line. Paradise completed the tic-tac-toe passing play when he fired a low shot that beat Cusey between his leg pads.