The defending champion Hawks held off the Moose 4-2 to advance to the Class 1A semifinals. 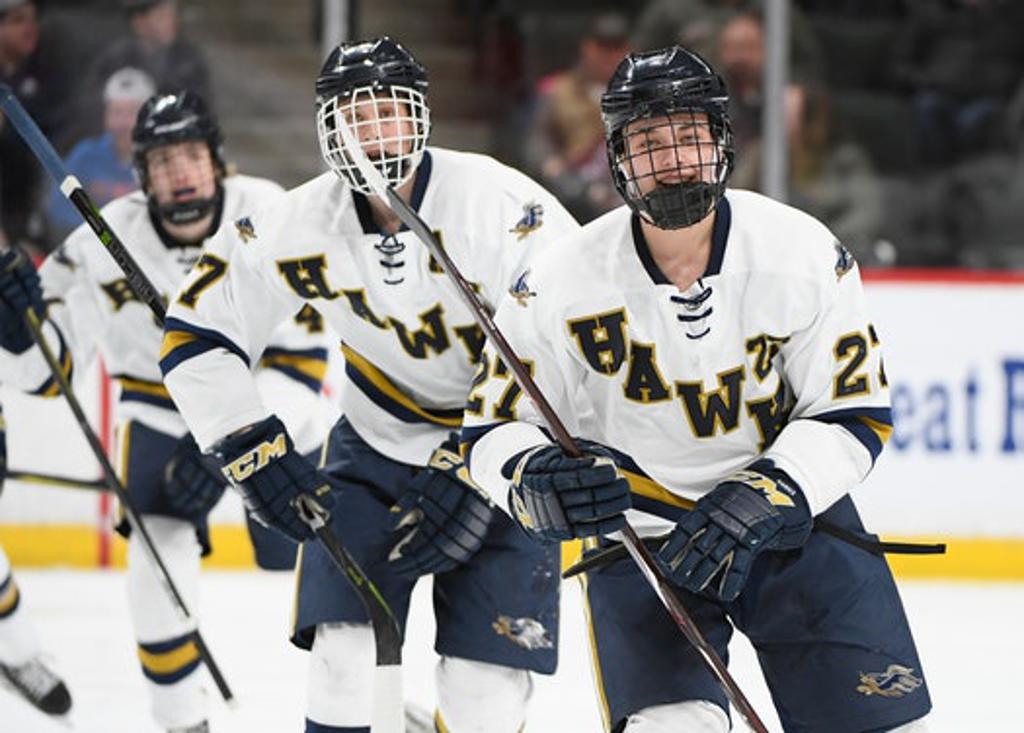 The first goal of his three goals came on a soft, arching flip shot from the slot. A knuckle-puck that fluttered into the back of the net.

“It was kind of a lucky goal, but we’ll take it,” Hermantown sophomore Blake Biondi said with a grin after leading the No. 1-seeded Hawks past unseeded Monticello 4-2 on Wednesday in the Class 1A state quarterfinals at Xcel Energy Center in St. Paul.

With his nerves sufficiently calmed, Biondi ramped up the beauty factor for his next two goals. He fired a rising shot into an opening the size of a hubcap for goal No. 2 and deflected a shot from the point under the crossbar for goal No 3.

The last of Biondi’s goals, his 30th of the season, came with 2:31 left and gave No. 1-ranked Hermantown (21-6-2) its final two-goal cushion in a game that was eerily reminiscent of last year’s meeting between the two teams in the championship game. The Hawks won that one 4-3 in in double overtime for their second consecutive state title.

“They sure make us earn it, I’ll tell you that,” first-year Hermantown coach Pat Andrews said.

The Hawks, appearing in their ninth consecutive state tournament, raced to a 3-0 lead only to see Matt Miller score twice for Monticello (19-8-2) in a span of 1:28 in the second period to make it 3-2.

“We got in their head when we put a couple away on them,” Miller said. “We knew we had a chance.”

Sophomore Blake Biondi scored three goals and added an assist as tournament top seed and top-ranked Hermantown held off unseeded and unranked Monticello 4-2 on Wednesday in the Class 1A quarterfinals at Xcel Energy Center in St. Paul.

The game was a rematch of last year’s state title game won 4-3 in double overtime by Hermantown, the two-time defending state champion. The program has appeared in nine consecutive state tournaments.

The tight-checking, back-and-forth game almost lived up to the teams’ previous state tournament meeting. The outcome remained in doubt until Biondi deflected a Darian Gotz shot from the point with 2:31 left to give the Hawks (21-6-2) their 4-2 lead.

Back-to-back goals by sophomore Matt Miller pulled the Moose (19-8-2) to within 3-2 early in the second period. Miller scored on a screened, long-range shot with 13:38 left in the period, then converted on a breakaway attempt 2:17 later after stealing the puck from Hawks defenseman Sam High.

With Monticello’s Kalebe Holme in his face, Biondi scored his second goal to put Hermantown up 3-0 less than 2 minutes into the second period. Biondi broke free from the tight-checking Holme long enough to kick a loose puck on his stick and fire high over Monticello goaltender Tyler Klatt’s shoulder.

Hermantown struck early, scoring two goals in the opening 6:44. Biondi opened the scoring 2:47 into the first period with an off-speed flip of the puck from the slot. The fluttering, arcing shot sailed over Klatt’s shoulder for Biondi’s 28th goal of the season.

Jacob Herter put the Hawks up 2-0  just more than 4 minutes later when he shot a loose puck in the slot past Klatt. Biondi was trying to kick the puck forward onto his stick but instead sent it toward the open Herter. The goal was Herter’s 22nd of the season.

Herter flashed some hustle in the late stages of the first period, catching Monticello’s Troy Dahlheimer, on a partial breakaway, from behind and deflecting Dahlheimer’s shot attempt.