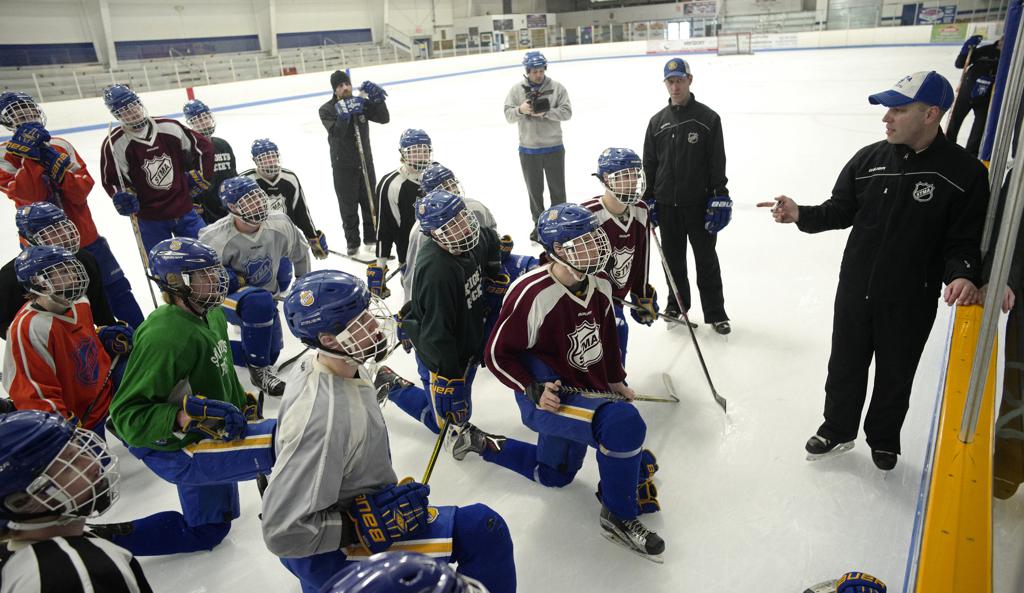 The neighboring towns of St. Michael and Albertville never have been mistaken as twin hockey hotbeds. A wrestling community? For sure. Home of an outlet mall? Most definitely.

As for hockey, mostly there’s just been considerable confusion about the name of the towns’ combined program.

“I remember going to youth tournaments and the announcers would be like, ‘St. Albert Michaelville,’ ” St. Michael-Albertville senior captain and defenseman Garrett Sandberg said. “They couldn’t even pronounce our names right.”

Proper pronunciation shouldn’t be an issue at 1 p.m. Thursday when the unseeded Knights (23-5) skate onto the Xcel Energy Center ice in St. Paul for a Class 1A tournament quarterfinal matchup against No. 3 seed Duluth East (23-2-3). With St. Michael-Albertville reaching its first boys’ hockey state tournament in the program’s 40-year history, the recognition factor already is ramping up.

“This morning I woke up and I was hungry, so I went to the grocery store and got doughnuts, and three people I’ve never met came up and shook my hand and said, ‘Congratulations,’ ” sophomore forward Adam Flammang said. “I was thinking, ‘I don’t even know you, and you are congratulating me.’ ”

The Knights never had advanced past a section semifinal until this year. They went a step further last Wednesday, stunning traditional power Moorhead — last year’s state tournament runner-up — 6-5 in the Class 2A, Section 8 title game in Bemidji.

Now folks in the two communities, located roughly 30 miles northwest of Minneapolis and 40 miles southeast of St. Cloud, are buzzing about their high school hockey team.

“It’s awesome to have everyone in the school excited because were are going to state,” Sandberg said. “That’s just the talk around town right now, ‘The hockey team is going to state.’ ”

United by their high school, St. Michael and Albertville have a combined population of about 24,000. There’s no Target or Walmart in either of the towns. Trips to the grocery store, as Flammang experienced, often double as a meet-and-greet.

“The community itself still has a small-town feel,” said Jerr Johnson, in his 13th season coaching the Knights. “That’s one thing that the people really love when they get here. If you are a teacher or a coach, you’ll run into five people you know before you walk out of the grocery store.”

Adding to the hockey excitement is the construction of a second sheet of ice adjacent to the St. Michael-Albertville Arena. The $9 million expansion project is expected to be completed in November. Construction of new athletic facilities, including a football stadium complex, are underway at the high school, located in Albertville.

“It’s kind of a perfect storm for us,” Johnson said. “All of sudden we are building another sheet of ice, and these guys are going to state.”

The high school program has benefited from a youth association that welcomes involvement from the high school’s coaches. Knights assistant Jason Johnson, Jerr’s twin brother, has served as the director of the association’s hockey operations committee. Jerr Johnson also serves on the committee as the boys’ hockey liaison. Cory Laylin, the Hamline University men’s hockey coach, is the boys’ hockey operations committee coordinator. Among his duties is “coaching the coaches” on USA Hockey’s American Development Model.

The Johnsons’ involvement “has made all the difference in the world,” said St. Michael-Albertville Youth Hockey Association president Josh Opiola, who has watched the youth program grow from fewer than 400 skaters four years ago to more than 600.

As the communities have grown, so has the school and its achievement level.

Activities director Keith Cornell, a former Knights assistant football coach, said the high school’s enrollment has grown from 700 when he started in 2000 to 1,900. He said enrollment is expected to plateau at about 2,400 in the next five to 10 years.

Baseball, girls’ basketball and girls’ soccer teams have been regulars at the state tournament. The wrestling team won its first outright state Class 3A championship Thursday.

The football program recently moved with success into the state’s highest classification. Academically, the school routinely ranks among the state’s top 10 based on results of state-required tests and how well it prepares students for college.

Having won 70 percent of the Mississippi 8 Conference championships over the past five years (including the past four hockey titles), St. Michael-Albertville will apply this spring to join the Northwest Suburban Conference for the 2019-20 season, Cornell said. If denied entry, the school could apply to join the small but ultracompetitive Lake Conference.

This week, though, the Knights are just thrilled to have the opportunity to educate the State of Hockey on what the acronym STMA is all about.

“Even last year, when we went to the state tournament to watch the games, a couple people were like, ‘STMA? Is that St. Mary’s Academy? Is that St. Thomas Military Academy?’ ” Sandberg said. “So nobody really even knows who we are.

“It’s just good to get our name out there and show people who we actually are and what actually we do here.”