Mr. Hockey finalist Garrett Worth had a hat trick and goalie Parker Kleive stopped 28 shots in a 5-0 victory. 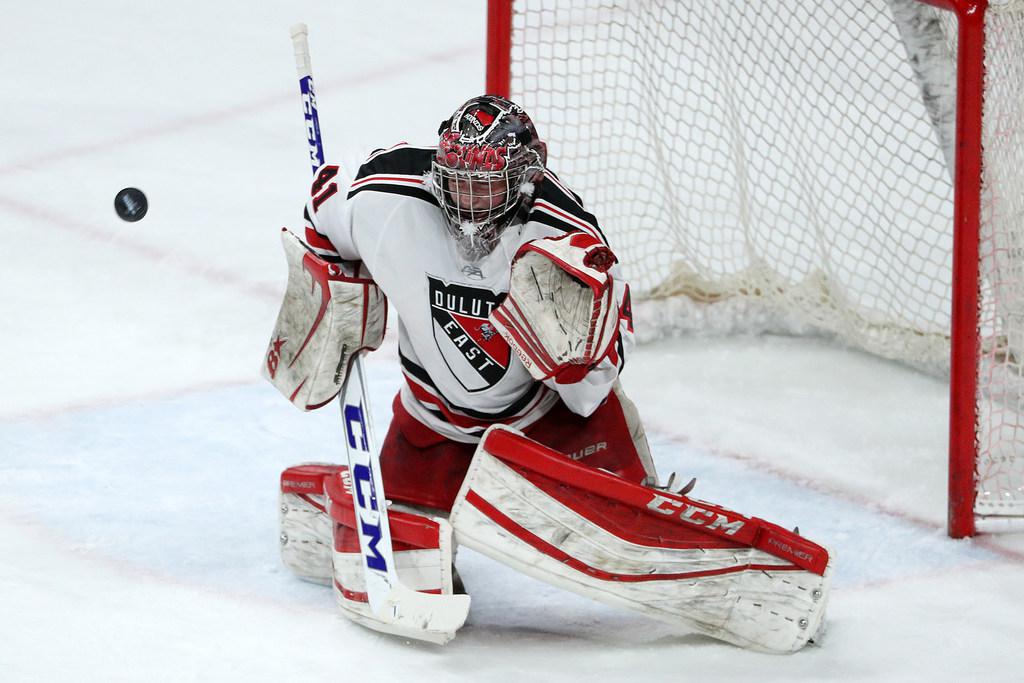 Duluth East goaltender Parker Kleive reached out to grab the puck in the first period. He made 28 saves in a 5-0 shutout of St. Michael-Albertville. Photo: ANTHONY SOUFFLE • anthony.souffle@startribune.com

Yet Worth knows well the former Duluth East star from the mid-1990s. Worth has punched Spehar’s name into YouTube searches hundreds of times, committing to memory every big goal — and there were dozens of them — that Spehar scored.

“Oh yeah, before I go to bed at night I like to watch videos of Dave Spehar, that’s kind of my thing,” said Worth, who did his best Spehar imitation Thursday. He scored three goals in No. 3-seeded Duluth East’s 5-0 victory over unseeded and first-time tournament entrant St. Michael-Albertville (23-6-0) in the Class 2A state quarterfinals at Xcel Energy Center.

Worth’s three goals give him 45 this season, tied for the most in the state. Spehar scored 58 goals in 1995 and 54 in 1996, notching five hat tricks in six state tournament games.

Worth “has a gift that not all players have,” said Duluth East coach Mike Randolph, in his 29th season, of the 5-9 Mr. Hockey finalist. “And I’ve seen all kinds of goal scorers.”

Worth opened the scoring early in the first period, scored again early in the second and completed the hat trick to end a three-goal flurry for No. 3 state-ranked Duluth East (24-2-3) over a span of 2:05 late in the second. Worth’s WMD linemates, seniors Ian Mageau (goal, two assists) and Ryder Donovan (two assists), contributed to the rout.

“They just move the puck around, tic-tac-toe, and they find the net,” St. Michael-Albertville senior defenseman Garret Sandberg said about the Greyhounds’ top line.

In a performance reminiscent of the run-and-gun Dave Spehar-led Duluth East teams of the mid-1990s, the No.3-seeded Greyhounds got three goals from senior Garrett Worth as they raced past first-time tournament entrant St. Michael-Albertville 5-0 on Thursday in the Class 2A state quarterfinals at Xcel Energy Center in St. Paul.

Worth scored the lone goal of the first period and opened the scoring in the second when No. 3 state-ranked Duluth East (24-2-3) erupted for four goals to take a 4-0 lead.

Sophomore Logan Anderson and senior Ian Mageau also scored in the second before Worth completed his hat trick with a goal off a deflection with 2:32 left.

Senior goaltender Parker Kleive was sharp while making 28 saves, including 11 in a scoreless third, to preserve the shutout.