James Miller, Luke Loheit and Matt Koethe scored first-period goals in a span of just more than 5 minutes to lead the top-ranked Skippers. 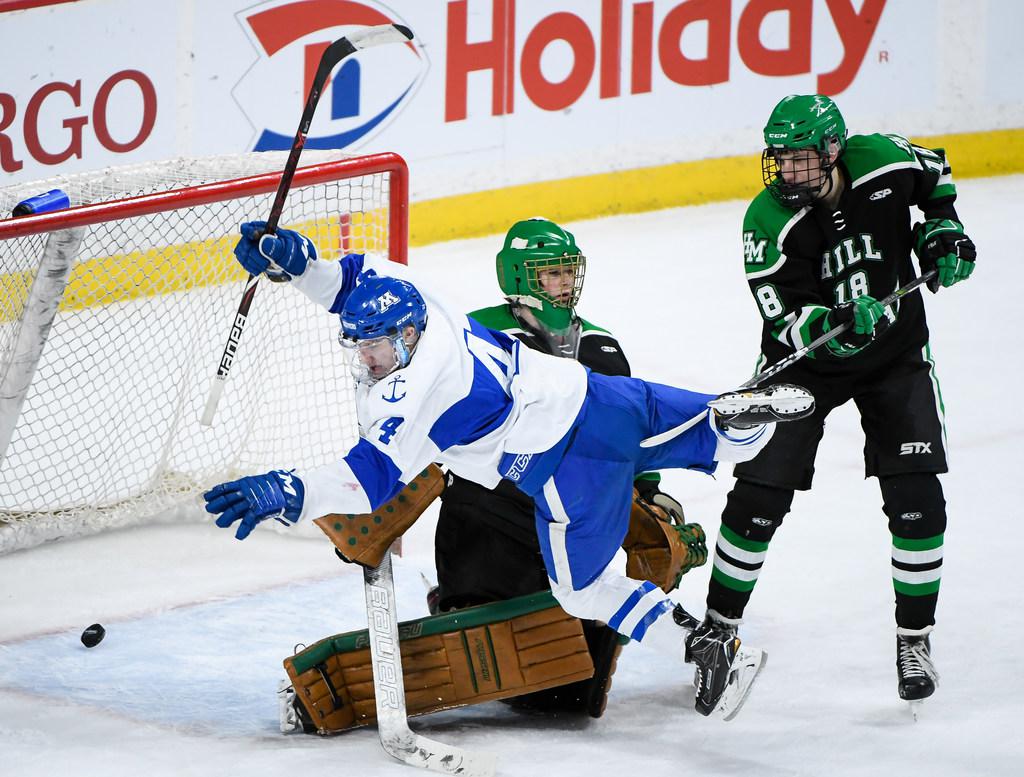 Start early. Finish strong. That’s been the rally cry for Minnetonka all season.

The Skippers, seeded No. 1 in the Class 2A tournament and ranked No. 1 in the state, backed their words with their actions on Thursday as they scored four first-period goals en route to a 6-2 quarterfinal triumph over unseeded Hill-Murray at the Xcel Energy Center in St. Paul.

All three members of Minnetonka’s all-senior line of Joe Molenaar, Luke Loheit and Matt Koethe scored in the opening period as the Skippers built a 4-1 lead. An all-important start for a team playing in the state tournament for the first time in eight years.

“You are not gripping the stick as tight anymore,” junior defenseman Grant Docter said about building the early lead. “The game comes to you a little easier.”

“One of our statements is you got to work harder after a goal,” Hill-Murray coach Bill Lechner said. “And that was disappointing.”

As for that strong finish, the Skippers killed a 5-minute major penalty to Loheit in the third, then got a shorthanded goal from Brink, his second of the game, while killing another Pioneer power play. Minnetonka has scored 14 shorthanded goals while allowing only 12 to opposing power plays this season.

“In the box, I knew they were going to get the job done, just like every night,” Loheit said.

Sophomore Bobby Brink scored twice and senior linemates Joe Molenaar, Luke Loheit and Matt Koethe each scored first-period goals as No. 1-seeded Minnetonka surged to an early four-goal lead en route to a 6-2 victory over unseeded Hill-Murray on Thursday in the Class 2A state quarterfinals at Xcel Energy Center in St. Paul.

Brink’s second goal came off a 3-on-1 rush as the Skippers were killing a penalty. He converted a pass from Josh Luedtke for his fifth shorthanded goal of the season, putting No. 1 state-ranked Minnetonka (25-2-2) ahead 6-2 late in the third period.

Joseph Quast scored 6:04 into the second period to pull the Pioneers to within 4-2. As with the first Hill-Murray goal, Minnetonka answered less than a minute later on a backhander by Bobby Brink.

Unranked Hill-Murray (13-12-4) outshot the Skippers 13-10 in the second, and Minnetonka goaltender Charlie Glockner was required to make several difficult saves.

Minnetonka scored three unanswered goals to surge to a 4-1 lead after the first period. James Miller, Luke Loheit and Matt Koethe scored in a span of just more than 5 minutes to put the Skippers ahead 4-1.

The game’s first three shots all resulted in goals.

Glockner finished with 22 saves while Keopple had 26.