A goal by Hayden Brickner late in the third period gave the Cougars a 3-2 victory over the fourth-seeded Cadets. 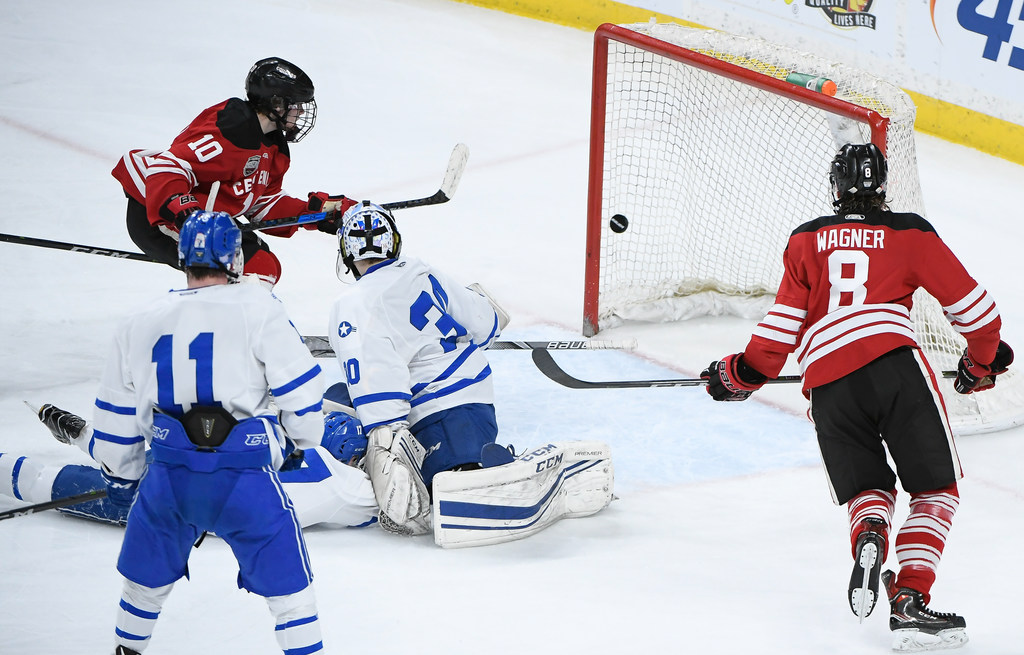 Centennial, 0-3-1 in games against state tournament teams this season, scored an upset of St. Thomas Academy to finally crack the victory column.

After trailing much of the game, the No. 5 seed Cougars did it in dramatic 3-2 fashion, defeating the fourth-seeded Cadets when Hayden Brickner scored the clinching goal with 3:32 left in the third period.

Goaltender Travis Allen made the lead stand, stopping all 14 third period shots. He made 33 saves overall and held the Cadet power play scoreless for the last 1:55 of the game.

Perhaps his biggest save came just 30 seconds into the third period, denying Ray Christy on a 2-on-1.

“It came down which goalie made the last save,” Cadets co-head coach Greg Vannelli said. “That save early in the third period and their short-handed goal made the difference.”

Jack Menne scored shorthanded to tie the game 2-2 at 7:41 of the third period. He and Carter Wagner befuddled St. Thomas Academy’s power-play unit, created the turnover and scored.

“I don’t think anyone was nervous coming into the game,” Menne said. “We had confidence in each other.”

The Cadets (25-3-1) jumped to a 2-0 lead after one period on goals from Cade Huntley and Ben Stucker.

No. 5 seed Centennial edged No. 4 St. Thomas Academy 3-2 for a Class 2A quarterfinal upset Thursday at Xcel Energy Center.

Hayden Brickner scored the go-ahead goal with 3:32 left in the game. He started the play with a hard check, followed the rebound of Andrew Stuart’s shot and buried the rebound.

Goaltender Travis Allen held off the Cadets from there. He finished with 33  saves.

Check back later for more on the game