Back where he started, Goldsworthy has No. 1 Skippers riding high

Sean Goldsworthy left St. Olaf to coach at Minnetonka, drawn back to his high school roots. 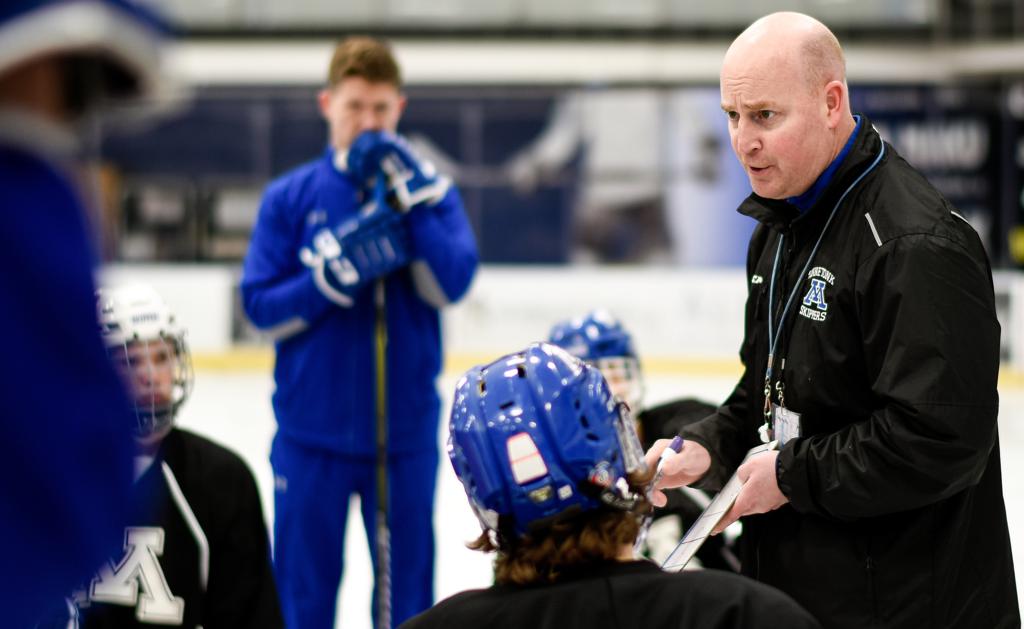 Minnetonka departed Braemar Arena late in the evening of Jan. 25, smarting from a 8-2 blowout by Edina. First-year Skippers hockey coach Sean Goldsworthy worried how his boys would respond.

To his delight, practice the next day felt loose and fun. Players rode the good vibes another 24 hours, winning 5-0 at Wayzata. They haven’t lost since, taking a 10-game winning streak and the top seed into the Class 2A tournament quarterfinals Thursday at Xcel Energy Center.

Living in the moment, eschewing regret, were welcomed reminders for Goldsworthy. His late father, flamboyant and popular North Stars forward Bill Goldsworthy, helped shape him as a player. His coaching role model was a man he called his “second father,” Whitey Aus, whom Goldsworthy played for at St. Olaf and then succeeded as coach.

Leaving the Northfield-based college in 2016 after a combined 23 seasons as player and coach, Goldsworthy said, “was hard on my heart. I put a lot of time and love into it.”

Less than a year into pondering an uncertain coaching future, Goldsworthy accepted the Minnetonka job and returned to his hockey roots. He served as captain on the 1989-90 Minnetonka team that placed third at the state tournament. His wife, Amy, and their daughters — Madigan, Emma and Lauren — endorsed the decision.

“It was important for me, my family and my soul to get back into coaching,” said Goldsworthy, who commutes about 45 miles each way from the family’s Northfield home. “I missed being around youthful energy, young people who cared about what they were involved in.”

His own enthusiasm fit the locker room like a broken-in skate.

“He brought a lot of new energy, and we really needed that,” senior forward Luke Loheit said. “He believed in us from Day 1 and that showed throughout the season.”

Defeating Edina two out of three times moved the Skippers to No. 1. A double-­overtime defeat of Holy Family Catholic clinched their first state tournament appearance since 2010.

“They certainly have a lot of talent,” said Mark Manney, Andover coach and president of the Minnesota Hockey Coaches Association. “But you truly develop winners when you combine skill, work ethic and the passion to play for the guy in the stall next to you. And I see Minnetonka’s kids playing for each other.”

Earning teammates’ respect is a family tradition. Bill Goldsworthy, who died in 1996, had been a North Stars captain. Sean’s oldest daughter, Madigan, captained Northfield’s team as a senior this winter. Loheit, his nephew, is one of two Skippers wearing the “C”.

“Being a good teammate means understanding your value on the team as well as other people’s value,” Goldsworthy said.

The message resonated with players and Goldsworthy alike: Live in the now.

“He’s happy to be home,” Loheit said of his uncle. “This is the place he needed to be and it showed this season.”