Orono, after blowing 4-goal lead, tops Mahtomedi in OT to advance to Class 1A championship

The Spartans' Dane Korsi scored 2:24 into overtime to lift the Spartans to a 5-4 victory over the Zephyrs. 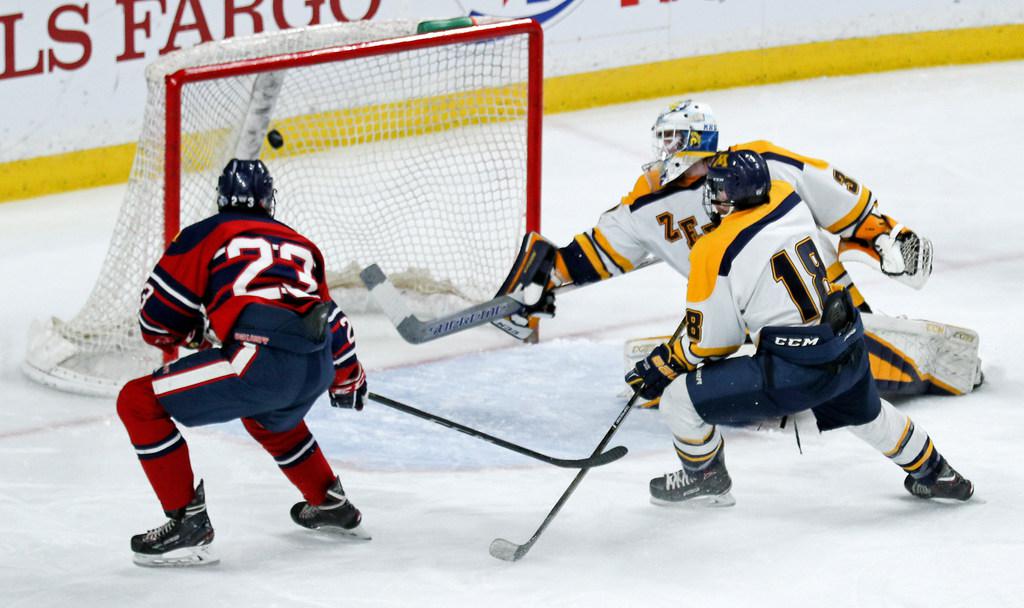 Orono’s Thomas Walker scored a goal on Mahtomedi goalie Bailey Huber for his third goal of the game in the second period. Photo: BRIAN PETERSON • brian.peterson@startribune.com

A blown four-goal lead did not alter Orono senior captain Thomas Walker’s message to teammates on the bench.

“I tell them all the time, ‘We made it this far. Why would we ever give up now? There’s no reason we should ever not give a 100 percent effort, especially at the state tournament,’ ” Walker said.

Wrestling a 5-4 semifinal victory from equally determined Mahtomedi took more than the 51 minutes of regulation time. Dane Korsi scored at 2:26 of the first overtime session, batting an airborne puck into the net.

The No. 3 seed Spartans (22-7-1) advance to play for the championship at noon Saturday at Xcel Energy Center in St. Paul. In its previous title game appearance in 2004, Orono fell 7-2 to Breck.

Orono sweated out a result that earlier seemed assured. Walker completed the hat trick and the Spartans built a 4-0 lead at 13:18 of the second period.

“From the very beginning of the year, if we were down by a goal or two, it wasn’t panic time, it was time to go to work,” Zephyrs coach Jeff Poeschl said. “This group never felt like they were out of the game.”

Four consecutive goals scored in a 5:18 span during the second and third periods tied the game. No. 2 seed Mahtomedi (22-6-1) outshot the Spartans 46-28 and carried all the momentum.

But Orono got the only four shots in overtime. Korsi, a former shortstop with a better bat than glove, swung and connected with a popped-up puck for the hockey equivalent of a grand slam.

Blowing a four-goal lead failed to unnerve Orono, which won a stirring 5-4 overtime victory against Mahtomedi on Friday in the Class 1A semifinals.

Dane Korsi scored at 2:26 of the first overtime session.

They came out flying in the third period, leading to a goal by Aidan Pearson just 15 seconds into the frame and another from Jeff Kneale at 2:03.

The Spartans advance to play at noon on Saturday at Xcel Energy Center in St. Paul. They face the winner of Friday’s second semifinal, No. 1 seed Hermantown or No. 4 seed Alexandria.