Jack Powell had a hat trick as the Cardinals advanced to their first title game, handing the Hawks their first loss to a 1A team in three years. 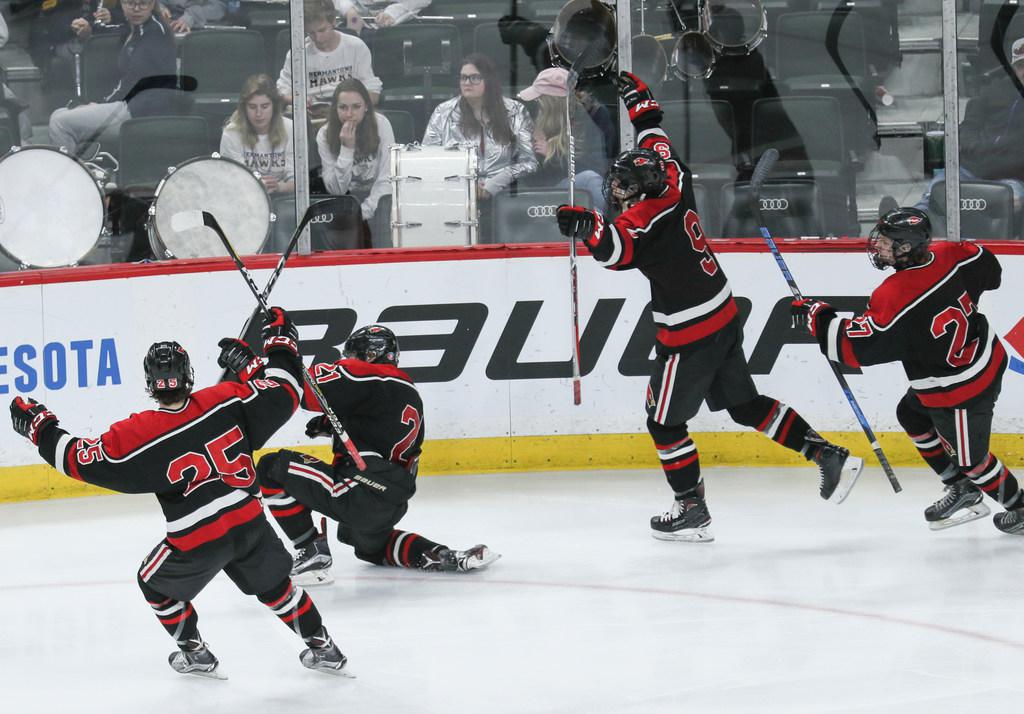 Eat your vegetables. Drink lots of water. Stay away from fast food.

The clean-living Powell scored a hat trick to lead the No. 4 seeded Cardinals past No. 1 seed and two-time defending champion Hermantown 6-1 on Friday in the Class 1A semifinals at Xcel Energy Center in St. Paul.

"I just wanted to do so much for the boys,” said Powell, a defenseman described as a “fitness freak” by Alexandria coach Ian Resch. “You just got to believe. Everyone (on the Cardinals) knew that we were going to win this game.”

Powell’s contributions to the victory could be found all over the ice, as could Hermantown (21-7-2) players left spinning in his wake. No goal was bigger than Powell’s early in the third period.

With Alexandria (19-10-1) leading 2-1, Powell grabbed a loose puck off a face off in the Cardinals’ zone and raced to the other end, zipping around standout Hermantown defenseman Darian Gotz before befuddling Hawks’ goalie Cole Manahan with a deke and quick shot.

“His speed is dangerous,” Resch said about Powell, who had scored eight goals all season before the tournament and couldn’t remember his last hat trick before Friday’s signature performance. “He found a hole, and away he went.”

“He’s a (heck) of a player,” Hermantown coach Pat Andrews said of Powell, who works out at least three days a week before school and lists beans, rice and chicken among his food staples. “He controls the puck and really does a nice job.”

Burly senior defenseman Jack Powell scored three goals and added an assist as No. 4 seed Alexandria stunned No. 1 seed and two-time defending champion Hermantown 6-1 on Friday in a Class 1A semifinal at Xcel Energy Center in St. Paul.

Evan Lattimer scored into an empty net with 53 seconds left to cap the scoring.

Alexandria’s Caleb strong scored the only goal of the second period to take a 2-1 lead when he took a backhand feed from defenseman Powell and shoveled a shot over Hermantown goaltender Cole Manahan’s outstretched leg with 2:38 left.

Hermantown (21-7-2) controlled play for long stretches of the second period, unloading 17 shots on Alexandria goaltender Jackson Boline. The Cardinals had five shots in the second.

Hermantown’s Brady Baker opened the scoring midway through the first period with a shot through a screen from the top of the circles. Alexandria tied it at 1 less than 3 minutes later on a power-play goal by Powell.

Alexandria outshot Hermantown 7-5 in the first.

The Hawks’ last loss to a Class 1A team was a 5-4 overtime setback against East Grand Forks in the 2015 state championship game.