A long-range shot that turned into a fluttering, improbable goal keyed the Greyhounds en route to a 4-2 victory. 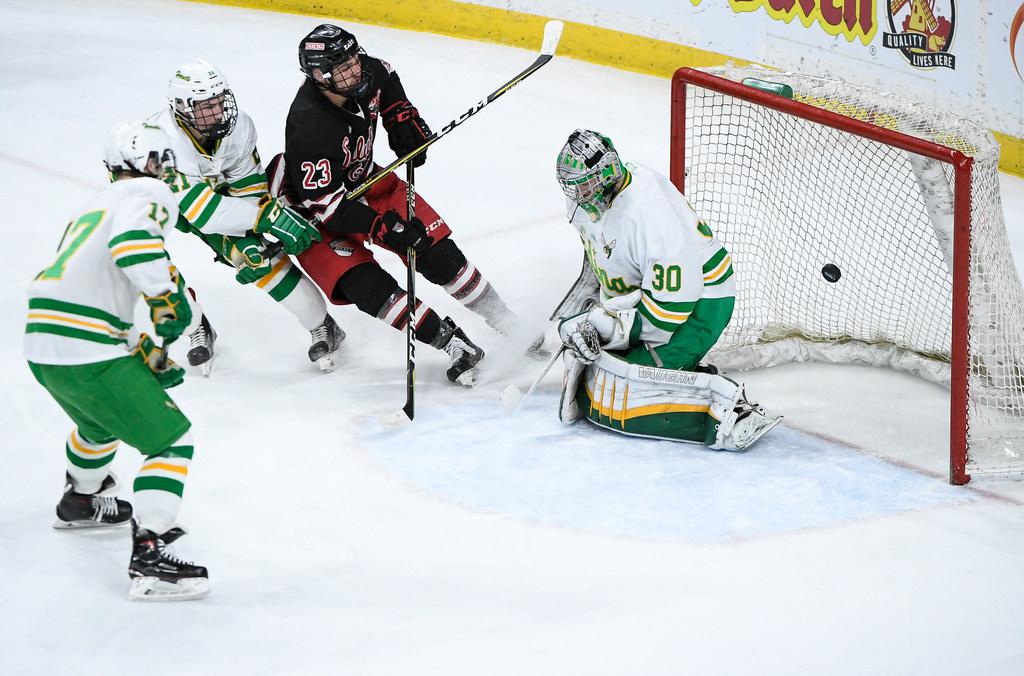 That’s what Duluth East defenseman Frederick Hunter Paine thought to himself as he stood well beyond the blue line and contemplated firing a puck on the Edina goal.

Schooled to shooting the puck on net from all angles and distances, Paine did as he has been told. He scored one of the most improbable goals in state tournament history and, in the process, lifted No. 3 seed Duluth East past No. 2 seed Edina 4-2 on Friday in a Class 2A semifinal at Xcel Energy Center in St. Paul.

Paine’s long-range shot bounced squarely off the blocking glove of Edina goaltender Garrett Mackay, then sailed straight up toward the bright arena lights. The puck fluttered as it came down behind Mackay’s left arm, then bounced a couple of times before dribbling in the net.

There were a lot of wows in a game that featured the No. 2 (Edina) and No. 3 (Duluth East) teams in the state rankings. Most of the bounces, big saves and key moments were in the Greyhounds’ favor, just as they have been most often over the years when these teams meet on the big stage. The Greyhounds have won five of six state semifinal matchups of the two teams dating to 1995.

Call this one the “Flutterpuck Game.’’ Paine’s goal was the kind you would see in a Hollywood production, not in a state tournament matchup that was otherwise a mostly tight-checking, ice-clogging, mistake-free affair.

“It was one of those flutterballs,” Edina coach Curt Giles said of Paine’s goal with 7 minutes, 52 seconds remaining. “That puck is round but it doesn’t always bounce round. It just kind of got up there and hard to see, and the next thing you know it is on top of him.

“This game is a weird game at times.”

Edina’s Mason Nevers scored less than 2 minutes after Paine’s goal, and Edina had several prime chances to tie the score in the closing minutes. That’s when Duluth East senior goaltender Parker Kleive, who finished with 24 saves, was at his best.

Kleive, who stopped a first-period breakaway attempt by Edina’s Jett Jungels to set the tone, stonewalled Edina star Sammy Walker on numerous close-range attempts. On one of those saves, the puck bounced in the slot to Nevers.

But Duluth East defenseman Carson Cochran landed on his back in the crease and stopped Nevers’ shot.

“I don’t know how many blocked shots we ended up with,” Duluth East coach Mike Randolph said. “We knew coming in that we wouldn’t have the puck a lot, because they are that good.”

Junior defenseman Federick Hunter Paine’s goal midway through the third period proved to be the game winner and No. 3 seed Duluth East upended No. 2 seed Edina 4-2 on Friday in the Class 2A semifinals at Xcel Energy Center in St. Paul.

The victory continued the Greyhounds’ mastery over the Hornets in state semifinal meetings, as Duluth East has won five of six matchups dating to 1995.

Paine’s goal was scored in improbable fashion, as his long-range shot was blocked by Edina goaltender Garrett Mackay. But the fluttering puck sailed high into the air, and Mackay lost sight of it as it came down behind his left arm, bounced in the crease and dribbled over the goal line.

Ian Mageau put Duluth East ahead 2-1 with 5:28 left in the first when he wheeled past Edina defenseman Mason Reiners and fired a shot over the leg pad and under the arm of Hornets goaltender Garrett Mackay.

Edina scored first on brilliant solo rush by third-liner Evan Shoemaker, who sped around Duluth East defenseman Will Fisher on his way to the net. The Greyhounds tied it 1:13 later when Worth launched a hard shot past Mackay for his 46th goal of the season.

Worth had one of the best chances in a scoreless second period, ripping a shot off Mackay’s catching glove in the final minute.